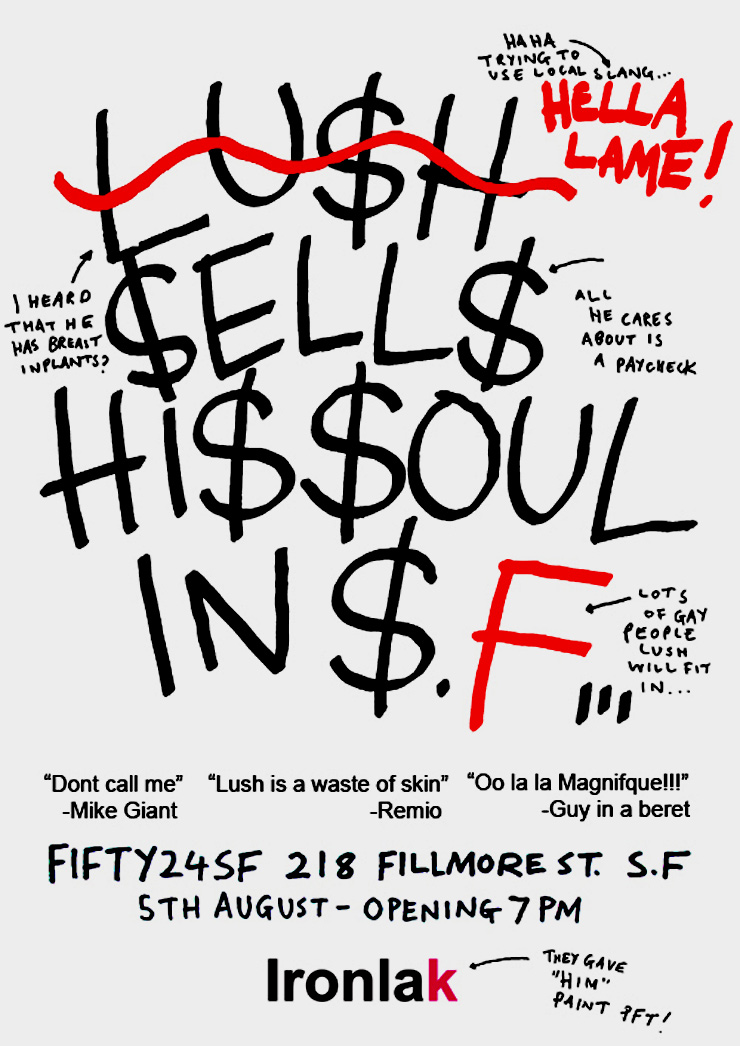 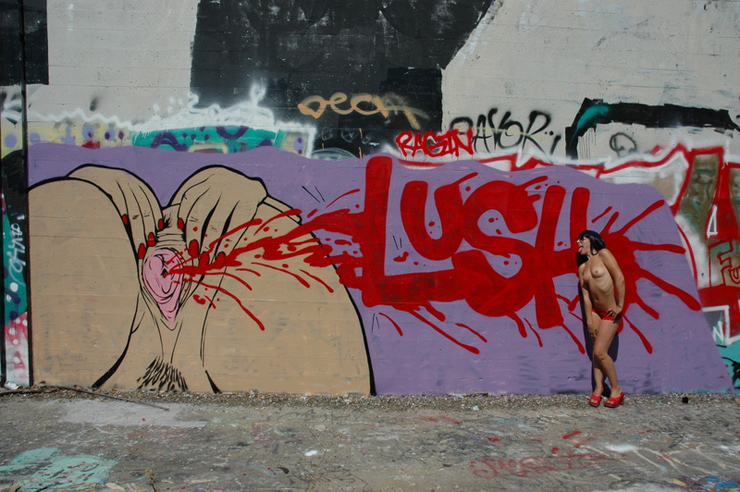 LUSH is a graffiti writer who likes porn, kittens, and making people angry. His work features male and female genitalia juxtaposed with comedic messages and comic book illustrative style. He sometimes makes people, especially other members of the graffiti community, upset with his pornography graffiti, tongue-in-cheek videos, and unfiltered twitter and interview statements. When he is at his most theatrical, LUSH makes artwork inspired by other graffiti writers, created in an absurdist style demanding a call and response. Some see the work as equally offensive, equally humorous. His recent photo shoots require naked female models/strippers/porn stars to interact with his graffiti. In a recent conversation, LUSH has called Larry David an idol. Is he serious? Who the fuck does this guy LUSH think he is?

Known as both a controversial talent and grand shit talker, LUSH comes to FIFTY24SF Gallery as a much-talked about artist who has invigorated the Flickr and Twitter community over the past 24 months with the spread of his graffiti. For his first solo show in San Francisco, LUSH explores the idea that gallery shows should be events more than a place to see art. Example: If you like women naked in front of your graffiti, bring the nudity to the gallery. LUSH and team have created a real-life installation peep show, featuring models from San Francisco’s iconic nude revue, the Lusty Lady. The exhibition will also feature a new series of works on canvas. Mostly, LUSH plans on keeping up on some contemporary shit-talk.

LUSH asks that you remember to bring your $1 bills to the show.

Miss Van x Swoon x BSA : Unveiling Masked Ladies for Heliotrope Prints
Here is the first public look at the new print by Miss Van which she made especially to aid Heliotrope programs in Haiti and Braddock, Pennsylvania for Swoon and Heliotrope Prints. The limited run p...
Mae Jean & Mary Reese Grace The Arizona Desert with Jetsonorama
Jetsonorama. Mae Jean & Mary Reese. The Painted Desert Project. Navajo Nation. (photo © Jetsonorama) Mata Ruda and LNY are on their way out to The Painted Desert Project with Chip Thomas (Jetso...
BSA Images Of The Week: 02.20.17
We have a lot to show you this week of art from the street, museum, and studio. This horrid and chaotic political environment is proving to be fertile soil for the growth of politically themed w...
Happy New Year 2021 From BSA
Congratulations to you for making it to 2021 ! With gratitude to you for all of your support and with hopes for your health and serenity, we wish BSA readers a Happy New Year. The Creator (pho...
BSA Images Of The Week: 07.12.15
Here's our weekly interview with the street, this week featuring ASVP, Dain, D. Hollier, Dee Dee, Free Humanity, Homo Riot, Hunt, Jorit Agoch, Myth, Old Broads, Philippe Herard, Solus, The Elect...
Brooklyn Street Art CA FIFTY24SF Gallery LUSH San Francisco