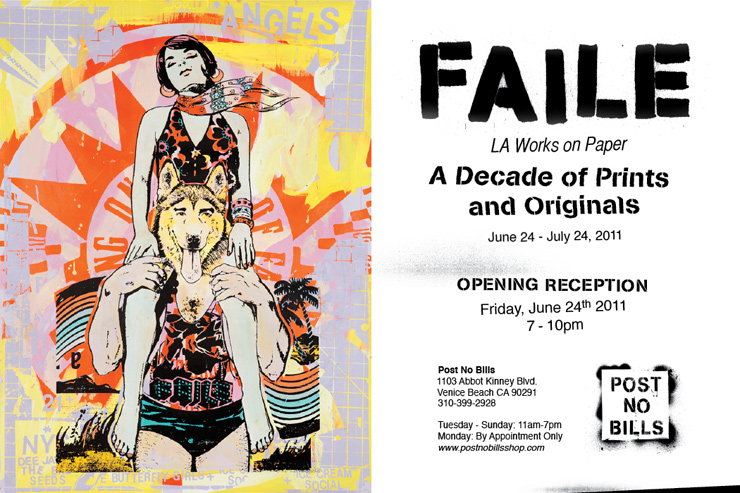 LA Works on Paper
“FAILE: A Decade of Prints & Originals”

The highly anticipated opening of the Venice Beach-based print shop,
POST NO BILLS launches with a unique ten-year retrospective from the
acclaimed Brooklyn-based artist collaborative− FAILE.

Recognized for their bold graphic imagery gracing street, museum and
gallery walls worldwide, FAILE− the multimedia artist duo−
celebrates their roots in printmaking with over a decade’s worth of
archived works on paper, limited edition prints and hand painted
originals− many of which have never been offered to the public
before. POST NO BILLS is pleased to release several exclusive print
editions produced onsite.

Join FAILE, Steve Lazarides and Jordan Bratman for the groundbreaking
launch of POST NO BILLS and the opening reception for “LA Works on
Paper” on Friday June 24, 2011 from 7-10pm.

FAILE is the Brooklyn-based multimedia artists Patrick McNeil and
Patrick Miller. From a prolific and groundbreaking Street Art
collaboration that began in downtown New York in 1999, FAILE has
expanded their practice in the studio to the walls of galleries and
museums worldwide.

In the studio, FAILE recreates the in sitú appearance of plastered,
torn and weathered posters from the street on to canvas, and puzzle-
like, multi-part wooden boxes, pallets and crates. Continually
recycling while expanding the vocabulary of their most recognizable
works FAILE creates original imagery that takes the visual vocabulary
of popular culture, consumerist vernacular and the fantastical –
remixing them into raw yet captivating narratives. Through this
process FAILE explores notions of duality: love versus hate, peace
versus war, violence versus beauty, revealing a frenetic tapestry that
weaves together disparate elements of the urban landscape.

FAILE has traveled internationally for the last 10 years – from
Palestine to Berlin, London to Shanghai – contributing its striking
iconography and dexterous style to city walls, buildings and bridges
all around the world.

The term POST NO BILLS is commonly identified in stencil form – on
barriers erected around construction sites in an effort to deter clean
walls from being altered. Generally speaking, this practice produces a
contrary effect. Our founders subscribe to the notion that breaking
rules generally inspires more ingenuity than following them. Which is
why POST NO BILLS was created.

Tuesday – Sunday: 11am – 7pm
Monday: By Appointment Only

JACE in Grigny, France Brings the "Gouzou"
“Gouzou” are on the loose in Grigny, thanks to their creator, French graffiti writer and muralist JACE. JACE. Wall Street Art Festival 2019. Grigny, France. (photo © Galerie MathGoth) A childr...
BSA Film Friday :01.22.16
Our weekly focus on the moving image and art in the streets. And other oddities. Now screening : 1. Narcelio Grud: Public Music Box 2. OXYGEN: Michael Beerens for #Cop21 3. Vera van ...
Artmossphere Dispatch 1 : L'Atlas, Sepe, Martha, and All Female Graffiti Jam
This week BSA is in Moscow with you and Urban Nation for Artmossphere 2016, the 2nd Street Art Biennale, a group exposition introducing 26 Russian and 42 foreign artists who were shaped by street ...
A Mural Jam and Censorship: Fighting for Freedom Of Expression In Barcelona - Part I
Freedom of expression is foundational in a democracy. Without it, it is not difficult for a culture to descend into authoritarianism, fascism, and dictatorship. By many standards, Spain’s democracy i...
Axel Void and DalEast In New Delhi for St+ART India 2015
Axel Void and DalEast are somehow brethren here in New Delhi at the 2015 edition of St+Art India, if not because of a shared style then because of a shared appreciation for things you cannot see - alc...
Brooklyn Street Art CA Faile Post No Bills Venice