Shai Dahan misses New York Street Art. But he’s discovering new inspiration in Sweden, and finding an emotional component in his work he didn’t know before, and its’ exciting. As the Street Artist and fine artist prepares for his solo show May 27th at Artpace and Us Gallery in Gothenburg, Sweden’s second largest city, he is also bringing the natural world to the streets.

“Finding Street Art in Sweden is like trying to find a deer in Manhattan,” Shai remarks as he gets a little nostalgic for the layers of built up wheat pastes and posters that clump together in certain parts of New York’s streets. “I think that was a huge part of the inspiration as well – finding the torn wheat pastes and dripping dry stencils on the street. They really had my mind think about texture and color combinations.” 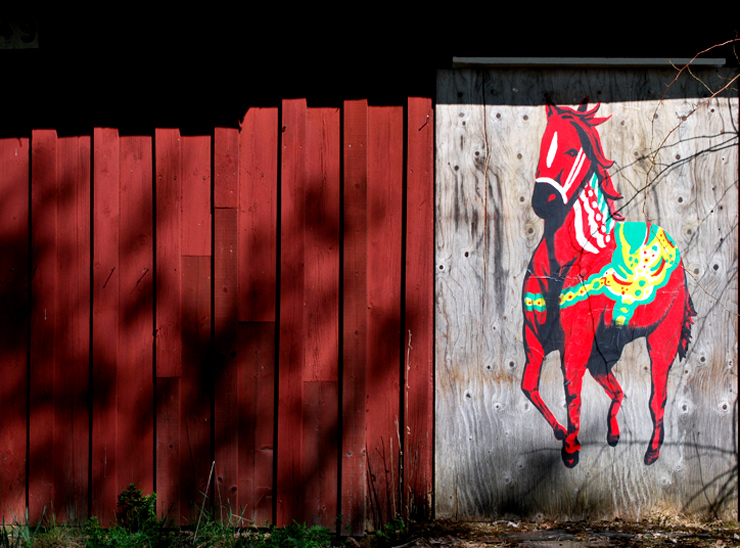 “It is a bit funny to me that in New York, with the exception of a short cab ride to Central Park, I had a lack of access to nature and animals, whereas here I miss the street art that I could find with the ease of taking a cab ride down to the Lower East Side.”

You can see the effect of Shai’s new home in his work; horses, deer, zebras, birds are featured through out. Can’t imagine that there are too many zebras wandering through his backyard. Thinking about that a little, maybe his animals are more symbolic than literal. “The natural elements, the green forest, it all has a huge inspirational affect on my work and me I think for me, the biggest transition was influence to inspiration,” he explains. “When I was in New York, the city, the art on the streets, the culture, all of it really had a big influence on me even if I didn’t think it did.  It all came out one way or another into my work.  Once I moved here, I really was more inspired than influenced.” 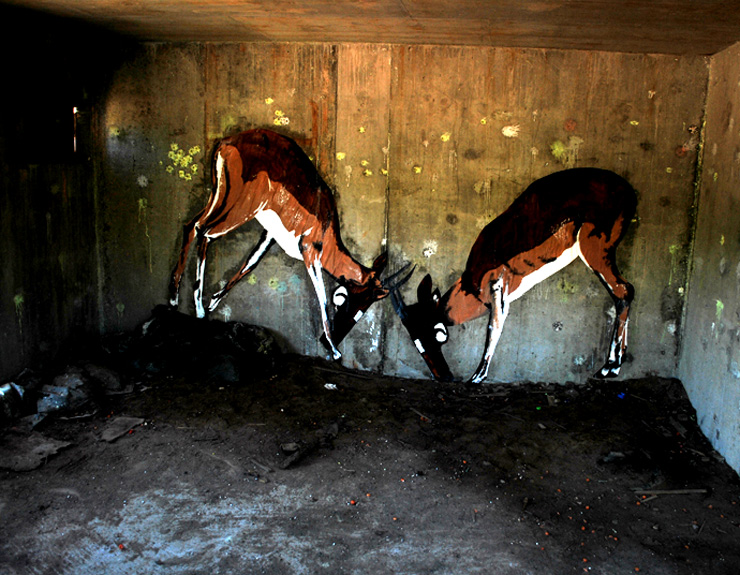 Of course he has brought his guns from New York. His bird guns that is. And now deer guns too. A busy entrepreneur on the New York street art scene, his Bird Gun blog has given shine and opportunity to a number of street artists looking to stretch their wings.  His own design of the same name, an iconic merging of a New York pigeon with a revolver, is undergoing a reinterpretation in his new home, and taking on  additional meaning for him as he reflects on “man v. nature” mythology. “The animal/gun hybrid always expressed the never-ending need for animals to protect themselves or feel like they had a choice to fight back. We only hunt animals because we feel we know how to pick up a gun. The animals are just fighting adaptation. When humans kill animals, it is considered a sport but when any of these animals harm a human, it is a threat or savagery.” 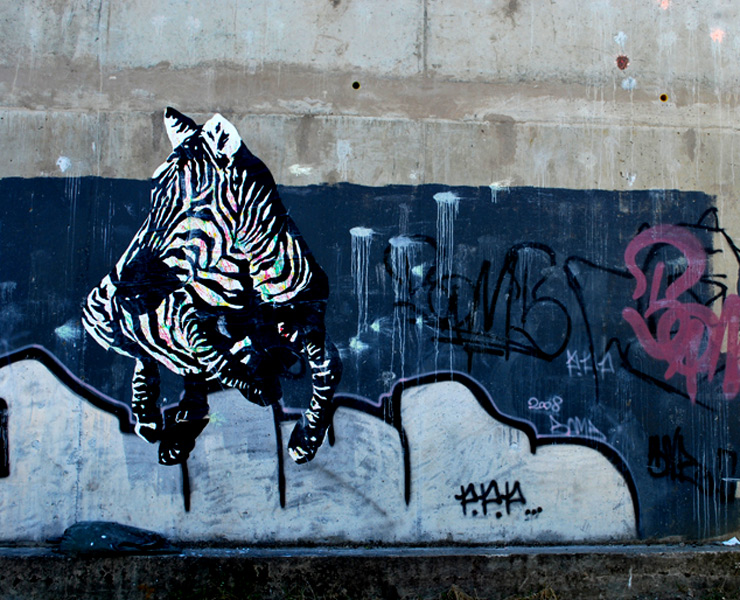 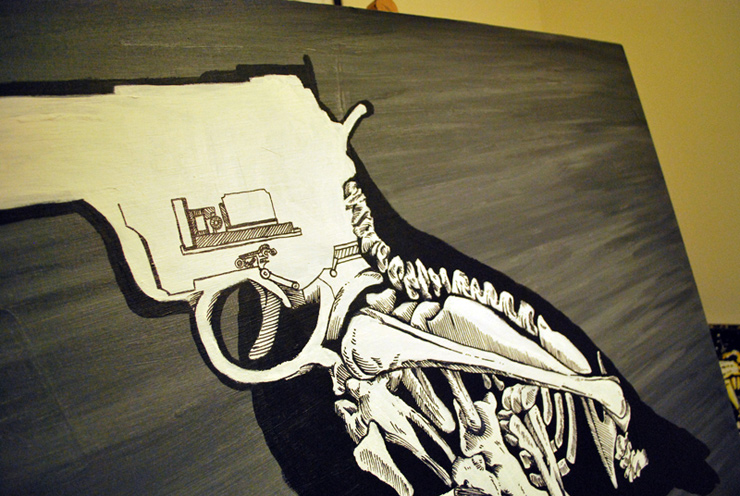 You have heard people refer to living in New York as a rat race, and with good reason. For Dahan in his new environment, the inclusion of so much animal imagery in his new work has been a study of the relationship between humans and animals. “Those paintings really symbolize the “fight or flight” aspect of the natural world.  Animals can’t really fight back and we humans tend to feel very brave knowing we can have power over them. We hunt for fun; we set fires and cut trees down.  It makes us feel powerful.  It is a very strange dynamic.” 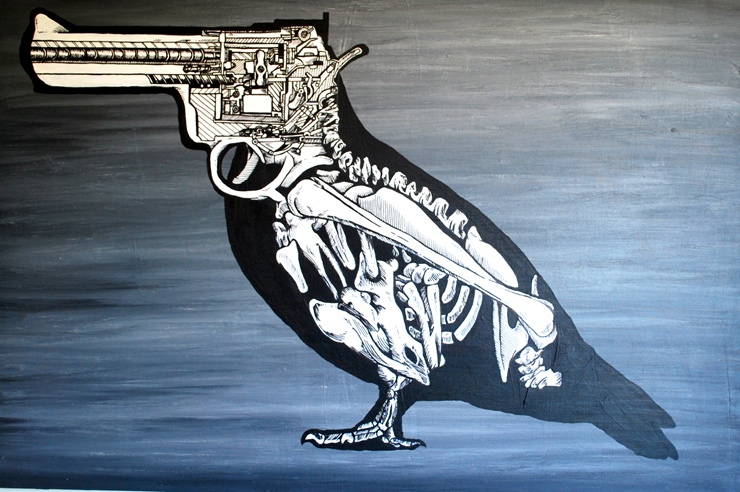 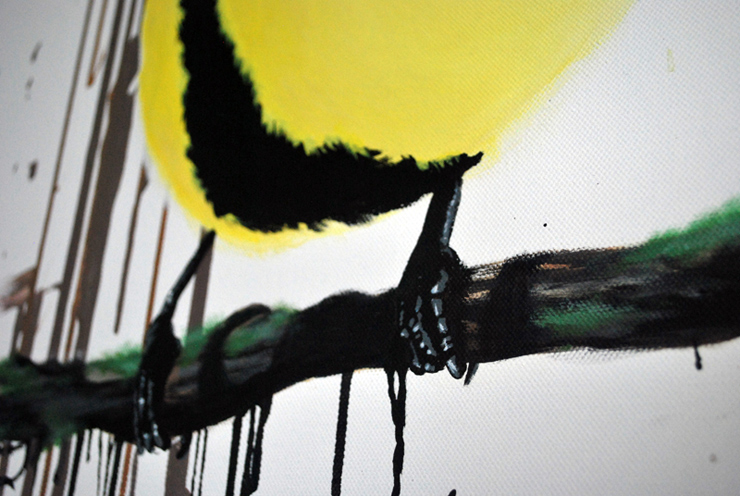 It’s relevant to explore core assumptions about the world with regularity, especially during these times of continuous tumult. As an artist, change can be a strong motivational tool to re-examine work and open areas previously unexplored. It looks like Shai Dahan is on a journey and he’s sharing it with you.

Taking the broad view of the new work, Shai reflects on his growth, “I am very proud of the work for the solo show. I think I am most proud of the pieces because they are very emotional.  My paintings for this show really show the level of emotion and transition I endured when I moved.  I began working for this show only a month or so after I moved here and you can really see the different emotions I was going through.  It is expressed a lot by the colors, the movement in the brush strokes, the imagery itself…all of it really is what I went through as an artist moving from the Big Apple to…the small Smorgasbord.” 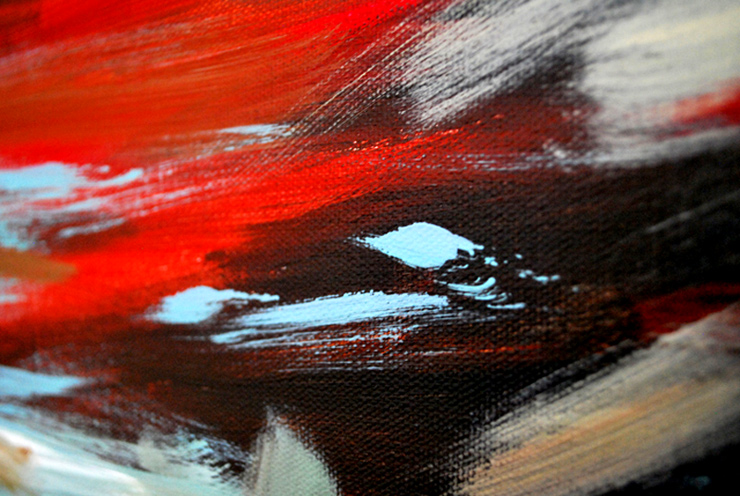 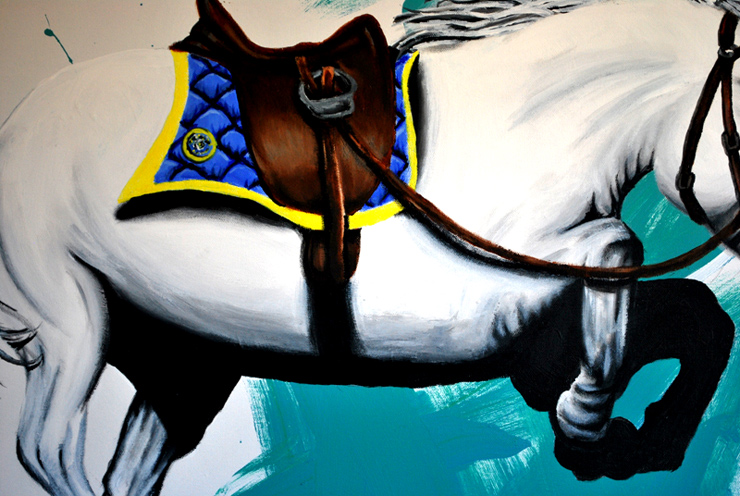 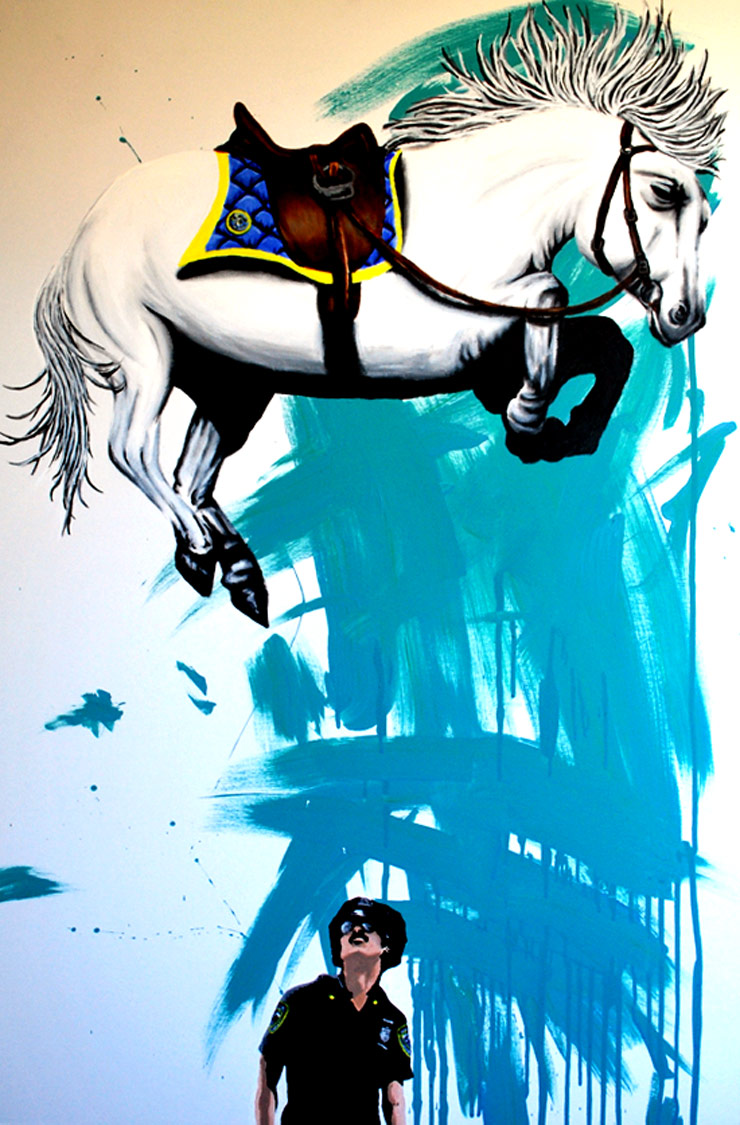 Salton Sea Road Trip with Eddie Colla, 2wenty, Caratoes, and Nite Owl
New images today from the barren detritus by Salton Sea in the Colorado Desert near the San Andreas fault line. Here near the water is a landscape littered with sheet metal, stories, tumblewee...
Urvanity Murals - Artez, Marat Morik, Poni, and Pro176
As part of the offerings on the street this year in Madrid, the Urvanity fair featured four artists creating new murals in the nearby environs to the Colegio Oficial de Arquitectos de Madrid (COAM) ...
Indecline in Georgia: Respect Existence or Expect Resistance
“Atlanta has long been considered a black Mecca,” the summary of the latest INDECLINE press release opines, “And yet it only takes a quick drive out into the country to be standing at ground zero of ...
DETROIT: Murals In The Market. Dispatch 1
This week BSA is in Detroit with our hosts 1XRun for the Murals in the Market festival they are hosting with 50+ artists from various countries and disciplines and creative trajectories. In a city t...
Figurative Dispatch From Cuenca, Spain.
So far the activity of traipsing through a town to discover new Street Art, graffiti, and murals will not put you at risk of contracting a virus. Daniel Eime. Barrio San Antonio. Cuenca, Spain, (p...
Artspace Gallery Brooklyn Street Art Gothenburg Jaime Rojo Shai Dahan Steven P. Harrington Sweden Us Gallery