Responding to a museum show that brings Street Art inside and charges admission to see it, a local Street Artist tweaks the nose of MOCA’s “Art in the Streets” with some actual Street Art in situ. Ironically, it also drew a crowd of curious admirers to the sidewalk.

Eddie Colla says his billboard takeover is a response to a Huffington Post article last week where a finger wagging tone was on display toward current street artists, “MOCA director Jeffrey Deitch pegs it on the ‘young’ and ‘anarchic,’ and is quoted giving this message to illegal taggers: ‘If you harness your talent you can be in a museum some day, make a contribution and a living from it.’ ” 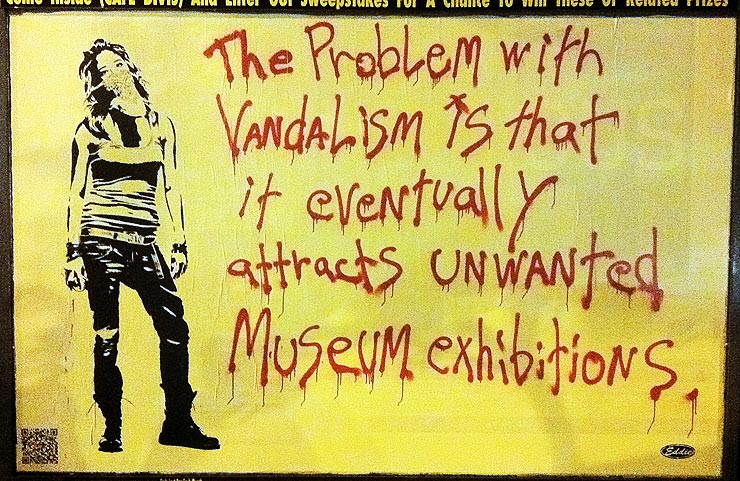 A testament to the current fascination among teens, 20 and 30-somethings with the entire topic of Street Art, observers report that the installation of Colla’s piece drew a small crowd of tourists, who took turns snapping photos and posing in front of it – some of which we show here. Even more incredibly, after the poster company covered it and left yesterday, witnesses say a bystander apparently began removing the advertising posters. 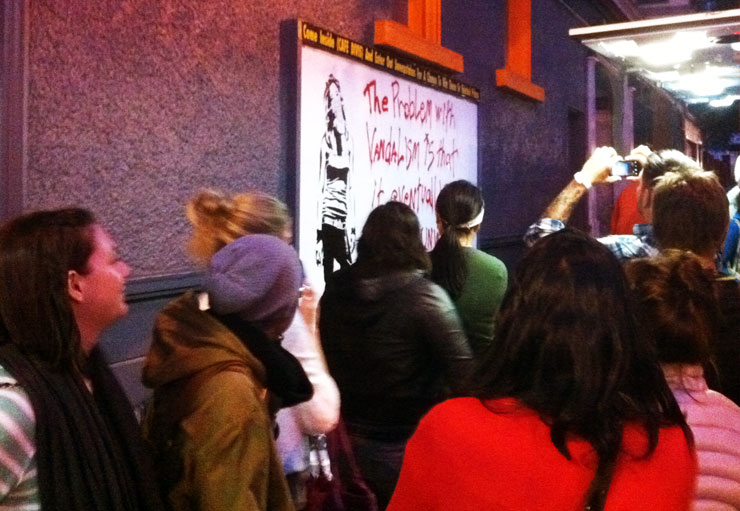 Reached for comment, the artist told us the message of the piece is pretty self evident and he hung around after putting it up to listen to people stopping to take pictures.

Brooklyn Street Art: What kind of reaction did the installation get on the street?
Eddie Colla: It ranged from “Is that Bansky?”, “Are you Banksy?”, “I think that’s f*ckin Banksy”, and “Holy sh*t! It’s Banksy”. Of course there’s the one nob who always mispronounces Banksy and says “Yo It’s BAN-SKY”. So there was that and a couple “hey cools” and “what do you make your stencils out of?” and “you’re eddie right?”. 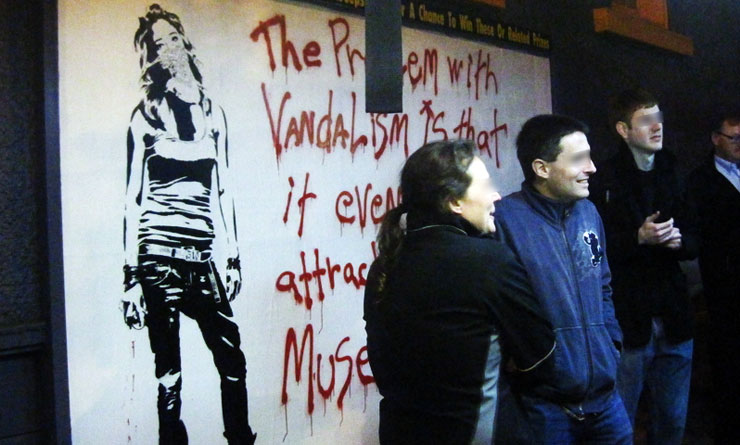 Brooklyn Street Art: Did you think that people would actually pose in front of it for a group photo?
Eddie Colla: Sure why not, It’s a nice sort of background. Much better than the movie posters that were there when I started. 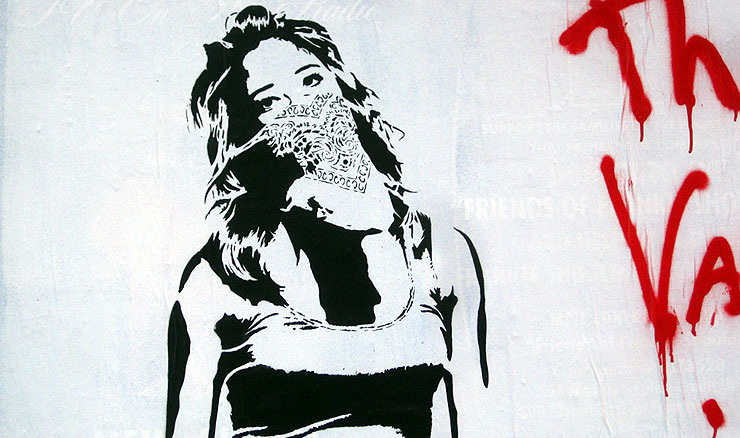 Brooklyn Street Art: When do you think this Street Art madness, I mean fascination, end?
Eddie Colla: When they release “Exit through the gift shop 2 – Electric Boogaloo”. I think that will be the beginning of the end.

El Sol 25, an Original Mix Master and Street Collagist
Like spinning multiple vinyl platters at 78, 45, and 33 RPMs on old beige school library record players, this is a low-fi mixmaster whose visual style stands singularly, compelling and jarring. You ...
Ein Wandblatt Aus Wien Issue #3: Erotik Edition
Who says zines died with the printing press? The Internet may have completely redefined how we communicate but the appetite for hand made independent publications has only strengthened in recent years...
BSA Film Friday: 11.25.16
Our weekly focus on the moving image and art in the streets. And other oddities. Now screening : 1. Fra Biancoshock: "Digital Vandalism vs Vandalism on Digital" 2. CANEMORTO: TOYS 3. D...
Ode to Spring 2019
We have been chasing this Spring 2019, beginning in Madrid late February Bilbao early March, mid-March the tulips in Berlin, then the warmth of spring in Queretaro, Mexico. Finally, we caught up with ...
Balancing 'Land Art' and 'Mural Art' in the Swiss Alps. Saype: "Vers l'equilibre"
“I just unveiled a new artwork in the Swiss Alps, in Villars-sur-Ollon,” Saype tells us when talking about the new 2500 m2 painting on a high grassy elevation. “’Vers l'équilibre’” (Towards balance) ...
Art In The Streets Brooklyn Street Art BrooklynStreetArt.com Eddie Colla Huffington Post Jeffery Deitch Los Angeles MOCA Street Art