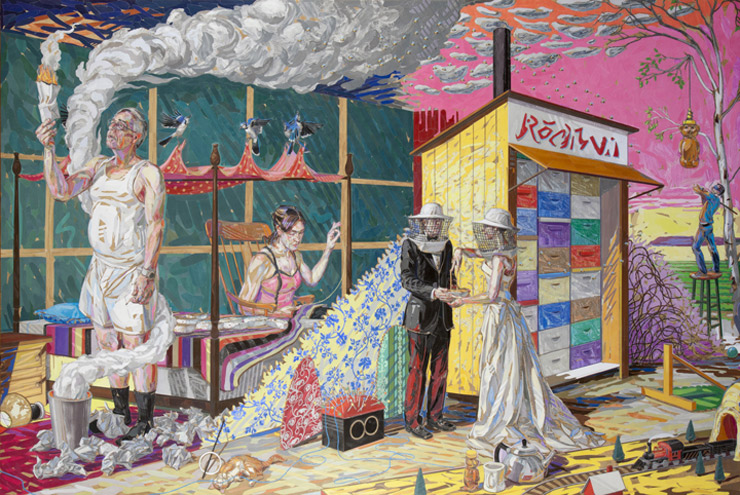 Never seen in public before, Brian Adams Douglas’ new massive (5 x 7) and three months in the making painting “Memory of You” will be the central focus of his new solo show. 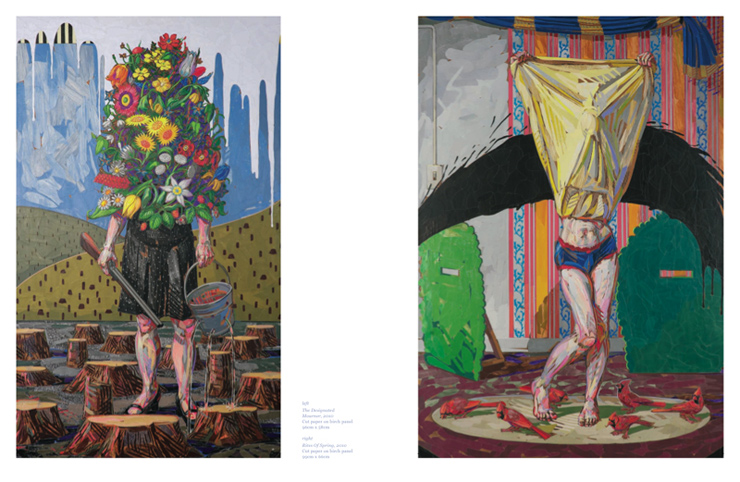 Black Rat Projects is pleased to present our next project with Brian Adam Douglas. Due Date, his first solo show in the UK, will be on view from March 10 – April 8, 2011. The opening will coincide with the launch of a book about his work, Paper Cuts, published by DRAGO.

Under the name Elbow Toe, Brooklyn based artist Brian Adam Douglas has been pasting his distinctive woodcuts, stencil work, large-scale charcoal drawings and collages onto the walls of cities all around the world throughout the past decade. His diverse practice is anchored by an interest in the human gesture as a powerful form of communication, one charged with unspoken narratives and he continually transforms public space into a stage for these private moments.  The scenes in his most recent body of work focus on the bewildering act of parenthood.  Just as he builds a finished image through the meticulous layering of tiny individual bits of coloured paper, so the meaning of the image is woven through layers of references to historically and culturally established narratives. This kind of intertextuality has become the foundation for the development of his distinctive style. The result is a sophisticated visual language where personal metaphors begin to communicate universal truths.

In Douglas’ work family life is a staged performance, animals are manifestations of human emotion, intense pattern breaks the jagged surface and functions like an ancient Epic storm: as his characters fight to find their balance the viewer holds their breath.

“For my first solo show in the UK, Due Date, I am exploring my preconceived notions of parenthood and the opportunities for growth that come through that process. I am presenting a series of narratives that flirt the line between fact and fiction; they are moments of autobiography that have been extrapolated to become allegories.  As an artist in the process of trying to become a parent and living in one of the most parent-centric sections of NYC, I am keenly aware of the mania that strikes at the heart of parents young and old. In these paintings I am addressing fears (loss of individuation as well as of the proverbial unknown), the strengthening of bonds in times of crisis, the issues of trying to become a parent later in life and the wisdom gained through the process of parenting.

The current body of work builds upon a process of art making that I have been refining for several years. I refer to the work as paper paintings rather than as collage. I see each piece of paper as a brushstroke rather than as a juxtaposed idea. Each brushstroke is selected for it’s color, value and texture, rather than it’s imagery”. Brian Adams Douglas

To read BSA interview and studio visit with Elbow-Toe click on the link below:

On the Shoulders of a Wizard : Os Gemeos and Mark Bode In SF
We continue our San Francisco street diaries with BSA contributing photographer Brock Brake and a mural from Os Gemeos and Mark Bodé, who together include a glorious technicolor tribute to Cheech Wiza...
Rafael Schacter Investigates "Street To Studio"
“These are artists who are thus not slavishly reproducing their exterior practice within an interior realm but who are, rather, taking the essence of graffiti – its visual principles, its spatial stru...
Spanish Tipplers Frolic in Falset, Spain: Marina Capdevila Celebrates Her Roots
A certain sunkissed and saucy lust is coupled with all manner of vice for the frolicking senior set that is often featured in scenes by the muralist, painter, and illustrator Marina Capdevila from Ba...
Wall Therapy 2017: An Intersection of Art, Celebration and People Power : Dispatch 2
With a theme of "Art and Activism", the 2017 edition of Wall\Therapy is happening mid-summer in Rochester with local and national artists coming to complete murals that keep people in mind. More o...
BSA Images of the Week 03.26.17 : Hong Kong Edition
This week BSA and Urban Nation (UN) are in Hong Kong for the 4th edition of HKwalls to capture a very international and local mix of artists in this East/West nexus; a world-class city for...
Black Rat Projects Brian Adam Douglas Brooklyn Street Art Drago Publising Elbow-Toe London U.K.