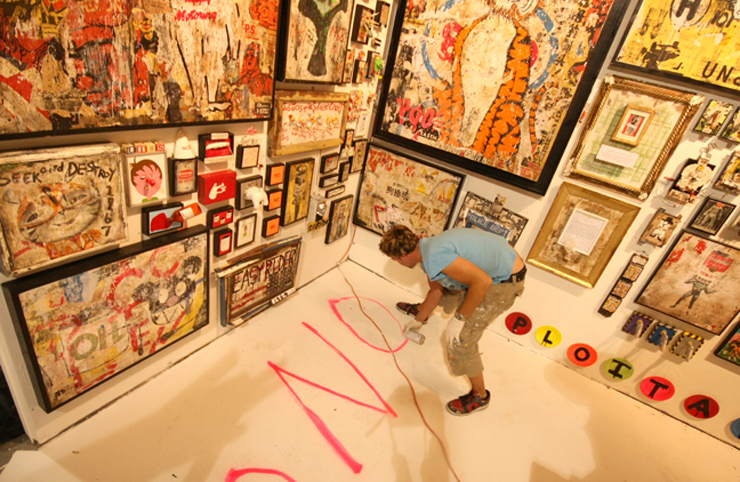 When you first encounter the artwork of Greg Haberny, you find yourself on a detour off the main road of contemporary art, exploring an alluring roadside attraction of weather-beaten highway signs, familiar childhood characters nightmarishly stripped of their make-up, and political and pop icons soaked in acetate. Though the images and creatures are entrancing, below the feeling of familiarity is a lingering discomfort, an unease that spreads throughout the subconscious. Be it politics, commercialism, or consumerism, Haberny scrapes images of their superficial veneer, revealing grotesque truths that are otherwise glazed over.

Inspired by family members practicing Impressionism and Folk Art, swayed by classic film and repulsed by the perversion of the human psyche, Haberny combines the beauties and the monstrosities of everyday life in a way that resonates with each viewer. His art takes on a life force of its own, deviously sinking into the dark corners of the minds of those who look.

When you come upon Greg Haberny in the maze of Fountain booths, you will discover yourself immersed in his version of a brave new world. Haberny goes beyond individual artworks, transforming his entire space into an all-consuming installation, an atmospheric sensory-overload. While we can’t reveal what Haberny has in store for Fountain NY 2011, his previous Fountain installations Pop Culture Wasteland and Wanker’s Ball ensure we are all in for a surprising, unruly, and uniquely-Haberny experience.

“Presenting a solid mix of street art, fine art, installation, performance, and all around general creativity, the Fountain Art Fair was a breath of fresh air for those tired of the white tents and fancy cocktails.” —Warholian.com

“A New York favorite, Fountain is the [fair] we always check out for punk, funk, and unvarnished bolts of creativity. With a number of Brooklyn galleries, artists, and undercover rebels getting into this mix, you never know what you are getting, but there will be something mind blowing.” —Brooklyn Street Art

“Possessed of a scrappy, youthful verve lacking in its more prestigious neighbors… Fountain was distinguished by a vintage street/self-taught aesthetic…” —ArtForum

“The way an art fair should be.” —The Economist

“For a riverside art fair with more grit, the Fountain Art Fair truly delivers. Named after Duchamp’s famous urinal, this one had the piss and vinegar…. It’s this scrappy energy that augurs well for the continued vitality of art in the age of the declining Dow.” —Time Out New York

Fountain Art Fair was founded in 2006 as an attempt to leverage support for smaller independent galleries to gain access to larger collectors and critics. Since its inception, Fountain has held five exhibitions in Miami, one in Chicago, and is now celebrating its sixth exhibition in New York. From its roots deep within the independent Williamsburg art scene, Fountain has grown to represent over 20 international avant-garde galleries and projects, showcasing progressive primary-market works. Fountain’s venue, Pier 66 Maritime, is a 10,000 square-foot complex adjacent to all the major New York exhibitions such as The Armory Show and Pulse New York.

Fountain is an exhibition of avant garde artwork in New York during Armory week and Miami during Art Basel Miami Beach.

BSA Images Of The Week: 01.28.18
Stumbling and slipping and dancing through January here in New York requires dexterity and a tolerance for dry skin and flattened hat-hair and the occasional sore throat.  Thankfully there are g...
THE BSA PRESENTATION “ON THE RADAR” IS MOVED TO SUNDAY AUGUST 23RD
Hello Friend! Just to let you know the BSA EVENT DATE at Coney Island Museum has changed to AUGUST 23RD THE BSA PRESENTATION “ON THE RADAR” IS MOVED TO SUNDAY AUGUST 23RD Many exciting new deve...
"Sprout And Ruler": Gola Hundun Nude In Abandoned Masonic Temple (VIDEO)
Street Artist Gola Hudun likes to get naked and frolic around abandoned old buildings making art. But then, who doesn’t? Gola Hundun for Artesano Project 2016 in The Dominican Republic. (photo ...
BSA Images Of The Week: 06.14.15
Hillary Clinton was on Roosevelt Island yesterday formally announcing her candidacy under blue skies with an enthusiastic crowd speaking about income inequality and the poor and sounding more po...
Sr. X Makes an Escape
Spain’s Sr. X has a good knack for placement with his realistic figures incorporated into the streetscape, whether peering out from a broken façade or up from the edges of a pothole. Sr. X "Bye" Lon...
Armory Week Art Fairs Brooklyn Street Art Fountain Art Fair Manhattan New York City