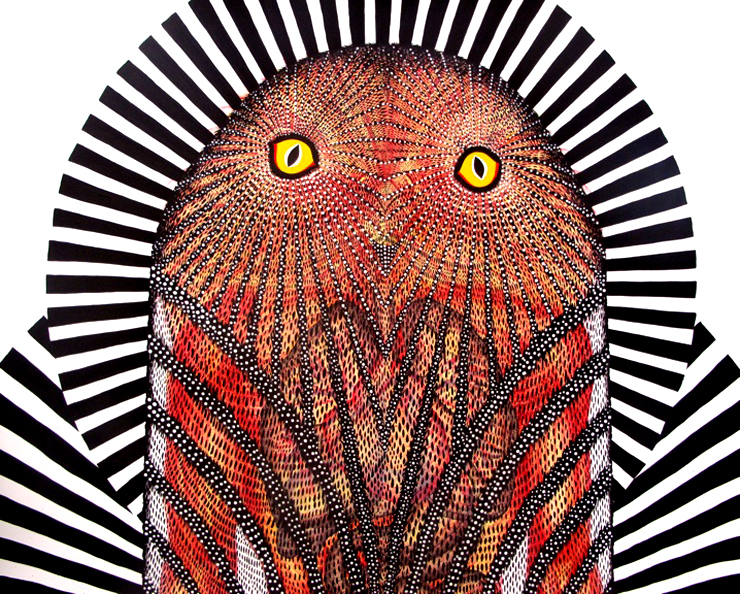 Mola Salsa
David Ellis’s newest exhibition, Mola Salsa explores process with 15 new works on paper and a new motion painting. Reflecting on images from his childhood in rural North Carolina, David draws animals, trees, clouds and images dear to him. For this exhibition Ellis engages the idea of the animal spirit to depict his ideas of transformation. Ellis also makes imagery derived from plumes of smoke and steam originally inspired by witnessing an active volcano. These linear works he calls “flow” also describes rivers, both above and below the surface. This language embodies his belief that no condition is permanent.

In the project room Ellis will show his most recent motion painting “Animal.””Animal” is a 10-minute, high-definition, edition of 6, commissioned by Landmarks in Austin, Texas in 2010. Motion painting is a time based media technique that renders the process of painting into a cinematic experience.

In ancient Roman religion, mola salsa (“salted flour”) was a mixture prepared by the Vestal Virgins and used in every official sacrifice. It was sprinkled on the forehead and between the horns of animal victims before they were sacrificed, as well as on the altar and in the sacred fire. It was a common offering to the household hearth.[1]

In his explorations of movement, change, and rhythm David Ellis effectively combines his talent for visual representation. By utilizing various elements of music making-collaboration, improvisation, timing, and repetition- Ellis enlivens his creative process and thus his viewer’s experience through intricate experimental videos and complicated kinetic sound sculptures. David Ellis has exhibited at the Museum of Contemporary Art, San Diego, PS1, and the MOMA, New York to name a few. He looks forward to a forthcoming solo show this June in New York City, a solo booth project at Pulse, NY in March 2011, and an exhibition with Agnes B. before the end of 2011.

Meres One Says "Love Is Love"
When a real graffiti head hits you in the heart, you know it's going to burn brightly. NYC writer Jonathan "Meres One" Cohen has been getting up on the streets for 3+ decades with his distinctive ...
BSA Images Of The Week: 07.13.14
Apparently there is another spectacular sporting event that's got everyone captivated today and for a couple hours it will be easy to get a cronut or a seat on the subway because people will be w...
Nuart Day 3 : Picking Up Pace and Sandra Chevrier's Dramatic Eyes
A fever pitch is possibly overstating the tempo but not by much as Day 3 at Nuart continued to be wet and gray and at times a little windy (not typically good for stencil work by the way). A couple ...
Swoon's New Drawings for Heliotrope Foundation Benefit with BSA in NYC
Here is the first public look at eight of the new thirteen drawings by Swoon which she made while in Haiti a couple of week ago. She is donating her own work to aid Heliotrope Foundation programs in...
Davide DPA: Calligraffiti, Portraits, and Poetry at Pulpa 2022
Rounding out our week of Italian street artists and muralists, we see the newest by Davide DPA at the Pulpa Festival 2022 in Montesilvano. A city of the province of Pescara in the Abruzzo region of I...
Brooklyn Street Art CA David Ellis Los Angeles New Image Art Gallery