There’s no place like home under the bridge for the holidays, and QRST was feeling all fuzzy and warm and nostalgic for the days of his mis-spent youth over the Christmas/New Years break.

You may have seen QRST’s unusual hand-drawn illustrations of playfully tussling rat fights, wide eyed cats, and frumpy birds along with his series of everyday people (sometimes with wings). One common feature is the way they stare plaintively at you with just the slightest hint of burning outrage and/or accusation. Since it was the holidays and he’s not a splashy type, the Street Artist stuck to a big brown goose this time. 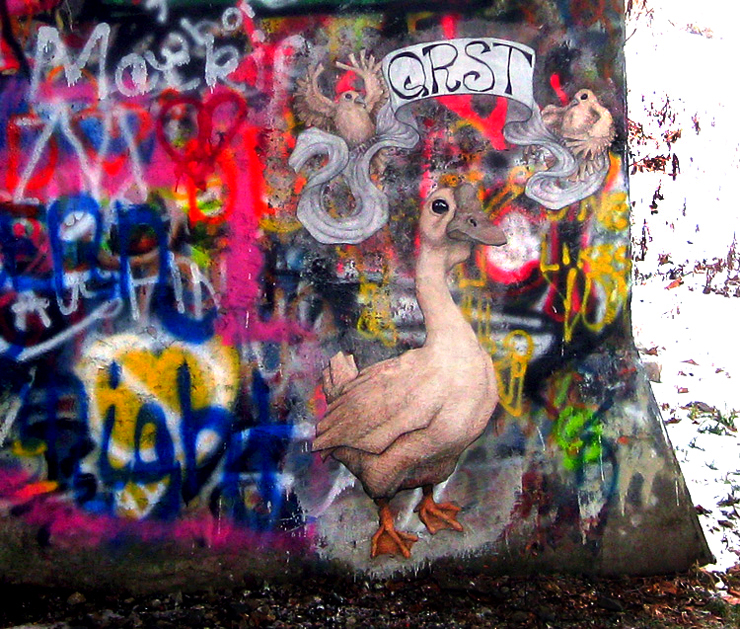 A modest brown goose, with a banner floating above (photo © QRST)

He tells us about this piece;

The goose “is often used as a symbol for the home and often more specifically the protection of the home,” he explains, “Brown geese in particular are often associated with humility; throughout Europe they were generally compared to the various orders of brown-robed monks; simple, unflashy and modest. I really like the way he’s falling into the wall. Being cognizant of my origins, having humility, putting it in a place where almost no one will see it, because it was really something that I was doing for myself, ended with this result. It’s quiet and very much fits into the environment, though it’s quite different from the flourescent, high school scrawls that are painted out there.”

Lest you think QRST is all kittens and rainbows, take a look at this recent piece on what appears to be an adjournment slip that’s been censored selectively.  He says this particular form has nothing to do with his street art, but since he still rocks some rebellious sentiments in his adult life, he enjoyed the simplicity inherent. 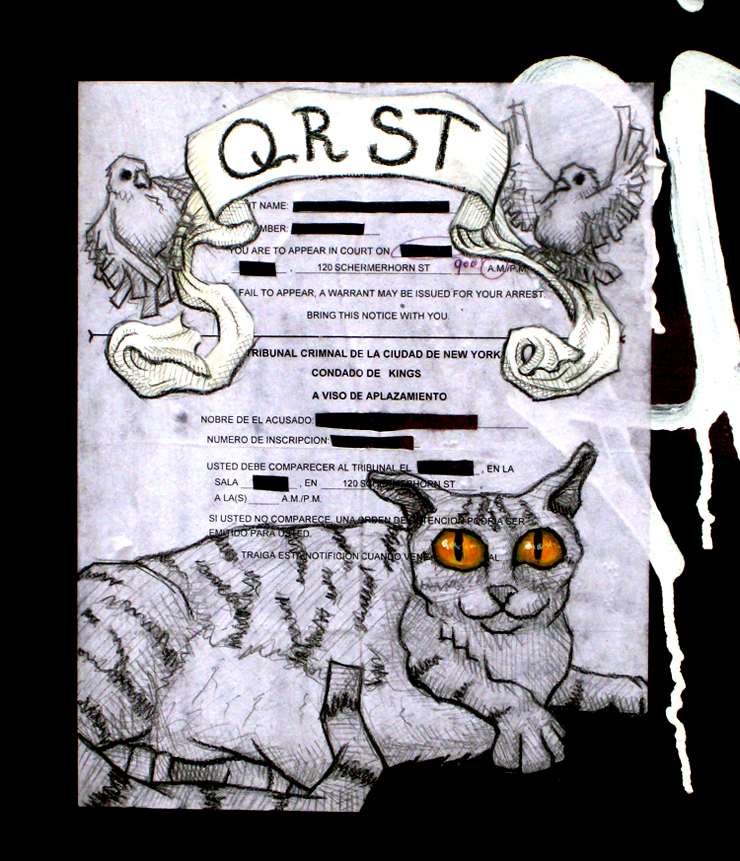 Fail to appear, a warrant will be issued for your pets (photo © QRST)

“The piece is sort of an adolescent flip-of-the-bird to the backs of authority… but then maybe there’s some of that in all good street work.”

I knew it! See what I told you about those stares… I could just tell that cat was saying “I just pooped next to the litter box. Deal with it.”

"The Nashville Walls Project 2017" Brings Jason Woodside and Ian Ross
"The Nashville Walls Project," a privately funded business improvement initiative in the downtown district referred to as “The Gulch” has already brought Street Artists like Rone, Above, Herakut, Curi...
San Salvador, Street Artists, Food Insecurity and "Conect-Arte"
Six street artists took their social engagement a step further in El Salvador last month and taught youth some serious skillz from the street. Coming from Brazil, Australia, Ecuador, Mexico, New York...
BSA Film Friday: 06.19.15
Rubble Kings. © Perry Kretz   Our weekly focus on the moving image and art in the streets. And other oddities. Now screening : 1. "Rubble Kings" : Gangs, Graffiti, Hip-Hop in 1970s NYC ...
Sebastien Waknine: “Learning from Migrants and Refugees” In Barcelona
Owing to the scarceness of resources that are usually allotted to those who arrive as refugees, Street Artist and muralist Sebastien Waknine relies solely upon the thinnest piece of charcoal as h...
Barbara Kruger and "The End of Roe"
As America’s corporately-funded liberal establishment has been busy policing everyone on identity politics to distract from the fact that they’re otherwise actively inactive, Barbara Kruger has remai...
Brooklyn Street Art Goose QRST