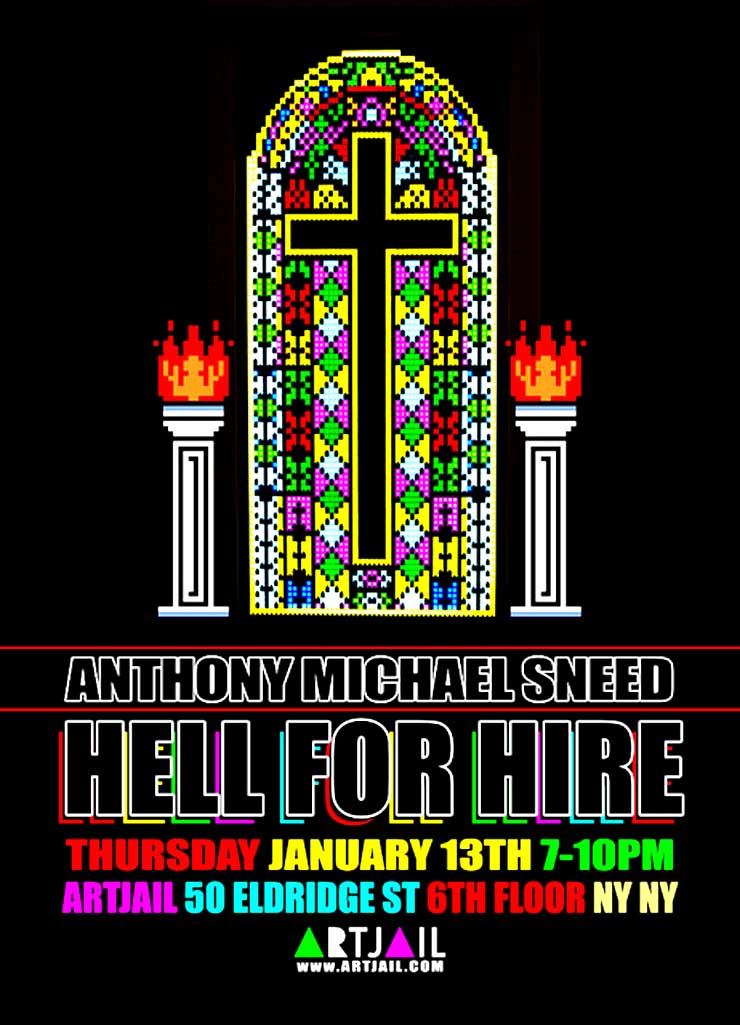 Anthony Michael Sneed is an emerging artist who will be having a pop-up show at ARTJAIL in NY this Thursday January 13th from 7-10. his exhibition entitled “Hell for Hire” is the culmination of work that has spanned over two years time. Embodying numerous mediums from canvas to Legos, and varying themes from JFK to the KKK, Sneed has amassed an impressive collection of work not only in scale but in content.

Anthony Michael Sneed is a multi-platform visual artist who lives and works in Brooklyn. As a small child, Sneed suffered an accident that crushed his right hand, temporarily disabling its use and thereby forcing him to become ambidextrous. The implications of being right handed and switching to left as a result of this trauma and the plausible impact it has on his right versus left brain functions fascinates Sneed and inspires inquiry into how that has translated in his work.

Legos, video games, and even the arts and craft association of the artist’s process are derivative of Sneed’s childhood memories. These tools and their application to the large-scale canvas comprise an ultimately self-referential language dominated by the basic geometric nature of the pixel. Angular shapes and rational lines constitute the visual framework across all the mediums in which he works and gives form to ideas, both abstract and conceptual. Rigid angles sharply contrast with the playful, tongue in cheek nature of his social commentary. Often incorporating early 80s 8-bit video game aesthetics, the resulting imagery can seem anachronistic or frozen in a particular time, juxtaposing the contemporary topical content with a conscious approach.

Anthony Michael Sneed has been selected by Shepard Fairey for an upcoming show at Subliminal Projects in LA and has shown with Leo Kesting in New York.