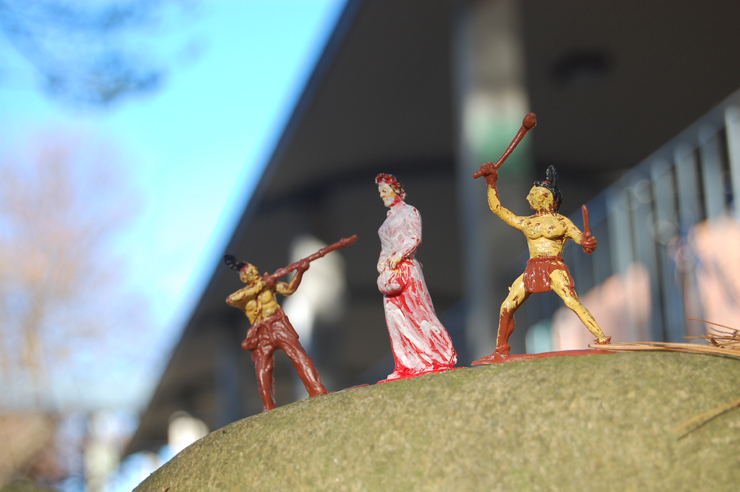 This scene depicts Jane McCrea, a British loyalist who was engaged to a man in the British army, who was captured by two Native Americans (photo © General Howe)

Street Artist General Howe participated this fall in an art/history show at Skidmore College by doing a site specific installation in Saratoga Springs, New York.  The project; “Saratoga Smackdown: The Expendable Jane McCrea and the Soldiers of Fortune” consisted of a series of installations showcasing the 1777 “Battle of Saratoga” on a farm in the Adirondack Mountain region. According to historical accounts, Jane McCrea, a preachers’ daughter, was killed during a perhaps botched hostage-taking, and her death was used for propaganda purposes to enrage locals to enlist with the Patriots against the British. 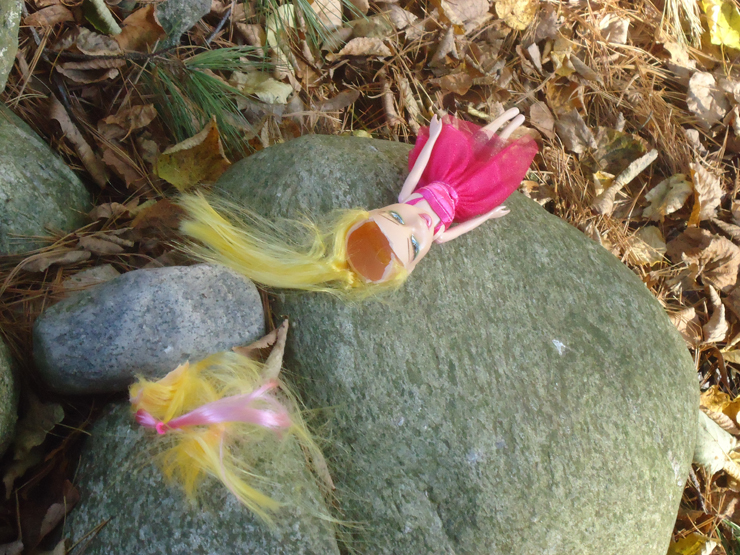 As with his street pieces the General’s unusual approach to this outside environment and his choices of materials can call into question an observers feelings and perceptions of historical events, war history, and their relative meaning. Usually warriors are depicted in public space by grand and substantial sculptures of mountainous scale, adding to the perceived heroism of the actor depicted. General Howe miniaturizes the size and sometimes simplifies the rendering to merge with the memory of a child’s imagination and concomitant exaggerations, where many are encouraged to ‘play’ war. The Street Artist frequently refers to his own childhood and the endless hours of play in nearby woods with his multiple war toys. 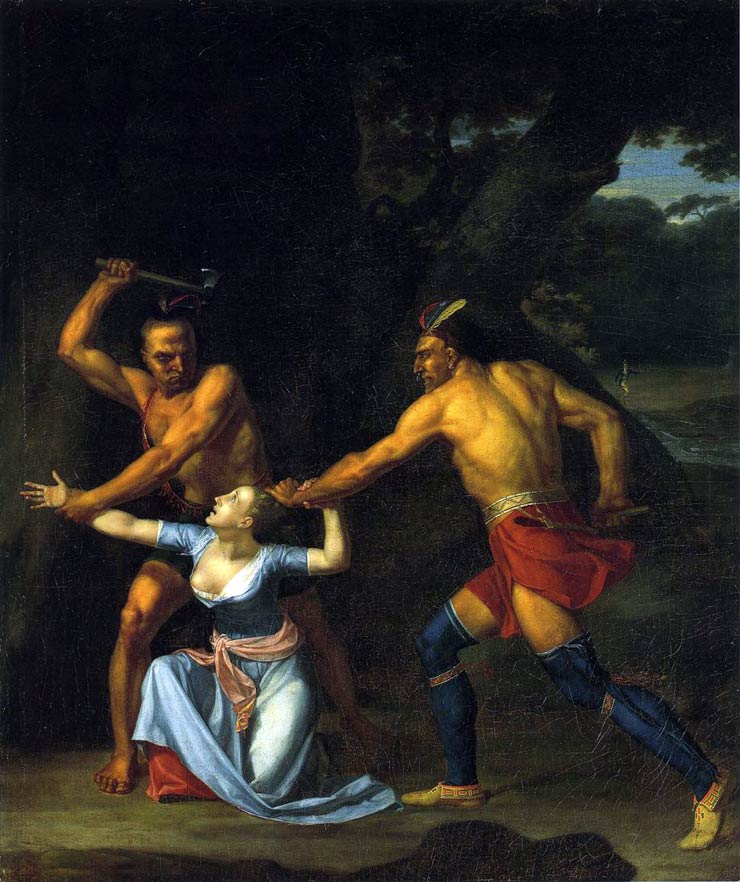 “The Death of Jane McCrea,” oil on canvas, by the American artist John Vanderlyn, 1804. Courtesy of the Wadsworth Atheneum, Hartford, Connecticut.

Below are excerpts from General Howe’s experience and from the project’s statement:

“The Battle of Saratoga occurred in September/October of 1777.  2 battles occurred, the first was a draw and the second was won by the Americans.  The Jane McCrea incident was a Pearl Harbor/9-11 incident of the Revolutionary War.  American media propagated it to increase enlistment into the war.  Though not an explicit point in the project, this incident also illustrates the deceiving treatment of Native Americans by the “white man”, in this case the British.  The terror these Native Americans brought was much scarier then anything we hear about today.

In preparation for the project my research on mercenaries brought me to the company formally known as Blackwater, now Xe Services LLC. According to many news accounts, they were hired by the US Military as contractors to provide various services in Iraq during the war.  One of the main jobs they had was security for important peoples traveling in Iraq.  There are reported incidents where these “security agents” opened fire on innocent people, causing much controversy.  On the flip side there were incidents where members of the organization were caught off guard and were horribly killed.  The multiple incidents eventually led to the Iraq government canceling Blackwater’s contracts to work in Iraq.” ~ General Howe 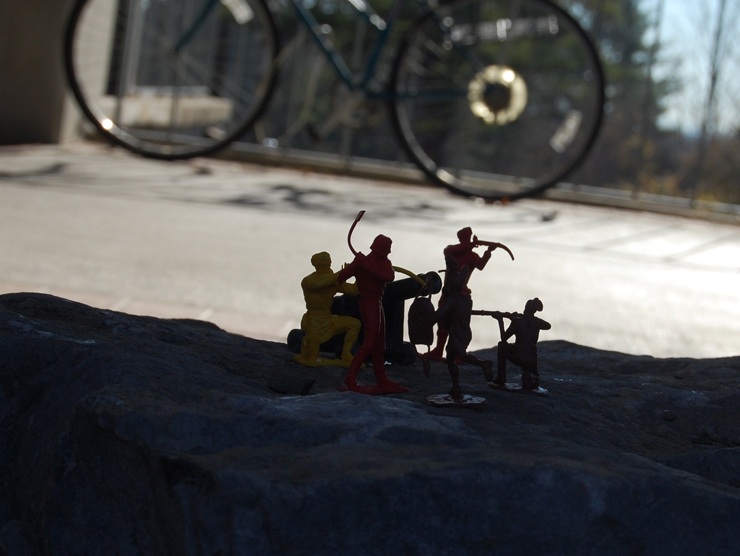 As is customary and expected for General Howe and other historians, parallels are drawn between those events and the wars the US is currently conducting in The Middle East. It’s one thing to pose historical plastic soldiers around to commemorate a long ago event with people who have long been dead, as well as their loved ones, their politicians, religious leaders, and their captains of industry.  This mornings’ free paper that they hand out at the subway entrance contains a special tourism section on Colonial Williamsburg, Va., featuring a misty glowing snowflake inflected photo of “re-enactors” dressed in uniform with “historically accurate” weapons in hand. When depicting war scenes of contemporary times, this art can be much more difficult to encounter, especially if you didn’t pay to get in. Perhaps because of the scale and it’s direct connection to current events, the installations can even inflame a viewers’ passions. 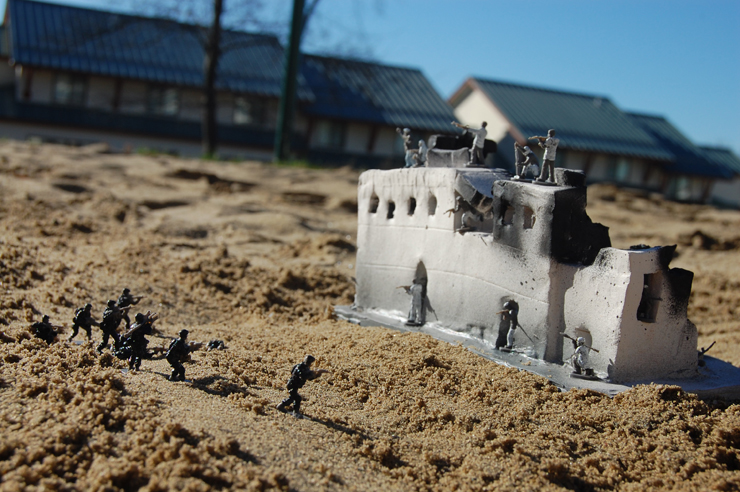 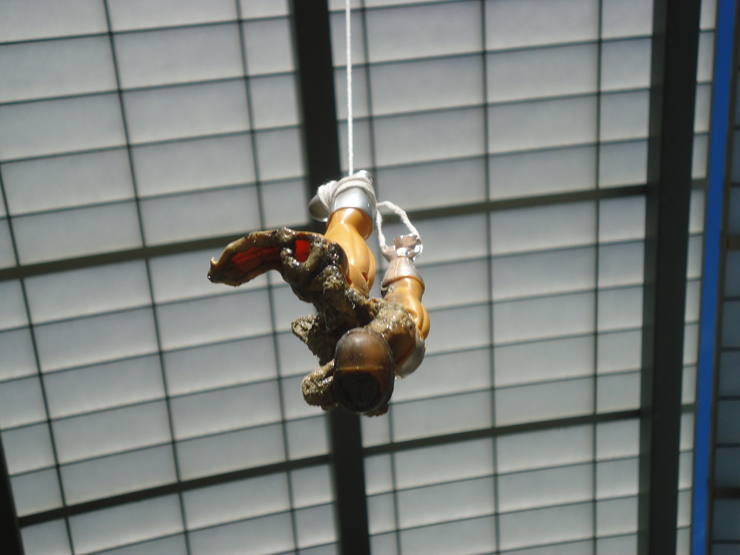 In this piece General Howe refers to news accounts of an event during the Iraq war where military contractors were hung and their bodies were burned publicly. (photo © General Howe) 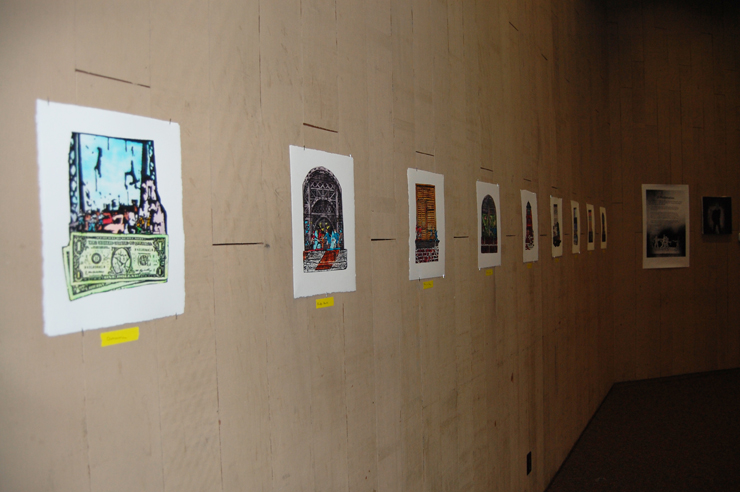 “While I was on this journey I captured images of other interesting things going on at the school, anti-war projects, graffiti, and street art” General Howe 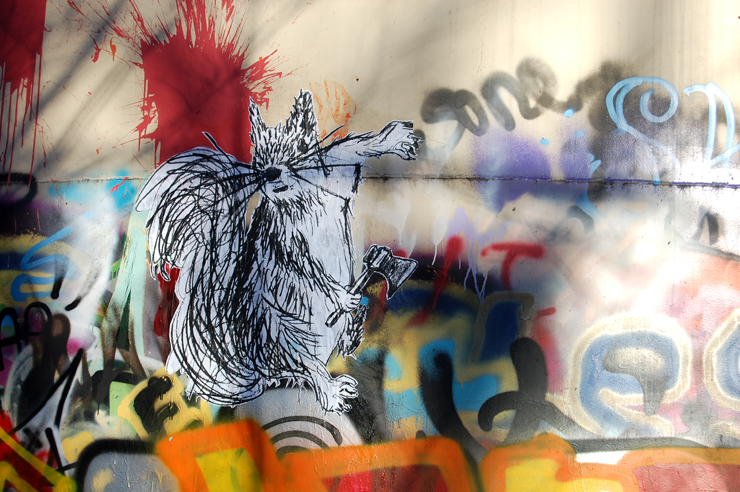 A wheatpaste of a squirrel carrying a tomahawk. (photo © General Howe) 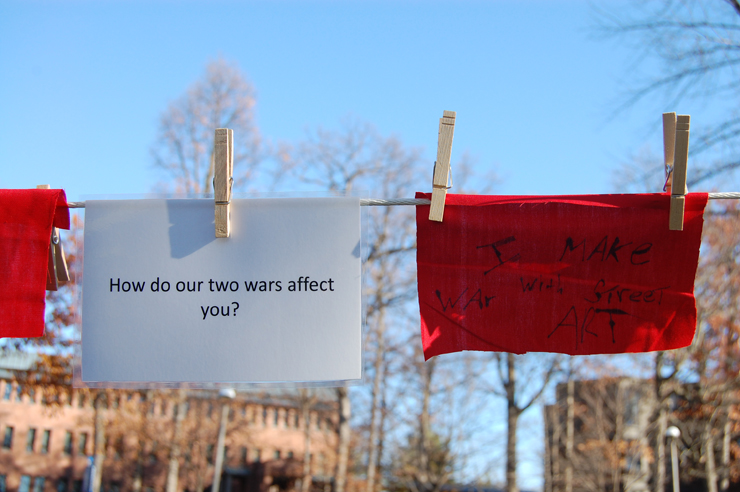 "What will be your legacy?" Asks Erendaj in Penza, Russia
“What will you leave after you? What will be your legacy?” Nikita. What kind of legacy will you leave after you? (photo © Erendaj) For illustrator and muralist Erendaj, that is an open questi...
Tatyana Fazlalizadeh: When the Lion Roars Back, a small overview
We're excited because today we get to spend a few minutes on stage with one of our hometown heroes, the artist Tatyana Fazlalizadeh. Leveraging her artistry with her politics with her desire to suppo...
Seth, Eime and Ernest Zacharevic at Memorie Urbane 2014
A quick look at the current progress for the 2014 version of Memorie Urbane in Italy today with new works by Seth and Eime in Terracina and Ernest Zacharevic in Arce. The festival, which runs April ...
ROA Paints a Memorial Tribute in BK : "Pet Bird RIP"
"I could paint a regular parakeet - something pretty - but that's not me and anyway Peter would f*cking like this!" says Belgian Street Artist ROA as he talks about his newest gift from the natural wo...
Los ALCÁZARES in Murcia, Spain - Murals by the Mediterranean
“Los Alcazares has a population of about 16,000 inhabitants, next to the Mediterranean Sea -in fact it is on the edge of an inland sea called Mar Menor,” says photographer Luis Olive Bulbena of this r...
Battle Of Saratoga 1777 Blackwater Brooklyn Street Art General Howe Jane McCrea Mercenaries new york Saratoga Springs Skidmore College The Middle East