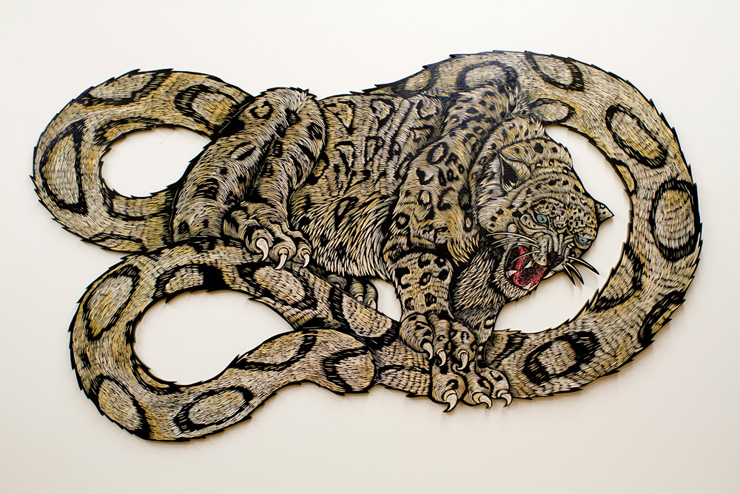 Joshua Liner Gallery, in collaboration with gallery artist Dennis McNett, is thrilled to present a first-ever, spectacular event in the streets of West Chelsea: The Passing of the Wolfbats.

Part art parade, part shaman uprising, the “Passing of the Wolfbats” will gather art enthusiasts and neighborhood residents for a celebratory procession through the heart of the New York art world. The purpose? To wake up the city’s sleeping spirits of creativity, expression, and personal soulfulness.

Led by a Viking ship, drummers, marchers with banners and battleaxes, and a flock of Wolfbats—McNett’s signature symbol of transformation—the procession will feature many elements from the artist’s work, including mythological figures and folklore, animal and skeleton forms, and masks and costumes, all emblazoned with McNett’s distinctive linocut imagery. McNett has evolved these characters into a personal mythology that he deploys in woodcut prints on paper applied to wall installations, sculptures, papier mâché masks, costumes, ships, and more.

The community is enthusiastically invited to participate in the procession in whatever form it chooses, from wheatpasting prints to the hull of the ship, to creating and wearing costumes, to offering expressions in song and dance during the procession. All participants are welcomed to join the celebration of community energy and collective spirit outside the Joshua Liner Gallery on 28th Street, where a second ship (with band aboard) will be moored. The ships themselves are roughly twenty-six feet in length, constructed of wood entirely by hand, and feature ten-foot sails of printed muslin and a hull papered in prints by McNett and myriad other artists.

“The size of the ship is important,” says McNett. “It represents an invasion into whatever space it inhabits and is large enough to be collaborative. It’s an armature for communal ritual, big enough to facilitate everyone’s work.” It is McNett’s intention to celebrate collectivity and collaboration in the construction of the ships, the tradition of storytelling, the energy of the procession, and the egalitarian medium of printmaking itself.

McNett’s Wolfbats—flying creatures with a wolf head and bat wings—are inspired by the Norse resurrection myth of Fenris, and first appeared in public at the 2007 Deitch Projects Art Parade. The artist staged his first “Viking invasion,” with Wolfbats and near life-size Viking ship, at the Southern Graphics Council Conference (“Mark Remarque”) in Philladelphia in March 2010. Dubbed “The Big Takeover,” the parade incorporated work from countless number of printmakers who joined McNett in adorning the Viking ship with their work. In December, Scope Miami will showcase Santa Muerte in a special project installation by McNett at its annual art fair.

Identifying overarching themes in his work, McNett views his mythical characters as “beautiful misfits shunned and punished for being different, alive, strong. They are a reminder of our short time on earth. I envision all of these things as vital spirits that wake the sleeping spirit in others, and do battle against apathy, loss of community/tribe, the sleeping and tuned-out, fictional news media, corporate ownership, and money-beforespirit attitudes.” 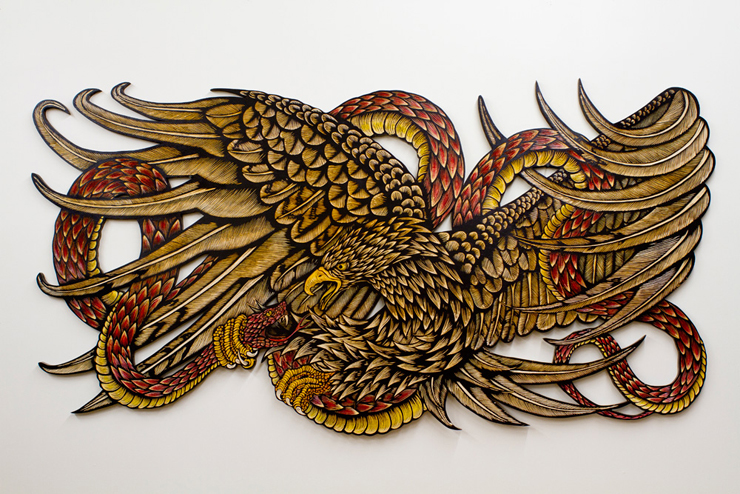 The Exhibition at Joshua Liner Gallery

Dennis McNett’s Viking ship procession kicks off an exhibition of new works by the artist at Joshua Liner Gallery. The show will include wood- and linocut works on paper and muslin, as well as large carved-wood panels that are hand-colored in acrylic, inked, and finished. Also included will be freestanding sculptures papered in McNett’s prints, such as Santa Muerte, more hanging wolfbats, and animals that carry personal and mythological significance for the artist.

Throughout, McNett focuses on storytelling in images expressed by the bold, saturated line unique to relief printmaking. The artist’s vocabulary of images borrows freely from Greek and Norse myths, Mexican muertos, and the animal kingdom, all synthesized into an idiosyncratic style that is deeply heartfelt. Other characters and creatures include eagles, wolves, owls, and skeletons, some of which have been developed into live, impromptu performances in the public sphere.

McNett will also unveil a series of Viking ship sculptures emblazoned with patterns and images from a variety of printing processes. These are memorial sculptures recognizing deceased friends and heroes from the artist’s past. Among the remembered are the late Andy Kessler, New York City skateboard pioneer; Richard Mock, the celebrated painter and linocut printmaker regularly featured by the New York Times; and the master printmaker and Kent State instructor, Tom Little. The ships represent each person with specific patterns, symbols, and imagery either carved into or printed onto the wood surface and sails.

As McNett states, “The body is like a vessel, navigating water and waves. Ships have character: some know how to navigate the seas better than others. Some ships are driven by skilled and experienced captains. Some ships are beaten and weathered. Some have carried many passengers. Some show the way. Some vessels work together for a common goal or to form a stronger force.” The emotional tumult around these themes is faithfully evoked by the memorial ship sculptures and a crashing wave installation in the gallery.

About the Artist Born in 1972 in Virginia Beach, VA, Dennis McNett received a BFA from Old Dominion University in Norfolk, VA, and an MFA from Pratt Institute in Brooklyn, NY. He currently lives and works in Brooklyn. Solo exhibitions of his work include: Year of the Wolfbat, Fecal Face Dot Gallery, San Francisco (2009); and Driving Through, The Life Art Gallery, Portland, OR (2008). His work has been featured in the following selected group exhibitions: Barnstormers, Joshua Liner Gallery, New York (2010); Outlaws and Wild Animals, Rebus Works, Raleigh, NC (2009); From the Streets of Brooklyn, Thinkspace Gallery, Los Angeles (2009); Titanium Exposed, Fecal Face Gallery, San Francisco (2008).

Threatened Species Painted on London Walls for "Endangered 13"
23,250. That’s how many wild species are listed as threatened worldwide by the International Union for Conservation of Nature (IUCN). A newly curated mural project in London aims to begin raising aw...
BSA Film Friday: 06.05.20 / Dispatch From Isolation # 75
Our weekly focus on the moving image and art in the streets. And other oddities. Now screening : 1. BCN Rise & Fall. Documentary History of Street Art in Barcelona BSA Special Feat...
Derek Gores x Moniker x BSA
In advance of Moniker in Brooklyn this May, we are interviewing some of the artists who are influenced both by street practice and fine art as the contemporary urban art category continues to evolve...
MadC: Solemn Codes of Graffiti Transformed from "Street To Canvas"
You hope for it, but nothing is guaranteed. Transitioning from being an artist with a respected, lauded practice of graffiti/street art to a booming professional career on canvas is not a clearly def...
Sisters Sojourn to Kingston to Update the Truth with Jetsonorama
Two new wheat-pasted and hand painted murals by Jetsonorama in New York State’s first capital call to memory the work of the abolitionist and former slave Sojourner Truth, who at one point called King...
Brooklyn Street Art Dennis McNett Joshua Liner Gallery Manhattan NYC