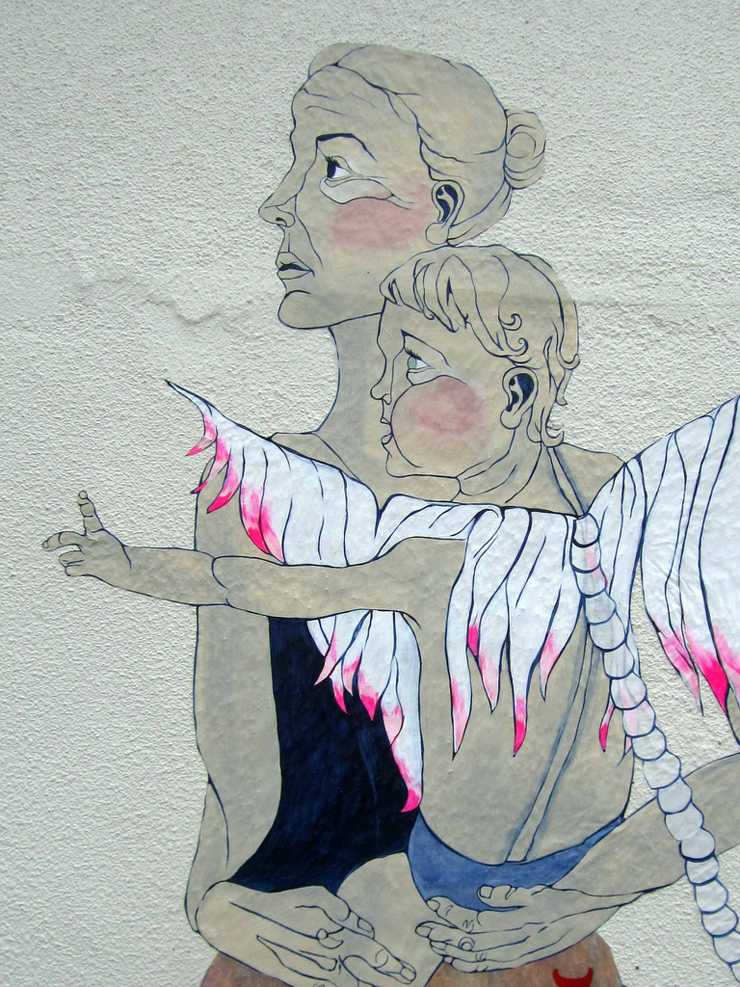 Brewer’s Mansion is happy to present A Collection of Drawings, a show by Brooklyn street artist Cake, from December 11th through the 21st!

I use anatomy to describe the intricate relationship structures humans have with themselves and others. I frequently take from the pool of human suffering for subject matter and inspiration. When people disconnect from themselves in any way, it will somehow show up in their faces, bodies and gestures. I prefer to make drawings describing those results.”

For the show at Brewer’s Mansion, I will be creating an installation for a selection of drawings completed during my month long stay this past fall at The Fountainhead Residency in Miami.”

Brewer’s Mansion is located at 55 Waterbury between Scholes and Meserole in Bushwick, Brooklyn. To get here, take the L to Montrose, walk half a block down Bushwick Ave and make a right on Meserole, then walk down a few blocks and make a left on Waterbury (while you’re here, take a walk along our block to see pieces by Clown Soldier, Fernando Mora, Gaia, Giant Robots UK, Rambo, Samson, Sten + Lex, Y’Elle, and more. New stuff goes on all the time).
We’re open from 1 to 7 on weekends, by chance, for special events, and by appointment (call Megan at 917 679 2339).

HOW & NOSM on the Israeli-Palestinian Separation Wall
After a half hour, soldiers yelled down, asking what they were doing. “We’re from New York, we paint,” they shouted back, and continued spraying. Moments later the gate rolled up to the side and fou...
Laia and "Magic Avenue" in Barcelona for Contorno Urbano
Today we return to community murals for a minute, just to check on the progress of Barcelona based artist Laia. She says she started as a graffiti writer in ’99 at age 14, eventually gaining respect ...
Sr. X Makes an Escape
Spain’s Sr. X has a good knack for placement with his realistic figures incorporated into the streetscape, whether peering out from a broken façade or up from the edges of a pothole. Sr. X "Bye" Lon...
Rylsee Plays With Letters, Show Opens at Urban Spree
“How to Play with Letters” is the new monograph, “Other Inbox” is the show. Both are by RYLSEE, the visual artist from Geneva who now lives in Berlin and has been a member of Urban Spree for five year...
In Your Face With Sekone and Rexenera Fest in Carballo, Galicia
Dude! Turn the can around! SekOne. Detail. Rexenera Festival. Third Edition. Carballo, Spain. (photo © Lluis Olivé Bulbena) Sekone caught our eye in this Spanish Oceanside town of 36,000 recently ...
Brewer's Mansion Brooklyn Brooklyn Street Art Cake NYC