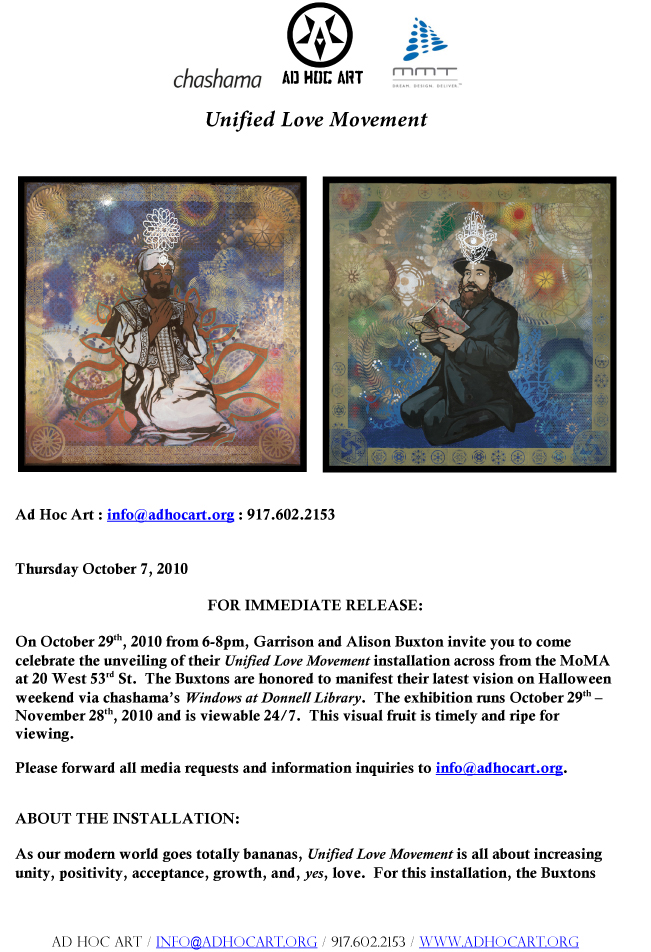 On October 29th, 2010 from 6-8pm, Garrison and Alison Buxton invite you to come celebrate the unveiling of their Unified Love Movement installation across from the MoMA at 20 West 53rd St. The Buxtons are honored to manifest their latest vision on Halloween weekend via chashama’s “Windows at Donnell” program. The exhibition runs October 29th – November 28th, 2010 and is viewable 24/7. This visual fruit is timely and ripe for viewing.
ABOUT THE INSTALLATION:

As our modern world goes totally bananas, Unified Love Movement is all about increasing unity, positivity, acceptance, growth, and, yes, love. For this installation, the Buxtons invited two of NYC’s artistic gems on board to help blow the doors off the outdated religious school bus. Leo Villareal, brilliant blinkity-blink LED maverick, and Scott Draves, creator of the mesmerizing Electric Sheep entities, lend their brilliance to the mix.

Unified Love Movement portrays four figures from four of the world’s faiths – Buddhism, Christianity, Islam, and Judaism. Each is transmitting their love, energy, and prayer to their respective godheads. Though superficial differences do exist, these religions share profound similarities at their cores, including messages of tolerance, sharing, compassion, forgiveness, and infinite love. To depict the infinite openness of the divine without overusing conventional religious references, the Buxtons chose to represent Metatron, the celestial scribe and messenger of the divine, in its sacred geometric form. Emanating from the center of the exhibit, the geometric LED array of Villareal subtly pulses cool white light while Draves’ vivid, bleeding-edge Electric Sheep projections undulate infinitely colored waves over all who choose to engage.

Unified Love Movement is the Buxtons’ foremost project to date, inviting the viewer to participate and contribute to its spiritual expansiveness by realizing the innate commonality of our human experience and then caring enough to do something about it. Perhaps we can then put our minds and hearts together to create a better world.

Garrison and Alison extend a special, huge thank you to chashama and MMT for their very generous support of this project, which would not have happened without them. The contributions of many keep the world lively.
{http://chashama.org / http://mmt.com}

Many thanks and our best to you.

Marilyn as Missy "Works It" in Miami: New Shots from Art Basel 2013
Put My Thang Down Flip It and Reverse It Pete Kirill process shot of his work on Marilyn Monroe / Missy Elliot tribute. (photo © Matt Fox-Tucker) Miami and the just-ended Art Basel 2013 is a holy m...
BSA Images Of The Week: 09.07.14
Here's our weekly interview with the street, this week featuring Crummy Gummy, Dan Witz, Dasic, Dot Dot Dot, Flood, Hama Woods, Jaye Moon, Jerk Face, LMNOPI, Mr. Toll, Ostream, Pobel, QRST, Robe...
Live Stenciling in Berlin with Street Artists for "Cut It Out"
The stencil has been a steady presence on the street since the beginning of graffiti and Street Art. Possibly picked up from commercial or military methods of labeling shipments, machinery, signage, a...
Converting Gold From Our Waste: "Bordalo II / 2011 - 2017"
Bordalo II 2011 - 2017. Editor & Publisher Bordalo II. In conjunction with ATTERO and exhibition by Bordalo II held in Lisbon. November, 2017. Lisbon, Portugal. Are those Ai Weiwei bicycles clu...
Bayonne Diary, From Alban Morlot's Point of View
Here in Basque country you can casually drive between Bilbao (Spain) and Bayonne (France) as if you were just heading out to the shopping mall to buy new kicks. The signs of course are in multiple la...
Ad Hoc Art Alison Buxton Brooklyn Street Art chashama Donnell Library Garrison Buxton Leo Villareal Manhattan MOMA new york NYC Scott Dravers