Exhibition November, 12 to December, 25, 2010 at Galerie Itinerrance
Opening on Friday, November, 12 from 6 pm 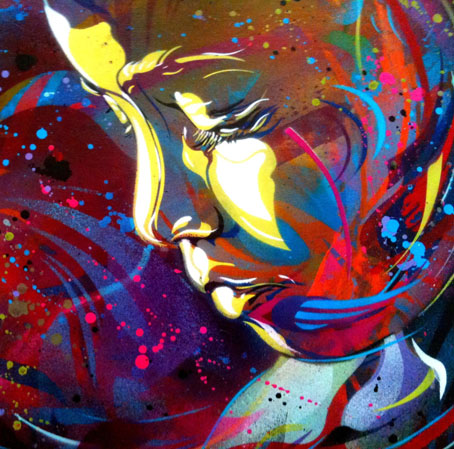 A solo show:
C215 became in a short time an important phenomenon in street art. He is considered by his
peers as one of the most talented artists on the international scene. And his success goes
much further because he also collaborâtes with institutions such as the council of Vitry-sur-
Seine, his town, which supports him into his vision of the street. The stencils of C215, so
numerous in the streets of the world, of Vitry and Paris, are very trendy to a large audience.
Through a stunning technique, C215 realizes portraits and scenes with very intricated
stencils in a fine attention to the details. His extensive researches in the field of coulours
during this past year, brings now a new dimension to his work more and more powerful.

Today, this exhibition is an opportunity for C215 to return to the evolution of his
studio work and his reflections on the urban environment. These two dimensions
will be then highlighted on the two floors of the Gallery Itinerrance. 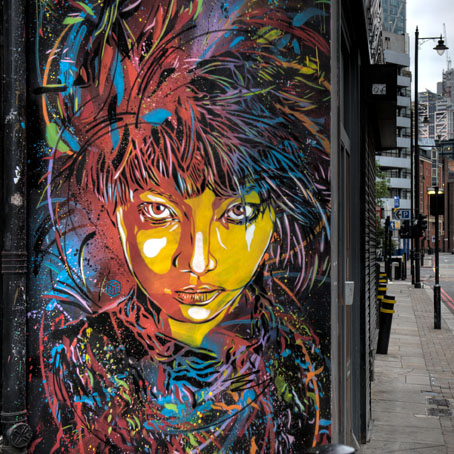 In October 2009, Critères Editions published a book in a little collection that became a real
success. After a few thousands of sold copies, they are prepared a more complete
monography in another collection named Urbanité.

The Community Service book gathers the testimonies of a dozen photographers in Europe
and the United States, as Romanywg (GBR), Luna Park (U.S.), Lois Stavsky (U.S.), Jaime Rojo (US) or Jessica
Stewart (IT).

A review : thousands of stencils painted on the walls of cities worldwide.

A tribute : in text and pictures, to the dedication and commitment of this street artist.

A thought:
Christian Guémy, also as doctor of art history, continues the discussion of Daniel Buren on
the link between the concept of public art and the in situ, with a new approach toward the
movement of street art, like the concept of placement or interaction with the environment.

He develops that further when  he doesn’t hide his face neither his name, during day and
oftenly without authoriszation.

“When you paint on trains, public buildings or blank walls, I understand the desire to protect his identity, but this
is not my situation […] I try to paint what is beautiful and accomplished, which can be understood and
appreciated by all. ”

Interview given to Samantha Longhi for Graffiti Art Magazine # 8, October 2009

Galerie Itinerrance, specialized in street art is located in the 13th arrondissement since
2004. Close to the Bibliothèque Nationale and the Frigos, it is part of a growing urban
economy and culture. With its concrete walls and 6 meters high, exhibitions combining
traditional display & wallpaintings are not to be missed. Gallery Itinerrance is positioned in
the field of street and stencil art in particular revealing the work of artists internationally
settled but unvealed in France.
Galerie Itenerrance
Représented artists :
BTOY (SP) / C215 (FR) / JANA & JS (FR) / ORTICANOODLES (IT) / STEN & LEX (IT) /
LOGAN HICKS (US)
Head office
Medhi Ben Cheikh
00 33 6 19 98 06 33
mehdi@itinerrance.fr

BSA Film Friday: 06.25.21
Our weekly focus on the moving image and art in the streets. And other oddities. Now screening:1. Guido Van Helten - L'attesa - (The Wait) - 20172. "Spaciba" INO in Athens, Greece.3. TrueSchoo...
SWOON: The Sanctuary Rises to Its Highest Mission in Braddock, PA
“I’ve faltered, but I haven’t given up,” says Calendonia Curry AKA Swoon. “I believe in it and I hope you do too.” She is speaking about the much ballyhooed Braddock, Pennsylvania church which she...
"Martha Cooper" Solo Exhibition Reveals Many Unseen "Action Shots"
An intrepid photographer who has launched a million dreams (and perhaps a few thousand careers) in graffiti and Street Art with her photography that captured crucial and seminal aspects of our culture...
BSA Images Of The Week: 12.02.18
Sliding into the chaos this week with great new stuff that hits on pop, poetry, technology. The madness of New York sometimes fuels the message on the street; other times it feels like NYC is merel...
US Election Day 2020, Trump v. Biden, and Politics on the Street
Street art in the last five years has been lit on fire with politically themed illustrations, installations, slogans, opinions, and insights that implore passersby to take action and to be engaged in...
Brooklyn Street Art C215 Criteres France Galerie Itinerrance Paris Samantha Longhi