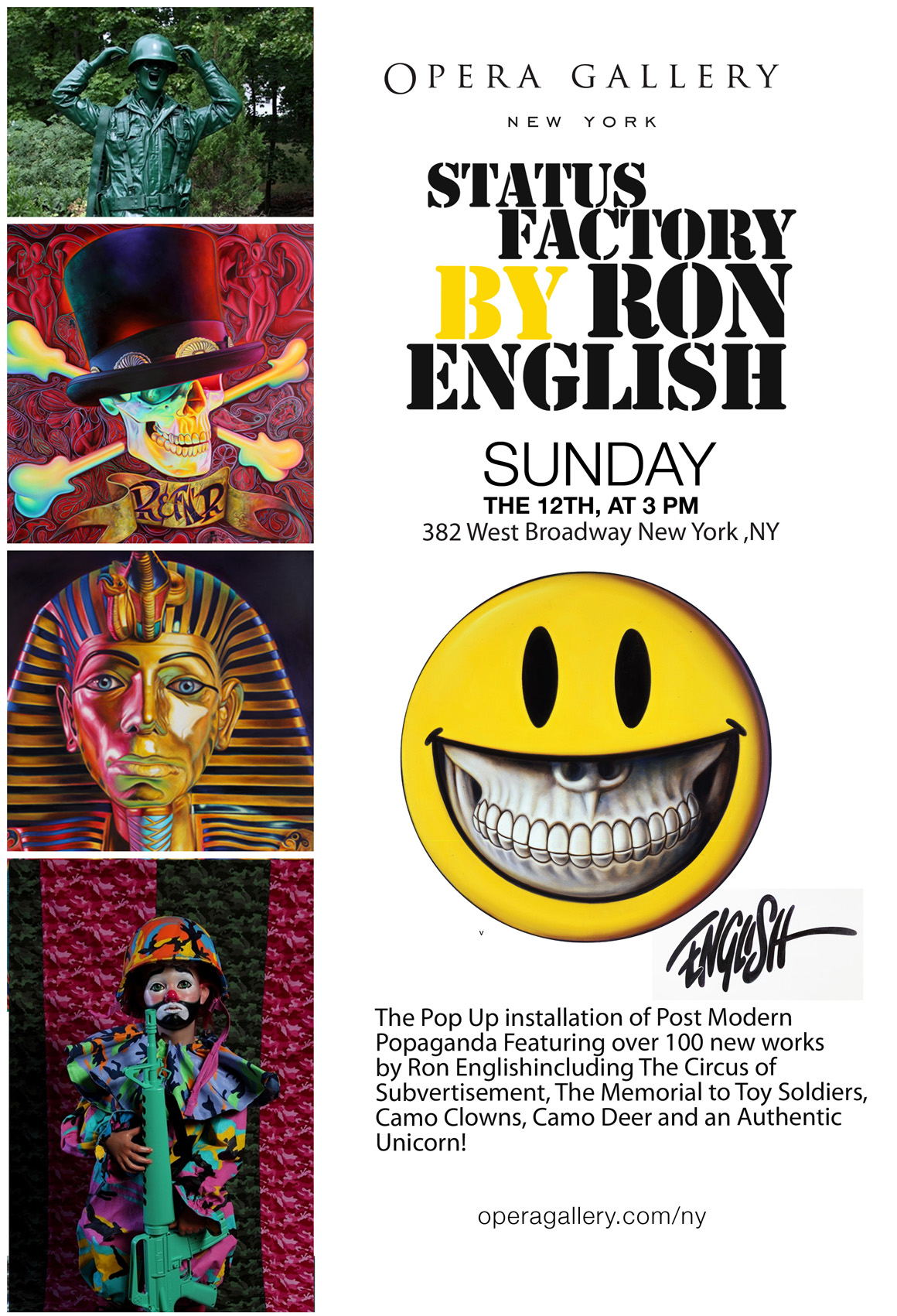 Ron English and Opera Gallery present “Status Factory,” a surreal assemblage of the artist’s most well-known character motifs alive in their natural habitat, a camo-arcadian warholian times square circus sideshow mash-up barely contained by the silver walls of 382 West Broadway. English draws the curtain back to reveal the process and inspiration behind his most outrageous work, with sculpture, installation and street art shown for the first time in context beside a new body of monumental masterworks. This highly interactive exhibition traces the arc of English’s most ambitious themes across mediums like a cartoon colored tightrope: dangerous and fun.

One of the most prolific and recognizable artists alive today, Ron English has bombed the global landscape with unforgettable images, on the street, in museums, in movies, books, television, and album covers. English coined the term POPaganda to describe his signature mash-up of high and low cultural touchstones, from superhero mythology to totems of art history, populated with his vast and constantly growing arsenal of original characters, including MC Supersized, the obese fast-food mascot featured in the hit movie “Supersize Me,” and Abraham Obama, the explosive fusion of America’s 16th and 44th Presidents. Ron English’s art, whether in paintings, billboards, murals, or sculpture, blends stunning visuals with the bitingly humorous undertones of America’s Premier Pop Iconoclast.

Born in Dallas, Texas in 1966, Ron English paints, infiltrates, reinvents and satirizes modern culture and its mainstream visual iconography on canvas, in song, and directly onto hundreds of pirated billboards. English exists spiritually somewhere between a cartoon Abbie Hoffman and a grown-up, real-life Bart Simpson, delivering a steady stream of customized imagery laden with strong sociopolitical undertones, adolescent boy humor, subversive media savvy, and Dali-meets-Disney technique. Dedicated to finding the sublime in the everyday and breaking the momentum of the didactic approach to art and life, English offers up an alternative universe where nothing is sacred, everything is subverted, and there is always room for a little good-natured fun.

"Surface" Brings 6 New Murals to Copenhagen
New images of epic murals in Copenhagen today from Conor Harrington (UK), ROA (Belgium), Borondo (Spain), DALeast (China), Maya Hayuk (US) and HuskMitNavn (DK) on the occasion of the release of ...
Holiday Window Shows : A Floating City of The Future at Barneys
New York is one of the few pedestrian cities that has an active street culture almost everywhere you walk and the tradition of the revered holiday window display is one that endures even though many p...
BSA Film Friday 08.17.18
1. El Mac goes to US/Mexico border to paint “Abuelita of Presidio” 2. "Extrapolate" by Johan Rijpma 3. Francesco Pinzon and Sofia Castellanos in Mexico City
BSA Film Friday 11.01.2019
f Our weekly focus on the moving image and art in the streets. And other oddities. Now screening : 1. Paradox and CPT. OLF and Daredevilry in Berlin2. The Tunnels. Nuart Festival 2019. A film ...
Illustrator PERRINE HONORÉ Simply Cheerful on Torrassa in Barcelona
As you know the influence of the Memphis design movement is again fully present as the spirit of the 1980s Milanese architect and designer Ettore Sottass has captured the imagination of many young cre...
Brooklyn Street Art new york NYC Ron English.Opera Gallery