Andrew Hosner at Thinkspace Gallery could have gotten a little nervous when he saw pics of the new 3-dimensional back skirt that Imminent Disaster was making in Brooklyn for the show that opens tomorrow in L.A.

In fact, even Miss D. wasn’t sure how she was going to ship it when we saw her making it in the studio.

But, new pictures reveal that the cut-paper sculpture made it and today’s progress looks like the show will open tomorrow night with no hitches or stitches.

Armsrock and Imminent D. have been taking over the gallery with their theme of refuge, referring to the millions of people on earth who are pushed from their homes by political persecution or war or environmental disaster. 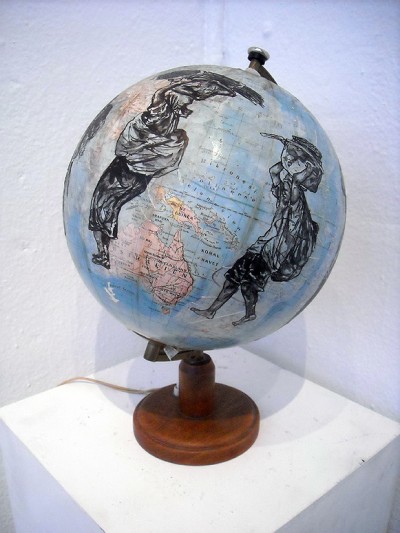 One of Armsrocks’ pieces is also a sculpture of sorts; “Weight of the World”, Ink & graphite on paper affixed to a globe. (image courtesy ThinkSpace)

Looking at some of the first images, one cannot help think of the temporary housing that we have seen set up for victims of recent earthquakes. 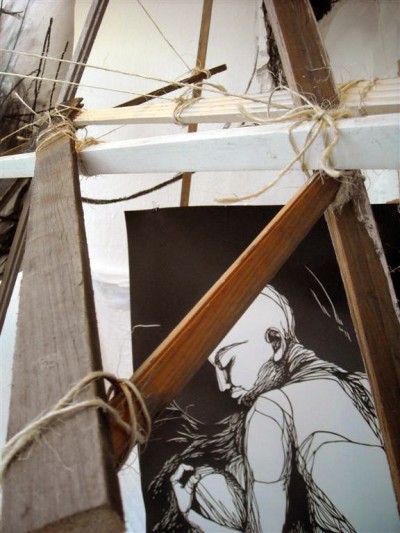 Of the transformation of the gallery, Hosner says, “Man, they are going to town. The space looks epic.” 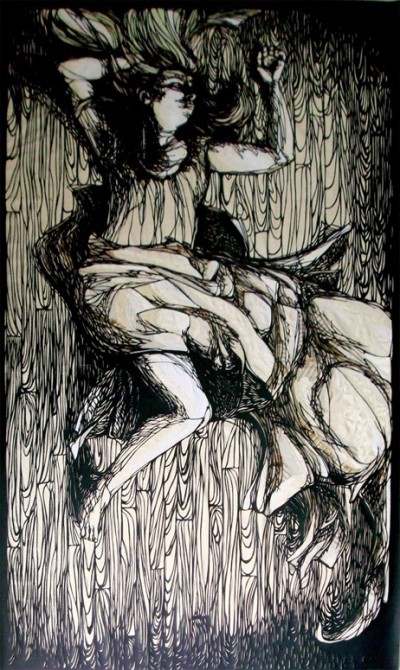 Thur-Sun 1-6PM or by appointment

C.Damage & the Bear Dude on the Brooklyn Block
You've seen him, sometimes in a vest and tie, sometimes with polkadot pajamas, a fireman's uniform, or a formal tuxedo; The bear dude is on stickers all over the place. At first C.Damage was pretty q...
Sneaking a Peek at Imminent Disaster and Gaia at Ad Hoc
Okay Street Art fans! It's a winning artist combination that you look forward to, and that Ad Hoc is getting nearly famous for - a new show featuring two of the strongest allegorical voices in street ...
Martha Cooper's Influence: Inspiration, Imitation, and Flattery
For the silly folks who consider themselves ordained to be critics, the prodigious street art scene in New York just bubbles with possibilities. One of the favorite criticisms of a street artists’ pi...
Week in Images 11.29.09
Our Weekly Interview with the Street Voy!  Delivery!  (Specter) (photo Jaime Rojo) Specter (detail) (photo Jaime Rojo) Somewhere between drawing the drapes and playi...
Oil pastels and drawing together: Chris Stain and Armsrock (2nd installment of 3 interview posts)
Chris Stain talks about the variety of techniques he's using, including a relatively new one he borrowed from Armsrock, "Yeah,  basically, the gallery told us that in order for me to use spray ...
Andrew Hosner Armsrock Imminent Disaster thinkspace gallery