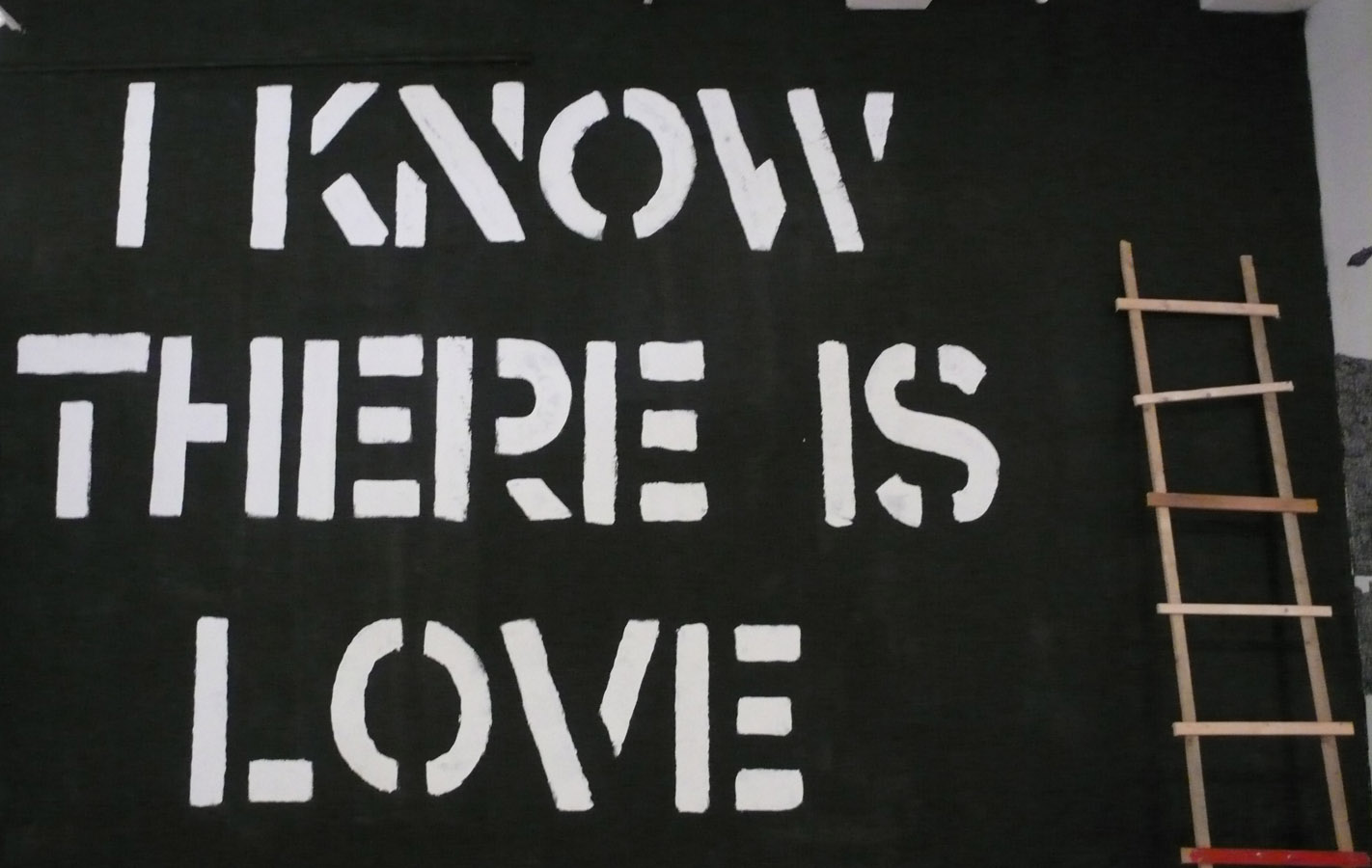 The back wall is done. If you want to see the lyrics to the entire song, Heather has written them in a very neat hand on the reception desk. (photo Jaime Rojo)

The crying, the screaming, the knashing of teeth

– the gates of inquisitorial mayhem have opened into the gallery here where in just mere days you will see the fearful state of the fatally flawed race called human.

But Mr. Stain says the progress of the installation at Ad Hoc’s last big shindig is going swimmingly:

“I feel really good about it. I think it all just came together very naturally.  Armsrock and I have worked together in the past and that was kind of a pre-cursor for what’s happening right now.  We’re familiar with each others’ work, each others’ style. We have similar themes.  We work in different mediums but I think it’s all come together based on the friendship we’ve already established.”

Armsrock heralds the way they employed in the planning stages of the show:

“I’m feeling very very good about the progress. Chris said something interesting the other day. We were standing and looking at the show… only halfway finished. He’s a very dry man, and he has a very dry way of saying things. And he was like, “I knew it was going to look like this”.  Somehow I think that he was right because I knew how the process working with him would be and it was a project that I took on for ‘the process’. ”

Flying Into the Weekend : HotTea, Bordalo II, TelmoMiel, Nespoon for No Limit / Borås: Dispatch 6
HotTea is being offered in the Caroli Church yard right now, floating above parishioners heads. Hot Tea. No Limit/Borås 2017. Borås, Sweden 09-2017 (photo © Jaime Rojo) Unveiled as the sun was set...
BSA HOT LIST : Books For Your Gift List from 2015
This year BSA brought you a number of reviews of Street Art related books to consider. Now that it is Christmas / Hannukah / Kwaanza / Solstice / New Year time we thought you would like a brief rev...
BSA Images Of The Week: 02.21.16
Happy Sunday! Evidently Donald Trump is the Anti-Christ! Full disclosure, we already sort of suspected this because he is also anti-immigrant, anti-Mexican, anti-woman, anti-humility and so many o...
Salty New Character Appears On BK Streets
Birds, bees, flowers, fat caps. Warmer weather equals more new art on the streets - including new artists whose work you don't recognize. Also we know its spring because the email box is getting dail...
A Land of Mirrors for Pener: Bartek Świątecki Paints Hometown in Poland
25 years in the game, Pener routinely lets his mind travel to encompass possibilities, then channels them abstractly through a series of echoing geometric forms with aerosol and brush. Here in his ho...
Ad Hoc Gallery Armsrock Chris Stain Jaime Rojo