ANTHONY LISTER
How to Catch a Time Traveler 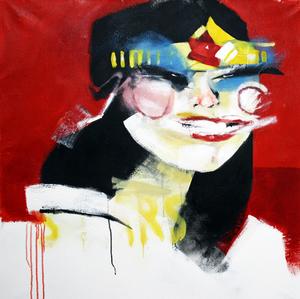 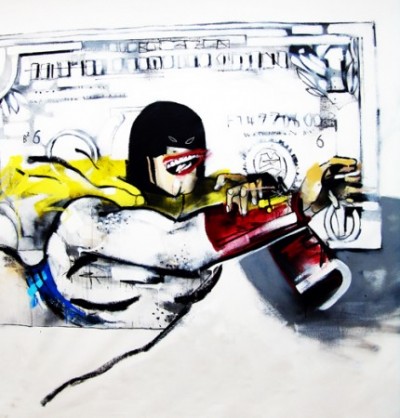 Known in the Low Brow movement for his intriguing, playful hybrid of street art,expressionism, and cubism; Lister’s new body of work shows the tongue-in-cheek frivolity of his earlier pieces developing (or decaying) into a more mature and disturbing direction. The deformities and un-done aesthetic resolve of Lister’s work provides viewers with a concretization of contemporary societies’ psyche – or, as the artist himself states, “making the obvious more, well, obvious”. In his latest series, Lister continues his examination of pop culture and how a generation raised on American television processes and interprets the symbols and imagery of their youth. The result is gender bending cartoon characters, and superheroes such as Wonder Woman and Bat Girl, that uncover the unconscious sexual desires and repressed taboos embedded in these seemingly innocuous popular icons. The work contains a circular perspective, one that shifts between, even confuses the non-rational inner workings of the child and adult mind. Yet this inescapable paradox of the human condition, wherein we are at all times evolving from and dependant upon the experiences of youth, is unlocked by Lister’s painterly antics, and revealed to be the utterly serious and impossibly ridiculous condition it is. Lister’s practice is indeed about reality. A reality his work does not claim to resolve, but rather to question, loudly.

BSA Images Of The Week: 03.25.18
Sharp tongued and defiant, that's the way we like our young people, and Gen Z has a lot of loud mouthed articulate and savvy ones who are not going to be fooled out of gun control, if yesterdays...
BSA Images Of The Week: 05.10.15
Today we celebrate Mother's Day in the USA and Mexico and about 70 other countries. Cheers and thank you to all the mothers of the world. If only we would stop paying lip service to the foundat...
BSA HOT LIST : Books For Your Gift List from 2015
This year BSA brought you a number of reviews of Street Art related books to consider. Now that it is Christmas / Hannukah / Kwaanza / Solstice / New Year time we thought you would like a brief rev...
BSA Images Of The Week: 11.04.18
Welcome to BSA Images of the Week! The clocks fell back last night, which means it gave NYC marathon runners a much needed extra hour to lie in bed and stare at the ceiling thinking about the ra...
Year in Images 2008
Paradigm Shifting and Cave Writings Looking back at the powerful changes in '08, it's not hard to see their reflection on the Brooklyn streets, which may serve as tea leaves revealing the messages sw...
Anthony Lister Lyons Wier Gallery