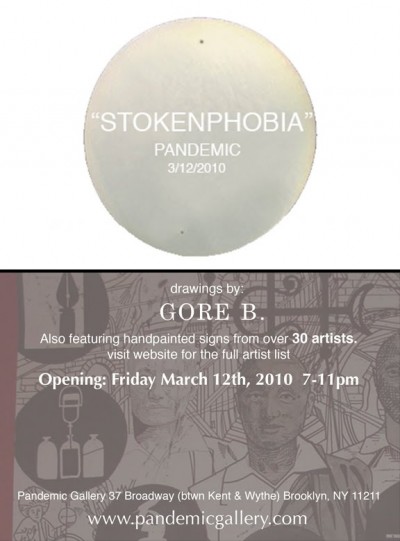 Please join us for the opening of our newest exhibition, “Stokenphobia”. Featuring drawings from Gore B and hand painted signs from over 30 artists. We will be having an opening reception Friday, March 12 from 7-11pm.

Gore B has long been an integral part in the street art scene coast to coast, from hand painted signs bolted around New York City, to crisp roller letters hidden around Santa Cruz.  His work, painted either on canvas or scrawled across the walls of bridge underpasses depicts characters of regional importance and cultural significance.

“Stokenphobia” or the fear of circles and round objects is a fear we have decided to confront head on by displaying the work of many urban artists hailing from New York, Philadelphia, and California on large round metal road signs. If  this  circular display becomes too overwhelming for those afflicted by the phobia they need only to turn around and will find over 60 small rectangular signs painted by the same motley crew of unconventional art misfits. Pandemic is giving those afflicted with Stokenphobia a  chance to confront this debilitating fear.

Hope you all can make it!

BSA Images Of The Week: 10.22.17
Absent worries that the banks and oligarchs are poised to crash our economy into the ground and that the privatized profiteering war machine wants Trump to start WWIII its been a fantastic and s...
Character Witness
Sometimes it is a talisman who is having adventures on the behalf of an artist, a part of him/herself who stays behind and watches the area. At other times it is a character seen through a mirror,...
GIFFITTI and the Eye Popping Animations of Ryan Seslow
You think that maybe the animated GIF is the equivalent of graffiti on the digital wall? Artist Ryan Seslow has been experimenting for a little while with that hyper eye-blitzing looping tag called t...
BSA Images Of The Week: A Collection Of PRIDE
In honor of the 50th Anniversary of the Stonewall Inn uprising in the West Village in Manhattan, we are giving the spotlight this Sunday to the many artworks that have been created by dozens of a...
BSA Images Of The Week: 10.23.22
Welcome to BSA Images of the Week! Here's our weekly interview with the street, this week featuring: Chris RWK, De Grupo, Eternal Possessions, J131, ToastOro, Dapo Da Vinci, Mai Gai, SRF, ANS...
2Esae Armer Becki Fuller Bloke Buildmore Cahbasm Celso Chris Campisi Chris RWK Dana Woulfe Darkcloud Deuce7 DickChicken Droid Egg Yolk Enamel Kingdom Faro Infinity Jordan Seiler Keely LA2 Luna Park Matt Bixby Matt Siren Moody Morgan Thomas Nate Hall Paper Monster Plasma Slugs Royce Bannon Sadue Shai Dahan Skewville Ski Stikman Swampy Veng RWK Wrona