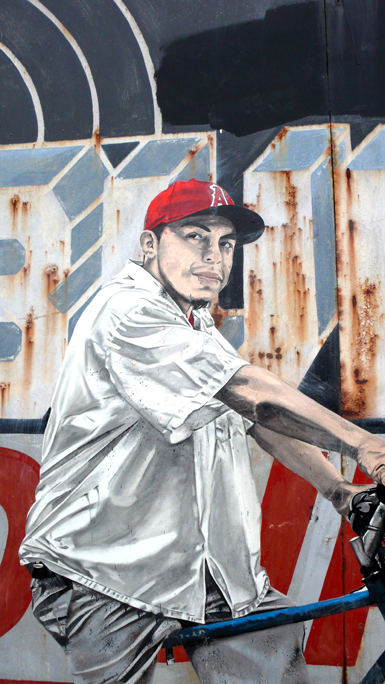 It’s great to find a Specter portrait on the street because he doesn’t waste your time.  His people are people you know, and they are usually looking right at you. You get it.

Recognition is instant, along with clarity.  Specter’s realistic portrayal cuts right to the chase. A street guy with a shopping cart loaded with bottles, a food delivery guy on his bike, or a grizzled proud dude wrapped in a red blanket.  I’m here.

You’re looking at a very large hand-drawn and painted piece with great detail. It’s also one of a kind and has been in Specter’s studio and mind for a few weeks, maybe months, if he’s completed it in sections.

Each piece is the result of interviewing the subject, shooting a photo of them, and living with their image, thinking about the conversation and what he got out of it. Without preaching, the piece draws attention to the human, and the human condition.

Firing up “The Beast” to keep us warm.

On a freezing cold bitter day recently, BSA hung out with Specter in an unheated studio… well until he blasted us with this rocket-launcher sized heater.  After that I was pretty toasty, maybe even burnt on the edges.

When a person on the street he has met becomes a subject for art, Specter thinks it is important to at least get to know them a little.  He just asks general questions, nothing too personal, to try to get an idea where they are coming from. Understandably, not everyone wants to talk, let alone answer questions.  If they have a cart of scrap metal or bottles, for example, they may think Specter is trying to find out their source.

“Also, I’m trying to portray them as human beings. How could I do that if I’m just crossing the street and snapping a picture? The way that I do it –  I’m trying to make it a personal thing,” he says.

Brooklyn Street Art: People seem to stand and stare at your work, more than other people’s work perhaps. Have you ever stood there with them?
Specter: Yeah sometimes, I usually go check out my pieces when I first do them, then I kind of disappear. I guess I usually catch people on the first few days, which is probably the best time because the pieces are really new.

I like to shoot it with people a bit, I always try to see what they have to say. Somehow, luckily, it’s always been positive, and that’s just luck.  I love getting the feedback because in neighborhoods in Bed Stuy and other parts of Brooklyn like that where they are not used to having art they seem so appreciative…   people are always so interested.

Brooklyn Street Art: Well isn’t that kind of refreshing compared to the observations you hear from the  ‘art crowd’?
Specter: Yeah, very refreshing because they are looking at it as a gift, instead of looking at it analytically.  They’re like, “Okay, somebody just dropped off this gift here”. They always have questions about the piece too – not like art people who are like, “Why did you chose this and what does it mean?” – it’s more like “Why does this guy have a flower?”  And I say “I don’t know, why do you think?” And they have a definite opinion, and suggestions about how it could be better.  They have all this input.  I love it.

The finished piece takes on dimension and meaning. This old sign for a business long gone becomes a new context for a street guy.  (© Jaime Rojo)

Brooklyn Street Art:  So for you it’s a gallery of the streets…
Specter: In a way, but it’s this anonymous art, which makes it more fun.  I don’t like getting patted on the back too much. I’ve always been confident of my work and proud of the effort I put in but I’m not really sitting around waiting for compliments.  I almost kind of embarrassed to get compliments. I kind of prefer street art (for that reason). I’m a little embarrassed by taking credit because it’s not so much about me. It’s more about the piece and the people enjoying it, the public enjoying it.

“It always sound stupid to say but I’m just the channel, I’m not the actual creator.  I just don’t want to give myself too much credit because a lot of these ideas are already out there. I’m just putting them together.  It’s more really about the piece and how it’s making its way into the environment, and people enjoying it.  That’s why I don’t sign my work”

Specter’s first installment of his new “Readymade” series, which he creates by whitewashing a facade, and masking rectangular shapes that become de facto finished pieces. After he signs them of course. (photo © Jaime Rojo)

Brooklyn Street Art:  So can you describe a “Readymade”? It’s like you are drawing attention to something that is already there, asking people to make some kind of judgment on it, where they would have just walked by it before.
Specter: It’s really influenced by (Marcel) Duchamp, and his “readymades” obviously and his initial concept was to set up to take things that already exist and put them in artistic context.  The way that street art is turning the streets more into a space where work can be discussed and interpreted  as a gallery – I wanted to take that same angle.   Also I wanted to take on the “muralization” – which is more of the public art aspect.

Brooklyn Street Art: You mentioned Duchamp. Who else is a touchstone for you?
Specter: Definitely REVS is my all-time favorite.

Brooklyn Street Art: Why?
Specter: Because he is like the king in New York. He was like the first guy to take something like a wheat-paste and say, “This isn’t some p*ssy sh*t, this is another way to get up and this is as hardcore as anything”  He just basically opened up the game. And that is kind of the way I approach it too.  For me it’s not about a medium, it’s about how is the best way to get this up.

I never used the wheat paste until I started showing with Fauxreel and I was like “Wait a second I could use these as an installation. They don’t have to be a picture, they can be installed in a space and create an environment”.

I was doing a lot of 3-D work and I was itching to get back into drawing and painting so it was a way to bridge the gap because painting directly on the wall takes so long.  It’s just not plausible in those kind of spaces.

Specter also ventured into some sculpture of his own this fall, with this gold plated tribute to recycling, mounted on a podium, and suitable for going on your mantelpiece, if you have an absolutely mammoth-sized fireplace. (photo © Jaime Rojo)

Brooklyn Street Art: So we’ve got REVS as an influence, but that is about technique in getting up and possibility, but it’s not about who inspires you as an artist.
Specter: I mean his work inspires me too. He is a beautiful sculptor.  I enjoy that as well.  A lot of street artists I do appreciate, especially artists like BLU – I love what they are doing, that animation stuff. David Ellis is another artist who is very inspiring. I saw his sound sculpture (at Anonymous Gallery’s booth in Miami), it was out of control, just a beautiful piece. Obviously I love the business sense of a Jeff Koons, that idea of how someone can be so powerful and is really honing it in.  Also he is playing with people.

Brooklyn Street Art: Where is the connection to the graffiti tradition in your work?
Specter: Well, that’s how I started. I basically taught myself how to draw, how to paint through graffiti so I guess the “tradition” is the way I approach the piece.  I’m kind of just doing it of my own accord.

Brooklyn Street Art: You don’t go after people’s property, people’s homes…
Specter: No I don’t go after people’s homes, or their trucks. I mean, I guess when you’ve been doing this so long you kind of get a bit of conscience about it, I guess.  It’s also that I’m more interested in how the piece relates to a space.  So the abandoned properties fit more into what I’m trying to say.

The way the art is transformed is through these spaces.   How I started honing in my graffiti skills where people were starting to recognize me as an artist, I was going to these abandoned spaces and using them as galleries, like canvasses.  So in that respect I’m kind of still working in the same thing.

Brooklyn Street Art: What were you writing when you were doing graff?
Specter: I was “Specter”, that’s why I kept it.  The reason why the name stuck with me so long basically is because I was kind of the guy who would get up a lot, but no one would really know where I was.  With the art work I always found a way to pull stuff off so people were like “How did he do that?”.

Specter’s original photograph for a portrait for the “Manage Work Flow” series, named so as an ironic twist to the language of corporations and their economists; using the same term to reveals it’s underlying inhumanity.  (photo © Jaime Rojo)

Brooklyn Street Art: There is something devious about your whole approach.
Specter: Yeah of course. I try to be nice.  The way I look at life is you put in what you get back.  I’m very much into that, but I am kind of hidden and devious.

Brooklyn Street Art: You do tend to go to areas that are not typical.
Specter: Yeah I do. That’s the whole idea, that’s where the whole “Specter” thing came in, it’s kind of like a ghost,  a spirit that is kind of floating through and drops off these artworks.

The finished piece on the street (photo © Jaime Rojo)

Specter has some work in a show next month at MoCADA in Brooklyn.

The show’s name is “The Gentrification of Brooklyn: The Pink Elephant Speaks.”

There are also some rumors of a show this year at Brooklynite Gallery, but nothing’s been locked down yet.

A straw hat for the summer, should it ever come back (photo © Jaime Rojo)

BSA Images Of The Week: 07.02.17
4th of July weekend here in New York so we are headed to a barbecue and a frisbee game. Maybe to the Jersey shore for some sun. Happy 4th ya'll! Looks like the country needs to take itself back ...
"Shoe" is His Middle Name: New Book by Niels Shoe Meulman
“They both see words as images,” says Shoe about graffiti writers and Medieval scribes in a 2013 interview with the BBC. His latest tome extrapolates this reverence for the letterform, an obsessive re...
SpiderTag, Nails, and Abstract Geometry in Madrid (VIDEO)
Madrid-based Street Artist Spidertag is one of the new crop of young artists using yarn in their work; a genuine departure from aerosol and wheatpaste that once was an anomaly is now widespread enough...
Art In Odd Places 2022: Story. Open Call For Proposals
We've been supporting the work of the New York organization Art In Odd Places (AiOP) for years and are always intrigued and inspired by their productions and the artists they select to offer their pr...
Kurt Boone Shares the Jersey City Mural Festival in Print
Almost a year ago, the Jersey City Mural Festival 2021 was launched. We covered it extensively for you here, here, here, and here on BSA. Poet, urban author, photographer, and longtime NYC messeng...