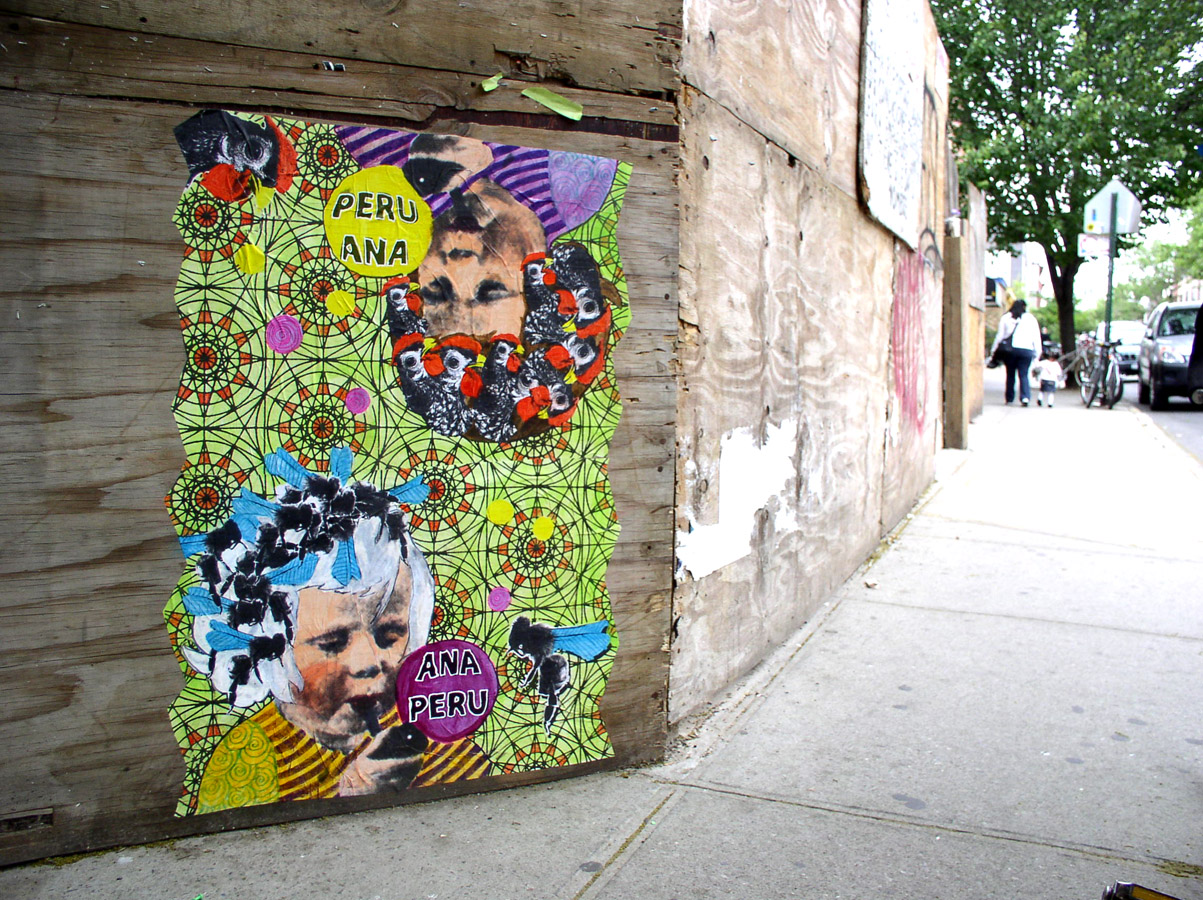 “…And Then We Jumped into the Abyss of Numbers: Memories in Absurdity From the Bowels of Peru Ana Ana Peru” opening October 17 at Brooklynite Gallery

In fact, with their fantastical approach they are telling us what we already know; the logic of the street is illogical, so why begin to explain it. To embrace the swirling and jagged movement, color, texture, smell, sound, and architecture of the street is to embrace chaos theory. You can tell that Peru Ana Ana Peru find it invigorating.

While graffiti culture has become somewhat codified in many respects, the rules of street art are being written before our eyes. Art theorists, facing ever-increasing irrelevance and impotence, find explanations being flushed out into the ocean as they clutch institutional inner-tubes to stay afloat. Street Art, or any name we finally settle on, is not going to be that easy to explain for a while.

While a public gallery curated by chaos is unsettling to many, Peru Ana Ana Peru have jumped into the abyss and brought riotous color and an ever twisting fantasy narrative that makes sense to – them?

Embracing the “traditional” wheat pasting is only one option, and while it may be the most pragmatic, don’t be surprised if they move their multi-media paintings, drawings, sculptures and video installations into the public sphere more in the future. And they will not be alone, if nascent trends in projection art (and technology), installation art, performance art, and flash mobs are an indication. Individuals are simply taking their voice to the street and claiming public space more than before.

Maybe the only irony in this first solo show by Peru Ana Ana Peru at Brooklynite Gallery opening is that it is located in a formalized gallery at all.  Bringing the abyss inside 4 walls, a ceiling, and a floor feels limiting.  But maybe that’s just my need to define Peru Ana Ana Peru and their work. Obviously the energy and vitality that steams out and around the colorful collection suggest that the idea of venue is no concern  to PAAP’s adventurous minds.  The calliope plays merrily on.

Brooklyn Street Art: Do your street pieces express fantasy or reality?
Peru Ana Ana Peru: We are heavily drawn to the fantastic in our work, be it in street art, or even film to a certain extent. Perhaps this is an extension of our beginnings in the avant garde film/video scene more than anything else, but it’s something that seems to have stuck with us. More than that though, we find ourselves repeatedly drawn toward things of a more whimsical nature in our work, things that might express a ‘joy of life’ aspect of things, rather than a heavy handed ‘real life’ aesthetic. In addition to this, we are shamelessly addicted to color, and lots of it, so perhaps this lends itself rather nicely to the realm of fantasy

Brooklyn Street Art: What is the importance of cinema in your work?
Peru Ana Ana Peru: We consider ourselves to be primarily filmmakers/video artists first, and artists/street artists after that. It is the medium that we are most comfortable in, and in which we feel we have the most to offer. In this sense, cinema is our most important undertaking, and we are most happy when we are working on our films.

Brooklyn Street Art: If Peru Ana Ana Peru had only one medium to express itself in, would it be painting, drawing, sculpture, or video?
Peru Ana Ana Peru: It would most likely be film/video, but with the exception that inside the video we’d use paintings and drawings and sculpture and what not.

…And Then We Jumped into the Abyss of Numbers: Peru Ana Ana Peru even made a promotional video for their first solo show (above)

Brooklyn Street Art: How would you characterize the experience of mounting your first solo show?
Peru Ana Ana Peru: Dizzying.

Brooklyn Street Art: Do the streets of New York have a particular personality that you speak to?
Peru Ana Ana Peru: It feels like New York has different personalities that speak differently to everyone. And quite frankly, it wasn’t really until after our foray into the street art/graffiti world that we realized where we fit in to the whole scheme of things. It would seem that graff/street artists can be lumped into a category of people that, when it comes down to it, just want to be noticed, just want to be seen, by anyone really. And from this point, it would seem that New York’s personality is one of indifference, like a rude bartender in a busy bar, and that by trying to put your name out everywhere, you’re really just saying, ‘hey, bartender, get me a beer.’

Brooklyn Street Art: What messages would you hope the viewer will walk away with after seeing the work at Brooklynite?
Peru Ana Ana Peru: That we are just getting started.

Year in Images 2008
Paradigm Shifting and Cave Writings Looking back at the powerful changes in '08, it's not hard to see their reflection on the Brooklyn streets, which may serve as tea leaves revealing the messages sw...
SPECTER: Inside the Studio
It’s great to find a Specter portrait on the street because he doesn’t waste your time.  His people are people you know, and they are usually looking right at you. You get it. Recognition is ...
Miss Bugs and Joe Black at Brooklynite Tonite
They're calling it "2 Many Artists", as if there were such a thing. While the Queen is back home poking tentatively at her new iPod wheelie, Miss Bugs and Joe Black crossed the ocean to come here and...
"The Great OutDoors" with Luna Park at ArtBreak Gallery
A true street art Opening in Brooklyn, with shutters open wide and many doorways to contemplate. A collection of 30 artists on the street art scene are contributing to the vision of the adoorable L...
From White Box to Tool Box: CrestFest 2010 and Crest Art Festival
Local Family Business Showcases Artists Of All Stripes You won’t find a more excited community-minded, artist-loving dude than Joe Franquinha, who is the second generation owner of a hardware store i...
Bomb Squad Brooklynite Gallery Peru Ana Ana Peru