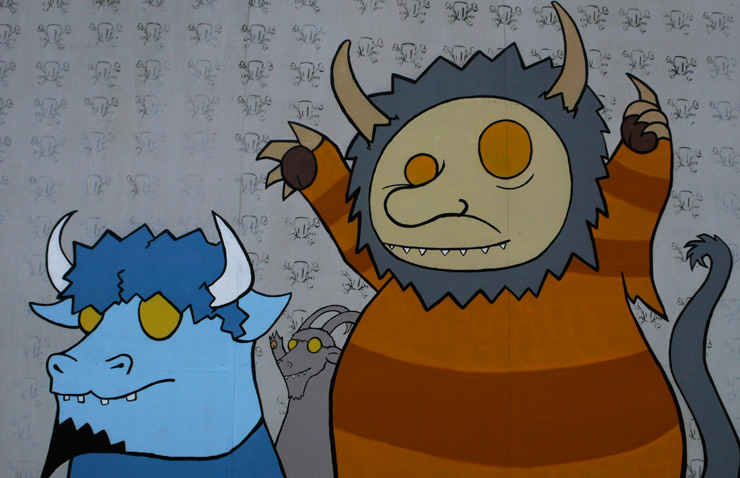 Where are the Wild Things in Brooklyn? Just hang out on the sidewalk.

Just spend a day and a half on the sidewalk painting a big mural and you’ll be met by a barrage of noise – audio and visual – that is a constant state of cacophony and turbulence, and a host of human insight.

A shouting shirtless homeless guy, daredevil teenage skateboarders, gawking tourists with cameras perched aloft, brutish bikers and wirey bicyclists, skinny hipsters, and fast-talking sassy girls sashaying down the sidewalk….  A grizzled sculptor with five-day growth, bent musicians with big black burdens on their backs, real estate developers in wire-rims and pinstripes, monster trucks and sleeveless toughs hanging out the window, and of course “The Empenada” man dragging his blue and white cooler on a luggage carrier yelling, “Empenada! Two dollar! Empenada!”; these are some of the wild things we saw hanging out with these gents for two days. And we loved every minute of it. 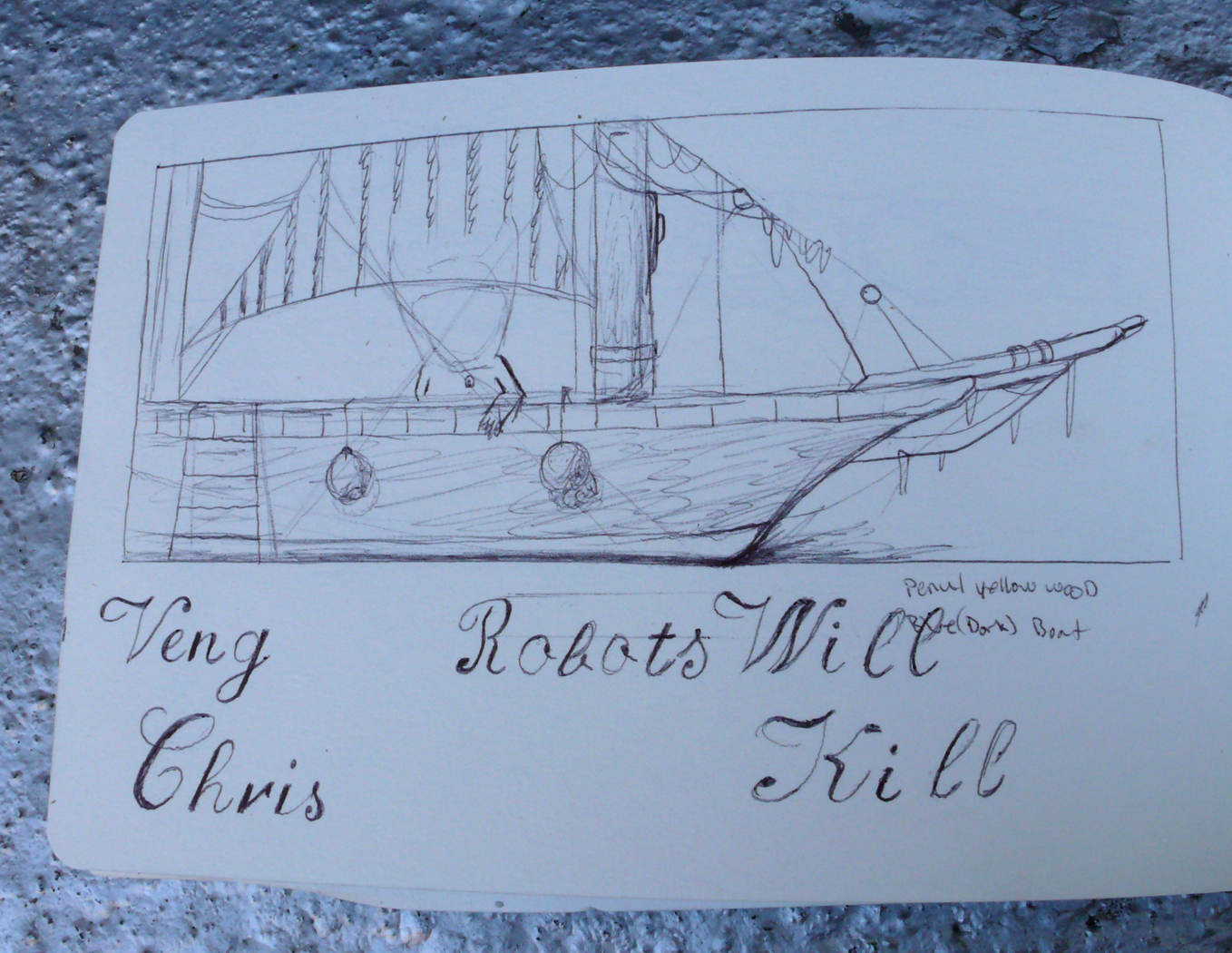 Veng and Chris worked two days (18 hours) this week to complete the brand new piece in which they pay tribute to the children’s book “Where the Wild Things Are”, by Maurice Sendak, published in 1963. It’s a concept they have wanted to paint for a while and their selected scene is a composite of both their painting styles and a few of the scenes in the book. Together they bring the viewer in touch with the power of imagination.

In the original story, the main protagonist, Max, is banished to his room by his mom for acting out around the house and basically being a little punk. While hanging out in his room he begins to imagine a slew of monsters and a jungle and eventually he escapes into a place where he has power over everything and everyone and becomes the King of All Wild Things. Veng and Chris have depicted many characters of their own on the street in the last few years and decided to create some new ones to play the roles here. Veng’s photo-realistic boy looks at peace afloat in this parti-colored boat as he sails toward a cluster of big comic-book bright monsters. Inspired by the whimsical nature of playtime for kids and the untamed imagination that kids have, RWK let their own imagination run wild. 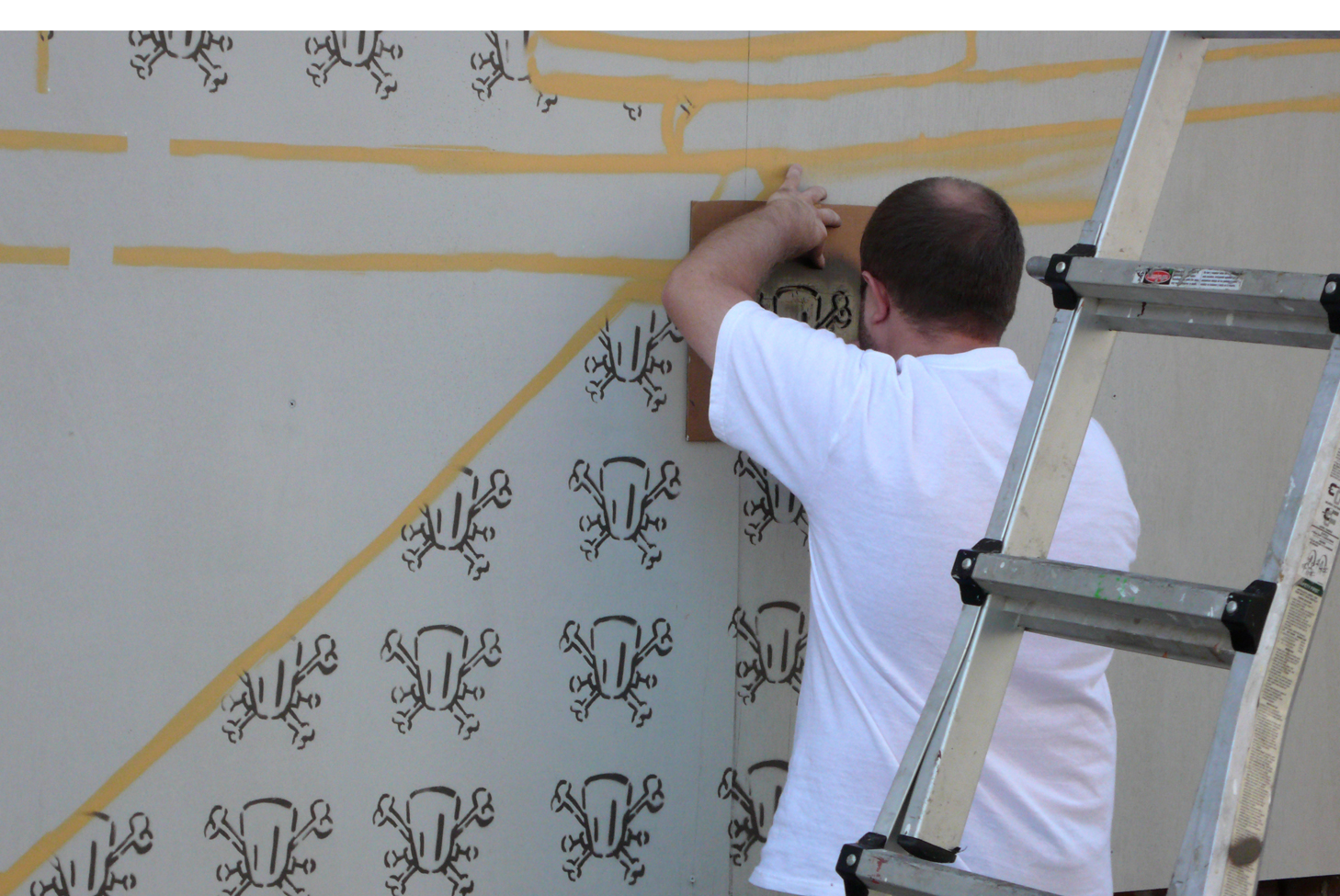 To create the scene based on Max’s bedroom, where the story begins, they stenciled a wallpaper with their Robots Will Kill logo and washed it out to give it an aged appearance. The Max character, re-created by Veng, is in a boat sailing to an island.

He created the boat to have no grounded plane to give the impression of a dreamlike fantasy. To symbolize the island Chris sprays a clump of expectant monsters, clamoring for Max’s attention as he sails toward them, maybe waving, maybe trying to scare him away. The color palette in background the is soft with many neutrals to evoke a nostalgic feeling, while the boat and characters pop out to meet you.

A little history of Chris and Veng
Chris’s mind is flooded with the imagery and ideas that come from comic books, music, movies, and television from the 1980’s, when he was a kid. His mental journal of these images is a haven for escape, and an inspiration for him to draw from. – Robots are big, but lately he’s been making monsters, and monstrous people.

Chris also set in motion RobotsWillKill.com in 2001 as an arts site dedicated to community and exposure for artists/media often disregarded by the mainstream art world. The site opens it’s robot arms to other artists in the graff and street art scene to show work. Robots Will Kill is a collective of Chris, Veng and Kev/Psyn. Their overseas members are ECB (Germany), Peeta (Italy), Flying Fortress (Germany) and JesseRobot (Belgium).

Originally from Staten Island, Veng joined Robots Will Kill four years ago. Originally in the graff scene, he evolved his character series beginning about a year ago, attempting to morph his individual characters to become an ironic statement that blurs the line between fantasy from reality. Heavily influenced by the Flemish masters of the 15th century, he captures the figurative emotions of the era, reworked with wit. Veng’s characters warp time and presents an alternate history to encourage the viewer to immerse themselves in a story.

While the guys were on ladders painting “Where the Wild Robots Are”, BSA asked them some questions;

Brooklyn Street Art: So how is your progress on the piece so far?
Veng: So far so good. Just got finished with the sail and now it’s the portrait. And I have to finish with the cat outfit that he’s wearing.

Brooklyn Street Art: I thought he had a wolf outfit.
Veng: Not in this one. In this one it’s a cat outfit.

Brooklyn Street Art: (to Veng) Did your parents read this book to you?
Veng: I remember lookin at it, I don’t remember them reading it to me. But we had it. I’m sure they did read it to me.

Stepping back a bit, the execution is underway (Photo Jaime Rojo)

Brooklyn Street Art: Have you seen many wild things on the street in the last day?
Veng: Yeah some guy that would not stop talking to us. Lucky for me I had my headphones on and I avoided the whole four hour conversation. But other than that it’s actually been nice. It’s a different pace than painting in Bushwick which is actually more rough – Less people walking around, more industrial. This is kind of more residential and friendly. A lot of people have been inquisitive about what is going on. So far, no negative feedback.

Brooklyn Street Art: Plus there have been a few skirts that have walked by.
Veng: Yes! And the neighborhood definitely has it’s advantages as far as females go.

Brooklyn Street Art: Well you’ve done your share of murals on the street. So which neighborhood has more monsters?
Chris: More monsters? That’s a tough question because a lot of monsters are in disguise so you can’t really tell who’s who. But every neighborhood has it’s pluses and minuses.

Brooklyn Street Art: Do you want to describe your style of collaboration with each other?
Chris: Usually we come up with an idea and we brainstorm it until the night before we have to do it. As we talk more, more ideas begin to come together. We think a lot alike so it works well.

Brooklyn Street Art: (To Chris) Did your parents read this book to you?
Chris: When I was a kid it was my favorite story. I remember seeing the book in the bookstore and then I remember getting it. And then I remember watching it on PBS when I was a kid and being so enamored with the whole idea of the imagination and going to this other world. So throughout my life I have probably had at least 10 copies of this book.

Brooklyn Street Art: Really?
Chris: Yeah, whether it was because I gave one to someone because they never had it or because my one got beat up and I got one that was in better condition or a hard cover one and usually if any of my friends have a kid I usually get it for them for their birthday?

Brooklyn Street Art: Why is it so important to you?
Chris: I don’t know.. I think it’s the idea of the imagination. I think it’s just the idea of the kid dressing up in the costume and not being happy with what he’s doing every day and he wants to find a different place. That’s pretty much how I feel. I go to work every single day and I don’t want to be there, but you gotta. But doing something like drawing or something to keep your mind a little distracted, it’s almost like living the book again.

One of Chris’s original sketches with his robot guy in the catsuit (photo Steven P. Harrington)

Brooklyn Street Art: So in a way you are going to that other place right now.
Chris: Yeah exactly I got out of work today do I could really visit my imagination.

Brooklyn Street Art: What do you think when you realize that your work here could actually spark the imagination of someone walking by?
Chris: That’s amazing. I think that is one of the best things about art – is inspiring somebody to think something, to do something, just kick-start something. That’s one of the reasons we started the website, so people could see art from people all over the world and be inspired to create their own. It’s simple. We just want to inspire somebody to use their imagination.

Are we ready yet? (photo Jaime Rojo)

Brooklyn Street Art: There are going to be a lot of kids walking by this too:
Chris: Yeah, that is definitely going to be cool. And just hearing kids recognize this when they walk by, our interpretation of the story, is cool.

Veng and Chris after a happy day at work. (photo Jaime Rojo)

See Robots Will Kill do their thing at the MBP Urban Arts Festival in Bushwick Brooklyn October 3rd! Brooklyn Street Art is the official blog for this event so come out and see live painting, BMX Skateboard tricks, and live music all day. Support the artists you love.

THE BSA PRESENTATION “ON THE RADAR” IS MOVED TO SUNDAY AUGUST 23RD
Hello Friend! Just to let you know the BSA EVENT DATE at Coney Island Museum has changed to AUGUST 23RD THE BSA PRESENTATION “ON THE RADAR” IS MOVED TO SUNDAY AUGUST 23RD Many exciting new deve...
BSA Images Of The Week: 09.07.14
Here's our weekly interview with the street, this week featuring Crummy Gummy, Dan Witz, Dasic, Dot Dot Dot, Flood, Hama Woods, Jaye Moon, Jerk Face, LMNOPI, Mr. Toll, Ostream, Pobel, QRST, Robe...
BSA Images Of The Week: 05.08.16
Cities are urgently playing the deliberate gentrification/beautification card by bringing in the murals to give the place a facelift: Richmond just finished their third, Chicago is gearing up fo...
MP5 in Italy : Stressed Out Magpies and Carrot-Chasing Rabbits
A big spoon full of sugar – that’s what keeps the sweetness in the appearance of these two public art bus stop pieces from MP5 in Italy. Once assessed, you may see the bitter critique of modern norms ...
M-City is Airborne with Szczecin Wars in Poland
“Szczecin before the Second World War was a German city,” says the street artist named M-City. Now it's flying as a spaceship in his latest stencil mural here – in Poland. M-City. "Szczecin Wars"....