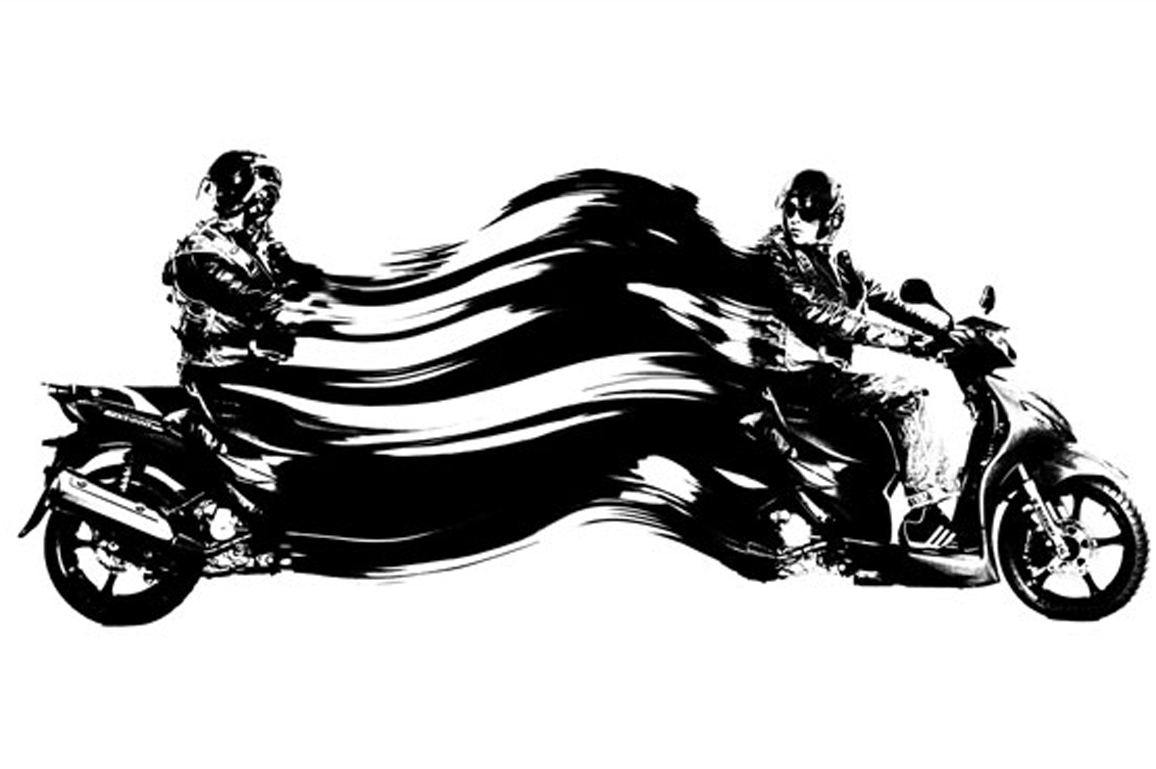 One on One with WK

People are fascinated and even in love with “Street Art” now, and that fact has certainly not escaped WK Interact. The brutal traffic and the construction noise common in New York in the summer is raging as we sit at a café looking across Houston Street at a huge colorful mural being painted by OS Gemeos, the Brazillian twin brothers.  WK gestures to the cluster of fans standing on the sidewalk taking pictures of the guys painting, some asking them for autographs,

“10 years ago, 15 years ago, absolutely nobody would pay attention.  You would see people driving by and they would stop and say, ‘Hey can you do the same thing on my garage?’ or something like that.  People did not care. They would look and say, ‘Did people pay you for that?’  Now you have like 200 people going to that wall specifically to see it.  So it’s a big phenomenon, it’s a really, really big phenomenon.”

Brooklyn Street Art: What do you think of the growth of Street Art over the last few years – born in graffiti but it no longer feels like it’s related to graffiti, and the number of people who are involved…

WK Interact: Maybe 15 years ago most of the people described what we do as “graffiti” because that was it.  I never really called myself a graffiti artist. I used to call myself an “urban street artist”.  I didn’t even feel like the stuff I was putting on the street was art.  It was not art. It was a situation.  I always said “If you want to make art, you can go to your place and stretch a canvas and you paint”.  To me the street is not about creating art, it is creating a language.  That’s why I don’t like to make murals, or put a frame around it.  I like it to be incorporated. The point of my work is not what I do but how I conceptualize my work.

Brooklyn Street Art: What do you think of New York people?

WK Interact: It’s the regular type of people that I think are very interesting.  It could be a carpenter, it could be an electrician, could be a kid six years old, it could be an old man … I don’t really value people for what they own, I value people for the way they are standing. I don’t expect everybody is going to be rich or intelligent or smart or creative.  I think every individual has something. …That is one of the reasons that I live in New York – it is such a mixed population.

WK Interact: For me putting something up on the wall is the same as someone planting that tree right there, and letting it grow.  It is more like urban vegetation for me.  We have to call it art because it’s aesthetic.  But for me it is not theater, it is more like a three dimensional urban situation.

Brooklyn Street Art: Can you talk about the feeling of “action” more?

WK Interact: I like also to create, especially on the streets, to create a film, an action.  It’s totally not about the party that created the piece, it’s not about the size, it’s not about the color – it’s about the effect and the affect.  It’s not about the beauty of how many colors you have, or something you have to stand and pay attention to.  It’s a “SNAP” like that (claps his hands together fast). And you basically are sucking up all this energy in half a second, and you don’t even know it… you connect with viewing something and seeing something. And for me the street is like this. I don’t see it like a mural, like an art, like a thing of beauty.

“At that moment, the person passing becomes part of the piece.” (image WK Interact)

Brooklyn Street Art: So the “action” is what is happening to the person…

WK Interact: I like to work on a human scale. I want people to incorporate into it.  When someone passes in front of my work, another person on the other side of the street sees them passing in front of it and sees my piece in the background.  At that moment, the person passing becomes part of the piece.  The one who is across the street actually sees the effect of it.

I don’t think people really see this in my work.  They just see a simple black and white image.  I really don’t talk that deep or detailed about my work, and if you do not explain this to people they just don’t know.

Brooklyn Street Art: You are very methodical in planning and execution

WK Interact: Yes, and then I criticize my stuff. And the next year go back over my stuff.  It’s kind of crazy too when you took so much work and so much effort to do it. I am interested in challenging myself to do better.

Brooklyn Street Art: How do you balance that desire to make more money and be better known and still not feel like you have “sold out” to, say, the corporate world.  How do you find that balance?

WK Interact: I have been lucky to have not sold myself to some really big companies, because some people have come to see me and offer me things. It’s very difficult. I fight it a lot of the time. Even the few projects I did with brands, people were like “Oh, you sold yourself.” And they really put me down.

In an example of the conversations that happen with street art, someone placed a blue cross over this piece because they may have though WK was glorifying war.  In fact, this soldier was part of a series he created to give a message to bring all the soldiers home from Iraq. (WK Interact) (photo Jaime Rojo)

Brooklyn Street Art: Did you receive reassurance or encouragement from your parents?

WK Interact: My parents, who are both artists, did not believe in my work. It took them 10 years to believe in what I was doing. They were totally rejecting what I was trying to do, and they basically told me ‘you’re never going to make it’.

It’s funny you said that because I kept all of the press from 10 years I had collected about my work and I wrapped it in newspaper and one Christmas I took it home and put this huge pile on the table. I said to my parents, “This is your present, for both of you”.  They thought at first they were just some magazines in English, until I showed them the articles. They were shocked.  I didn’t really want them to tell me “It’s great,” I just wanted to prove to them that they were wrong.  On that day, in that minute when I did this I changed the way they used to view me.  They were shocked and they said, “How come you never told us?”

I was proving something to myself, and proving also that they were wrong.  And I was trying to believe in myself.  It’s this motivation that is what is inside me, what has made me.  It is probably one of the best qualities that I have, instead of wanting to be rich or famous or anything like that.  This is probably what makes me keep wanting to put things on the street now.

Brooklyn Street Art: Can you now assume the parent role and offer a young street artist who is not feeling confident in themselves or their work?  Can you give encouragement to that person?

WK Interact: I’ve been giving encouragement for almost my entire life.  I used to help other students in school. I had an “Open-Door” policy at my gallery on the Lower East Side for five years.  So many people used to come to my place with their book, or they left messages on my machine, and every time, it didn’t matter if it was a good day or a bad day I had to pay attention, and I had to be there, and be open to people.  Meaning, what I did for all these years, instead of doing what they did to me, I did the exact opposite.  I felt like “you cannot stop talent”.  If you see somebody coming in your door, he has taken the time to come and ask you questions and is very open-minded and presenting his work – and you push him away, you create an angry young artist who will never forget that.  So you have to be careful.

Brooklyn Street Art: So you are saying that you took this opportunity to heal yourself of the pain of rejection by doing just the opposite.

WK Interact: Yes, I mean, if I had realized that I was doing that, I would not have chosen to do it at the street level.  I mean it is good, but at the same time, I should have maybe worked out with it at a school as a teacher.  When it comes to working with people and taking photos, or you put me with animals or kids; I do very well.  I feel connected.  As a teacher, I probably would be a good teacher.  And it would have been less stress.

Brooklyn Street Art: Is it your responsibility to help young artists?

WK Interact: This is also one of the reasons why when I see somebody who’s got talent, it doesn’t really matter what it is, the person doesn’t really need to be painting, just talent, and he can believe in himself, I almost want to lift this person up.

When someone who is in a position to help says, “It’s not my fault, it’s somebody else’s”, I don’t believe it.  I say this is your decision.  If someone has come to you and told you something then you have a choice to help or not.  It’s important because sometimes you just have to do one thing to destroy all the dreams of these people.  It is very fast.

“It is very important to interact.” – WK Interact

Anna Naduda's Floating Island of Scrap Metal, Plastic Bottles in Kiev
"I used a scrap metal for the carcass and I have built a floating-island from plastic bottles,” says sculptor Anna Naduda about her new piece for the Kyiv (Kiev) based Mural Social Club. Anna Nadud...
Swoon Gives Us All a Tour of "Seven Contemplations" at Albright Knox
It’s a pity that the pandemic has kept so many people away from seeing great exhibitions in museums and galleries, among other things. At the Albright Knox Gallery in Buffalo, street artist Swoon's "...
Paris Street Art : Spencer Elzey in Europe
As we continue our one week residency on BSA for Street Art fan Spencey Elzey, he takes you to Paris to see what is happening on the street there right now. If you were to try to characterize the na...
TONE Animates a Wall for Urban Forms in LODZ
Painter, muralist, illustrator and animator TONE (Robert Proch) has just completed the 27th mural for the Urban Forms festival in Lodz and has brought a touch of surreality and movement that hints a...
Dante Arcade and His Pop Up Windows in Murcia, Spain
For those who are nostalgic for the early days of the Internet and the pop of Lichtenstein shredded by the hands of Jacques Villeglé, here balances the bright fluorescence of Dante Arcade. The self-d...
Jaime Rojo Marithe Os Gemeos Suzuki WK Interact