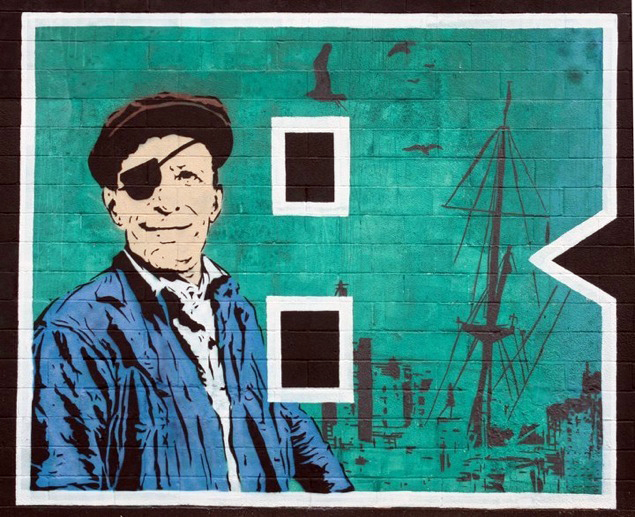 The India Street Mural Project is the inaugural project by a new public art group called North Brooklyn Public Art Coalition (NbPac), a loosely knit group of volunteers whose mission it is to join with local artists, community members, arts organizations and businesses to put up as much public art and street art as possible and re-connect community in the public sphere.

A lot of words all at once there, I’ll pause here while you digest.

Yes, someone else is taking Street Art and Street Artists seriously and is making a point to work with the artists and the community to bring more of it.

For the sceptical and jaded among you, I’ll translate: “GOOD NEWS”.

We’ll be talking to NbPac in more detail in an upcoming post but in the mean time, take a look at this cool new piece for the India Street Mural Project below. You’ll recognize the collabo is from three of your favorite street artists!  Mos Def some freshness in Greenpoint, even though Alphabeta has left.

Brooklyn Street Art: How did you guys get involved with this project?

Logan Hicks: The good ol boys over at Skewville asked me to get involved, and I gladly obliged.
Chris Stain: It was a dark night in early spring. I was contacted by a liaison who said they worked for someone at a factory in Bushwick…. oh wait that’s classified information.
Adam DeVille: I heard about NbPac and the mural project competition they had going on in Greenpoint on India Street.  Originally I contacted them about trying to get help funding a mural idea I had in Bushwick. I know the owner of the building next to the Factory Fresh (gallery); It’s a 300’ wall down a back alley that everyone dumps trash on. My idea was to spell out “Bushwick” in the Skewville font and have 8 different artists fill in the letters, kinda like an old school postcard.  Ciara, from NbPac was down with the idea but also asked me to submit to the India Street mural project.  Being a die-hard “Bushwickian”, at first I said no, but at the last minute I decided to give it a shot.

Originally I submitted an idea to do the whole wall at India Street by spelling out “Greenpoint” and having the artist of their choice fill in the letters. The main idea was to unify the whole wall instead of having separate murals with no connection to each other.  As a back-up I submitted a 20’x 25’ version, which they ultimately chose.

I remember the day Ciara called to congratulate me on winning the contest.  I was excited and asked if I got to do the whole wall. When she said they liked the idea but chose the smaller version, I was kind of a little…bummed they didn’t choose the big one.  I’ll save that for Bushwick.

Brooklyn Street Art: What is the inspiration behind the lettering and style of the piece?  With its bold greeting and poppy colors, it looks kind of like a giant Postcard you might get from Niagara Falls.
Adam DeVille: You called it. It’s like a postcard but instead of a beauty shot inside it would have a lil ghetto flavor.  The main idea was to include other artists but to still have an overall Skewville feel.

Brooklyn Street Art: Chris and Logan, how did you choose the images you used to fill in the B and K?

Logan Hicks: I took Chris’s lead on this. I had asked him what he was thinking and he said he was leaning towards something nautical because Greenpoint was a working class ship building area back in the day.  I tried to mirror his thinking.Chris and I are both from Baltimore, which is a working class town, so we both come from that blue collar mindset. For me it was about the work force that was behind this. I have been doing these pieces that have tons of people in them, and I had this image that I loved so I used that as the jump-off point for my side of the piece (the “K”).  I used the same color scheme (grey, black, red) that I normally use but tried to mix it up by using brush this time.  In the end I think the execution parallels what Chris’s does, so it holds together nicely.
Chris Stain: Yeah, I did a little research on the area and found that Greenpoint was a shipbuilding town. I had some images I cut some time ago and decided they would work well for the piece.

Brooklyn Street Art: The images look like they are working class or poor people.
Chris Stain: The image I used is of a dockworker actually from the South Street Seaport back when it was functioning.

Brooklyn Street Art: What role does a public art project play in the community? Does it impact people’s perceptions of a neighborhood?
Chris Stain: Ultimately its subjective but I feel it does affect how people view the area, especially outsiders.
Adam DeVille: It’s weird because I don’t think anyone goes down this street anyway except to get high. Maybe now more people will come down this block and or have something to look at when they get high.

Brooklyn Street Art: Is there an overall message or meaning to this piece?
Chris Stain: The meaning to me is one of history of the area and (it’s a) a show of admiration for the hard work of the people who built the community.
Adam DeVille: The meaning is “Welcome to Greenpoint”, but you should really check out Bushwick.

OverUnder in LA and Vegas ; Faith, Family, and Gambling
OverUnder recently traveled to Las Vegas and LA to do some mural commissions for a large brand and he tells us he was having a bit of guilt for selling his soul to the devil to pay the bills. That was...
Flying High With ROA in Brooklyn, NYC
As the sun sets, a mighty and serene Ibis rises 35 feet on a battered Brooklyn wall ROA ROA begins his portrait of the Ibis, a wading bird common in the marshes on the mid-Atlantic coast of th...
ROA and Martha Cooper in Puerto Rico: Dispatches from the Island
Puerto Rico, "La Perla del Mar" (The Pearl of the Sea) Or "La Isla Bonita" (The Beautiful Island") had a huge earthquake on January 7 and many vital services and systems have not been restored, causi...
BSA Images of the Week 09.17.17 Urban Nation (UN) Special
Welcome to Sunday! This week we have a special edition of BSA Images of the Week; Dedicated to stuff on the street for last nights opening of Urban Nation Museum of Urban Contemporary ...
BSA Images Of The Week: 05.08.16
Cities are urgently playing the deliberate gentrification/beautification card by bringing in the murals to give the place a facelift: Richmond just finished their third, Chicago is gearing up fo...
Ad DeVille Chris Stain India Street Mural Project Logan Hicks Steven P. Harrington