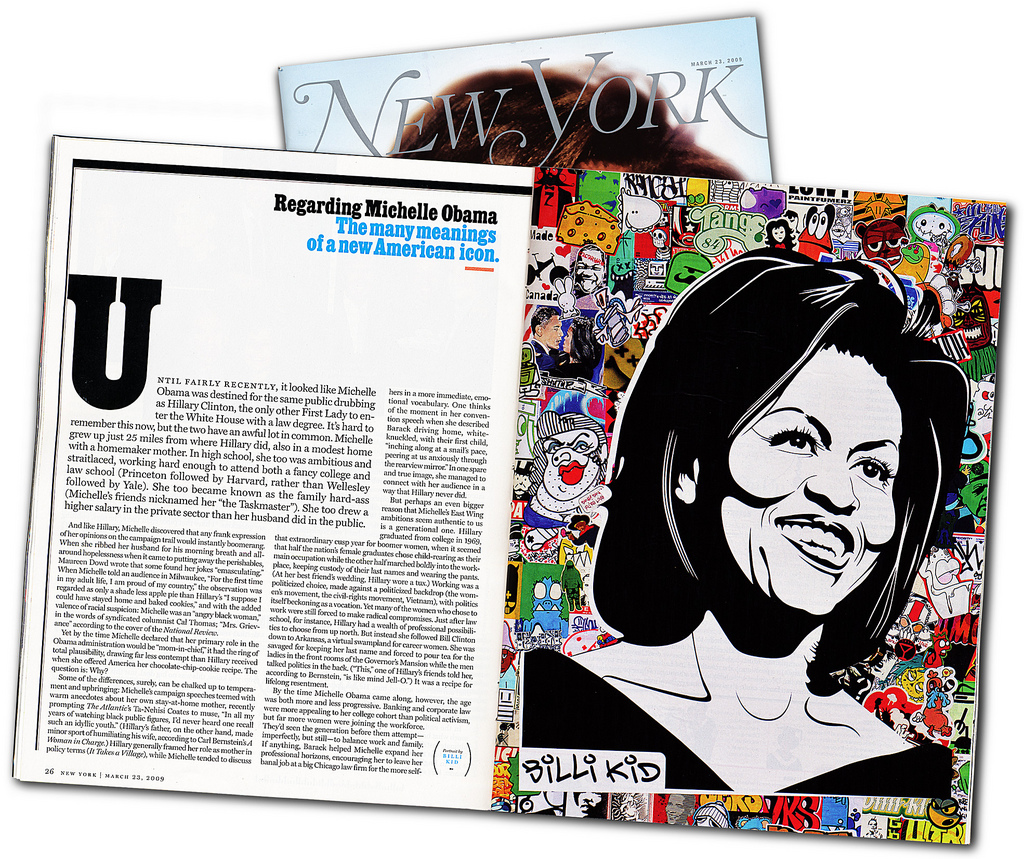 Maybe it’s history in the making, or myth-making, maybe it’s unending fascination with celebrity, but many artists, street artists included,

have produced art about Obama in the last 12 months. The new administration is a machine in motion this spring, and while the haterz are looking for ways to play down Obama’s successes, his missus is not missing an opportunity to engage the press with her Harvard Law School graduate brain, her support of military families, her commitment to volunteering, and (oh yes) her fashion statements at the G20 meetings and Personal Displays of Affection toward the British Royal Family (PDABRF).  More popular in polls than her husband, Mrs. Obama’s personal and professional history are being fleshed out daily, and her place as a cultural icon is happening before our jaded eyes.

Brooklyn street artist Billi Kid is no stranger to “Obamart”, having shown his own portrait work of Barack when he participated in a group show in Washington, DC in the days preceding the Presidential Inauguration called “Manifest Hope:DC” with 150 artists including Shepard Fairey and Ron English. Truth told, Billi has done quite a few versions of the president over the past year, feeling like it was a good way for him to participate in the public discussion about the political landscape.  His sticker collaboration collage work has been slapping up in magazines here and abroad, and it’s helping his fellow artists get exposure along the way, which he loves.

Preparing for a new show at ArtBreak Gallery in Brooklyn May 2nd, (this time as a curator), Mr. Kid talks to BSA about his engagement with the political as personal and his experience with his recent Michelle Obama piece;

Brooklyn Street Art: How did you score a full page in the New York magazine article?
Billi Kid: Luck had a lot to do with it. I pasted a recent piece titled “Greed i$ Good” on the wall of one of my favorite spots on 22nd street, outside of Comme des Garçons. It happened to be right in front of where the photo editor (Jody Quon) of New York magazine lives. One thing led to another.

Brooklyn Street Art: Hundreds of artists made portraits of Obama. Do you think we look to artists to help us understand these people?

Billi Kid: I can’t speak for anyone else, but as a registered independent, I became completely engrossed with the campaign our current president was running in 2008 and immediately re-registered as a Democrat for the occasion. Adding my voice to the streets became a natural extension (of that).

Brooklyn Street Art: Can you talk about the technique you used to produce this?

Billi Kid: I’m known for my combo slaps and had labored during the campaign to get everyone I trade stickers with into the mix. In particular, boards using the epic Obama for President poster by Zoltron as a centerpiece. It simply involves collage techniques and composition. One of these boards made it into Time magazine’s man of the year issue with a Shepard Fairey portrait on the cover.

The Michelle portrait involved a breakdown of her likeness into a two-layer stencil. The actual portrait used in the magazine was a print pasted on the collage board, but this would be same technique used to execute my stencils. I plan some stencil boards of this in the near future. Look for it on the streets.

Brooklyn Street Art: Your work typically employs a lot of color, why did you chose simple black and white?

Billi Kid: So far all of my stencil boards are colored backgrounds with black and white stenciled layers on top. I was planning to do a stencil originally, but time did not allow it. Besides that, stickers became a factor.

Is it all black and white? (courtesy Billi Kid)

Brooklyn Street Art: What is the significance of placing her head on a bed of stickers?

Billi Kid: In conversation with the magazine, I understood they wanted artists to interpret their ideas about Michelle into their portrait. For me, it became clear that I had to use stickers because they represented community and inclusion to me. Precisely what the Obamas are about. It felt right to get all of my brothers and sisters from around the country and the world into the magazine. Kind of a one-world point of view.

Brooklyn Street Art: Have you heard from the other sticker artists who are in the piece? Were they excited?

Billi Kid: Yeah!!! They love this about my work. They trust that the work goes up, instead of into a private little black book. That they get published is icing on the cake. This approach pays ample dividends for me. What goes around comes around.

Brooklyn Street Art: A lot of artists want to be published but aren’t familiar with the process that happens during editing. Was your piece altered at all by the editors? Was there a lot of back and forth discussion?

Billi Kid: We discussed my idea at length and fortunately I had plenty of samples to illustrate my intent. The only discouraging edit was the fact that they cropped the image so tight. The board went temporarily up somewhere in the Bronx and I wanted the environment to be part of the final cut. Unfortunately, this did not happen – for good reason – it was about Michelle after all, lol.

The original piece by Billi Kid

Brooklyn Street Art: Do you have any special connection to the first lady, her personal story?

Billi Kid: Only in so far as what we all have heard about her. Like her husband; a self-made independent person who picked herself up by the straps of her boots and carved a place for herself in the American landscape. Precisely what Republicans always say about their vision for America, no handouts, just the courage to move forward with the gifts given to you by our creator.

Brooklyn Street Art: What role do you think Street Artists play in the public discourse of politics or social issues?

Billi Kid: The same role graffiti has always played on the word stage throughout history; to give voice to opinions not paid for by the ruling parties. Until recently, it had always been about politics, not just pissing on the wall.

Brooklyn Street Art: What project are you working on right now?

Billi Kid: I just completed four canvases commission by the Ace hotel opening in NYC and am now co-curating, with the incomparable Luna Park, an exiting new exhibition, theGREAToutDOORS opening at Artbreak Gallery in Williamsburg May 2nd.

Project M/3 Opens for UN in Berlin and Martyn Reed on Table Etiquette
"good table manners, social awareness, whether or not they are house trained..." Project M sounds like a James Bond plot feature, and if you’ve seen the smartly swarthy man of mystery at the helm ...
BSA Images Of The Week: 06.24.18
As upbeat as celebrations like today’s LGBTQ Pride events are here in NYC, they are rooted in defiance of the suffocating unjust norms that entrapped people in this city and across the country f...
BSA Picks for Bushwick Open Studios 2014
So Summer is officially here and with it comes Bushwick Open Studios (BOS) - in fact close to 600 venues are opening their doors for the next 3 days and you are encouraged to just wander the streets...
Stavanger Norway Celebrates Brooklyn Street Art! The NuArt Festival
EXCLUSIVE BROOKLYN SPECIAL! NUART-NUYORK Stavanger Norway meet Brooklyn New York. Some of the worlds leading street artists are flying for a week or two to Norway to participate in a street art fe...
Inside the "ShineBox" With Rae McGrath from Brooklynite
A truly original and dynamic group show draws attention to what it means to survive in a shrinking economy. Shoe- shiners and Artists to the rescue! photo credit: Adam Jones, Ph.D. While you ar...
Artbreak Gallery Billi Kid FKDL Judith Supine KH1 Luna Park Peru Ana theGREAToutDOORS