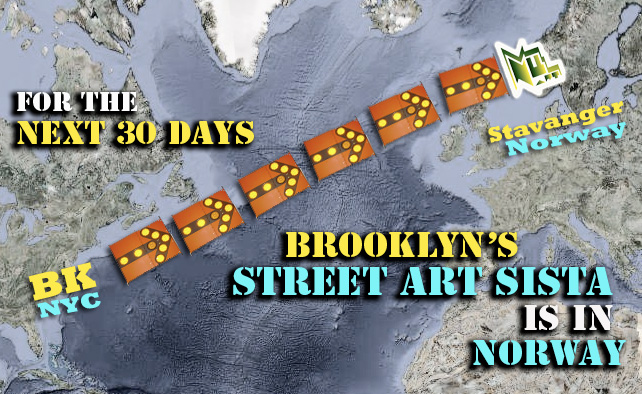 Some of the worlds leading street artists are flying for a week or two to Norway to participate in a street art festival that celebrates the Brooklyn Street Art with many of the same artists you’ll find right here. Leon Reid arrived yesterday, Chris Stain tomorrow, both to prepare to hold workshops with creatives and Norway National TV’s main cultural program “Safari” will be interviewing and following Swoon on the streets.

As you know, New York is a city of immigrants, and the first Norwegians launched for New York 184 years ago and established their largest colony in the BK – creating a neighborhood of 200K plus people speaking Norwegian in bars, stores, and streets of Brooklyn.

The Nuart festival calls back the Brooklyn Flava by importing some of the greats from the streets of Brooklyn to exhibit, teach, and revel citiwide with panel debates, talks, film screenings, and fundraising.  It’s all BROOKLYN, all the time.

Over the next few weeks BSA will keep in touch with events in our Sista City, Stavanger and get you some insight into the cool stuff that happens there for the Nuart Festival.

Chris Stain on the wall at NuArt

BSA Images Of The Week: 10.27.19
Welcome to BSA Images of the Week. The streets are alive! New York doesn't stop, even if your heart does when you are looking at the White House and the ongoing attack on institutions you bel...
Sneak Peek "Concrete to Data" at Steinberg Museum
Curator and artist Ryan Seslow has pulled off an overview of art on the streets and the practices employed, minus the drama. So much discussion of graffiti, Street Art, and public art practice can con...
Images of the Week 05.03.09
Fun things to stumble upon while you are singing in the rain This number 9 is always coupled with a cartoon character like on Sesame Street.  Try to check your reflection in the well-positioned c...
Gaia: A New Original at Mid-Semester: Part II
This is the second half of a two part article and interview with street artist Gaia. Click here for Part I Somehow the real commitment to the topic of animals as metaphor seems more tangible ...
Welcome to the Jungle: HELLBENT's Wild Kingdom
PREPS FOR HIS PARTICIPATION IN AD HOC ART'S "WILLOUGHBY WINDOWS V 2.0" Brooklyn-Street-Art-Hellben Welcome to the Jungle; Hellbent’s Wild Kingdom at Willoughby VWindows 2.0 For the second year...
BEN WOLF BRAD DOWNEY Chris Stain David Choe Graffiti Research Lab Judith Supine LEON REID Logan Hicks Skewville Swoon