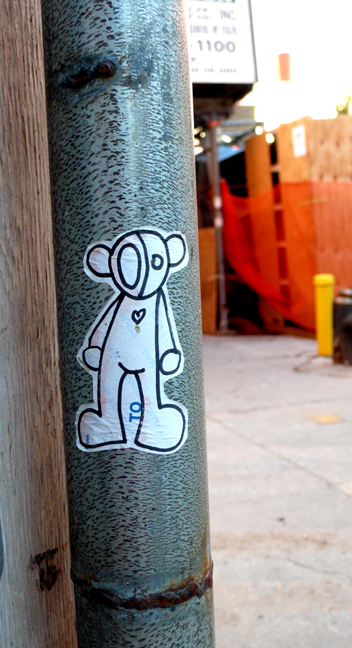 You’ve seen him, sometimes in a vest and tie, sometimes with polkadot pajamas, a fireman’s uniform, or a formal tuxedo;

The bear dude is on stickers all over the place. At first C.Damage was pretty quiet and maybe a little reserved, like the bear, but with time and practice the style quotient has evolved and now the real style is taking off.

Coming up this Friday at Ad Hoc you can see a new wood block of this bear at the Brooklyn Block Party, a strong show concentrating on one specific technique really popular among many Brooklyn street artists right now.

Brooklyn Street Art: When was this little bear Dude born?

C.Damage: He was born in Chicago, around 2004. He went through many transformations in his process to becoming the bear you see today. For a long time, he didn’t have feet! I couldn’t figure out what his lower half looked like, so he was a waist-up character. But he’s finally comfortable with himself.

Brooklyn Street Art: What is this bear saying?

C.Damage: The conversations he has with other people are usually private. Every once in a while, I’ll overhear someone say positive things (about the bear) – that is, that it makes them feel good. I am more concerned with eliciting a response than the type of response. Some people like him, some people might not like him. But on the whole I think he’s a pretty likable character. He’s a jokester – he doesn’t take himself too seriously.

Brooklyn Street Art: One time in Williamsburg I saw one of your bears in Hasidic garb. Does Mr. Bear like costumes?

C.Damage: Now that he’s comfortable with himself, he’s been playing around with different personas. I think the first costume he ever put on was a viking hat and giant clock chain as Flava Flav. He also likes to wear t-shirts – the “I love NY” one is his favorite – and suits. And there are usually holiday versions – Santa, a pilgrim, a mummy, Uncle Sam, the Easter Bunny. There are a lot of variations. Some of them last longer than others. There’s some one-of-a-kinds up out there too.

Brooklyn Street Art: Now that cold weather is settling in over Brooklyn, will he be hibernating or looking for warmer climates?

C.Damage: He’ll still be around to face the New York winter, but he is also taking a trip to Los Angeles to spend January 9 to February 6 at the From The Streets of Brooklyn show at thinkspace gallery. The show is curated by Ad Hoc Art in Brooklyn. It’s a pretty amazing way to start the new year, after wrapping up 2008 with the Brooklyn Block Party at Ad Hoc Art.

Brooklyn Street Art: The work that you are showing at Ad Hoc is definitely your style, but it’s different from the stickers and paintings that people know you for. Have you made blocks much in the past?

C.Damage: Yeah, I’ve done small block cuts for stickers in the past, which is how I got into this show, but doing a larger print was definitely new. This was a completely different scale for me, which is funny because if you look at the show, the size of the other artists work blows my piece away. I’m not known for my print work, or for doing giant prints for wheat pastes, so people might not be expecting to see me in this show. But when people see it, they’ll make the connection to my stickers and paintings. I think it’s a good new direction for my work, but not too far from where I was before.

C.Damage displayed a new range of approaches at the Brooklyn Street Art party in May ’08 (photo C. Damage)

Brooklyn Street Art: How did you get to this point and how does it fit your artistic style?

C.Damage: I have been putting up work for a few years, mostly unnoticed, but somewhat consistently. I think I got to this point by just doing my thing, regardless of other people’s opinions or popular trends. I have a long way to go until I get to where I want to be, with solo shows and a more complete body of work. But I think I’ll get there through persistence. There’s no time limit for me to get there, so I’m just enjoying the ride.

C.Damage: Well, 2009 starts with the From the Streets of Brooklyn show in L.A. and a cool show I’m in around Valentine’s Day that is still coming together. I think some of my work will be published in the near future too; not too long ago, I had the pleasure of talking with Martha Cooper, and she took some great photos of some of my stickers that will be shown in her next book, released soon. I’m doing a few more blocks for prints to work on my style, so maybe you’ll see some prints up in the street at some point. Beyond that, I’m not sure what’s next, but I’ll take it as it comes.

Check out C.Damage’s new block print as well as those of many others at the Brooklyn Block Party this Friday at Ad Hoc.

Civic Dialogue & "Fake Walls" : A New Interview With Gaia
He calls them “fake walls”; these mockups of murals in Baltimore that feature adorable pets. With these clever photoshopped pieces of mural fiction the Street Artist Gaia is perhaps skewering the co...
Images Of The Week: 01.26.14
BSA Images of the Week this week starts with a series of non Street Art photos because they are inside a hallowed hall of NYC high culture, namely the Phillip Johnson designed modernist building t...
The 2013 BSA Year in Images (VIDEO)
Here it is! Our 2013 wrap up featuring favorite images of the year by Brooklyn Street Art’s Jaime Rojo. Before our video roundup below here is the Street Art photographer’s favorite of the year, sn...
BSA Images Of The Week: 05.17.15
Shout out to all the great Swoon fans we met last night during the artists talk with her. All the seats were filled so it was standing room only in the back but yet it felt so intimate. Ya'll ar...
Interview: Inside the "The Thousands" and Swoon's lock box with Michael "RJ" Rushmore
After spending most of 2009 in preparation, Michael "RJ" Rushmore is one week from the opening of "The Thousands", a retrospective survey covering artists of the last few decades that led to what we'r...
Ad Hoc Art C. Damage David Ellis Dennis McNett Elbow-Toe Gaia Imminent Disaster Judith Supine Martin Mazorra Mike Houston Swoon