A History of Queer Street Art 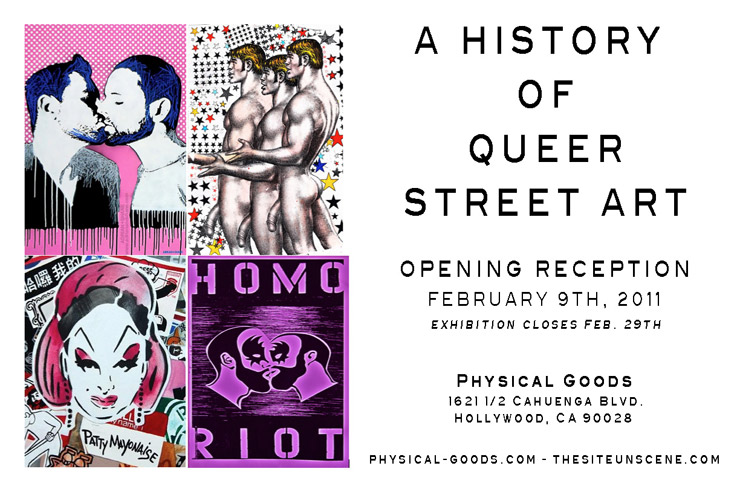 A HISTORY OF QUEER STREET ART opens for a limited engagement in Los
Angeles with an opening reception on February 9th from 7-11pm.

A History of Queer Street Art opens for its month long engagement at Physical Goods
Gallery in the heart of Hollywood, CA on February 9th and will run through February 29th 2012. Originally curated and exhibited in San Francisco by SF based street artist Jeremy Novy, the exhibit is re-imagined and brought to Los Angeles by LA’s own Homo Riot.
A History of Queer Street Art, first presented in 2011 at the SOMArts Center in San Francisco, documents the work of queer and pro-queer street artists from around the world. Spanning more than two decades of work, the collection includes pieces by notable queer street artists as well as showcasing present day street activists.
At the heart of the History of Queer Street Art is a timeline of works collected by Novy which incorporates prints, stencils, stickers, photos, street pasters and even the gallery’s walls — creating a “street art experience” from a queer perspective. The Los Angeles version of the exhibition, produced by Homo Riot, will also feature new works by well-known European street artists like Paul Le Chien, Adrian & Shane, as well as American mainstays like Prvtdncr and Jilly Ballistic, and many other young and emerging queer street artists. Homo Riot has curated video presentations as well as art installations throughout the Hollywood gallery to further enhance the experience.

“It was important for me to bring this show to Los Angeles. Not only is LA one of the most
influential cities in the world when it comes to street art but historically, the city has been the site of many central movements in the struggle for LGBTQ equality. I hope this show will be seen as an important milestone in the queer artistic history of LA.”…Homo Riot

“It’s important to celebrate our history and to know the outstanding LGBT artists past and
present who are bold enough to express themselves in public. I hope this show inspires future artists to create art for the world to see,” Brian Meiler of Physical Goods Gallery.