Skewville
The boisterous Skewville Twins turn 80 years old combined and they are inviting you to come and celebrate with them at Factory Fresh in Bushwick for an evening of art, fun and mischief. 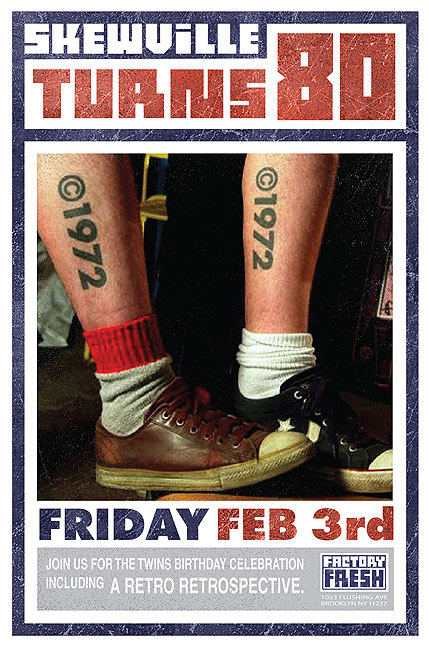 With great pleasure Factory Fresh presents Skewville’s 80th Birthday: A Retro Retrospective to celebrate the art and life of this duo. The  Skewville twins has been making  things since  birth,  from building club houses in  the 70’s,  graffiti in the 80’s, then on to commercial ventures in the 90’s. In  the  past 13 years,  they have been making innovations on the street and in the art galleries with their stylized work and installations. Best known for their wooden sneaker mission ” When Dogs Fly”  which continues to evolve and has grown to many new cities and editions.
This past year they returned from there final european show in the UK at High Roller Society and did a coast to coast tour showing at Pawn Works in Chicago, Black Book in Colorado & White Walls in San Francisco. They have also done a large scale murals for Brooklyn’s North Side Festival As well as Creating The Bushwick Art Park and making an outdoor Prototype at the New Museum. The Bushwick neighborhood summer favorite for 2011 was when  Skewville  painted  an entire building to look like boombox.

As the largest collectors of their own work.  Skewville will showcase past favorites such as the original giant “Hype” signs from Wooster Collective’s 11 Spring Street show in 2006. as well as the Skewville “Lawnmower Stamper” that prints out ” Keep on Grass” and The Secret Laboratory Book Shelf Door from Basement AIr Show in 2005. Also featuring their wooden sneaker archives from 1999 to present as well as  recent artworks from the past few years will also be available and on display.
Skewville’s 80th Birthday 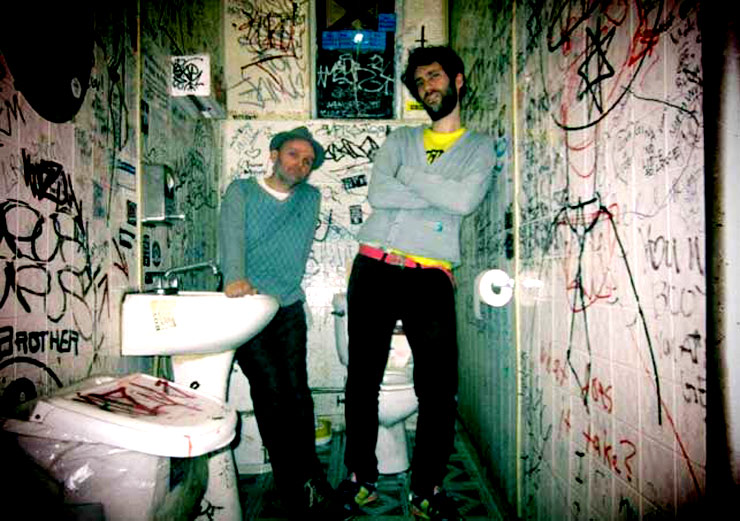