So if you need to confess to an eating disorder or that you were molested by the mailman or if you have a book on self-empowerment for toads, you better call your P.R. agent and get yourself booked because in 2012 the world as we know it simply ends.

I saw the entire story from multiple perspectives on CNN today in the dentists’ waiting room as I counted the minutes till my wisdom tooth was scheduled to be yanked (OOOWWWWW).

Incidentally CNN had a little story about the US Senate debating the passage of the largest federal program in United States history.  That 90 second story was sandwiched in between Oprah graphics and and heated conjecture about what the future without Oprah would look like.

WK Turns His Opening Into a Perp Walk

At his recent opening at Subliminal Projects in Los Angeles, 200 people were arrested.

Usually at an art opening the artist is (A.) lingering around the gallery uncomfortably answering questions about the work, posing for a picture in front of it, collecting phone numbers of groupies.  Unless you are the shy type, in which case (B.) you are huddling in the back office taking nips out of a flask, doodling on the desk calendar, and waiting till the gallery starts turning out lights.

Recently apprehended art fan flattened against the wall and photographed by WK.

OPTION (C.), if  you are WK Interact, is you think of almost everything as performance art, and every person as part of an installation.  Then at YOUR opening you criminalize any willing participant and arrest them and put them through some playful militaristic institutional dehumanizing.

After finger printing there are some forms to fill out.

“I was really impressed by the turn-out and the audience enthusiasm to partake and let me ‘book’ them. Almost 200 people [about half the audience] waited in line to be fingerprinted and have their mug shot taken, incorporating another sense into the interactive experience: touch. It’s not often I get to be that intimate with the viewers, who actually became a part of the show through their participation and who are now part of the  installation that hangs in the gallery for the duration of the show,” said WK.

Who knew jail could be so much fun? “I  simply did a mug shot that night and I let the crowd be part of my show.”

The artist posed in costume and ran the guests through the penal mill with dry wit and gentle but firm authority. According to attendees, at first the experience was disconcerting, then funny, then funnier (that could have been the wine).  WK himself at first tried to keep a mean-looking demeanor but clearly was having too much fun.  This is why I always meet him in a public cafe, preferably with a bodyguard around the corner.

After booking, the criminal records were posted as a public safety measure.

Brooklyn Street Art asked WK what was the procedure for processing the criminals in attendance:

“I  simply did a mug shot that night and I let the crowd be part of my show. Then I put their arrest record on the wall …..  each one was finger printed and I Polaroid-ed them. I ask them their age and height in a typical arresting scenario. I recreated a desk at the entrance,” he recounted with satisfaction. And what was the reaction of the gallery guests? “The crowd was very enthusiastic!,” he reports. And for the officer on duty?  “It was busy night of 4 hours’ work.”

His firearm was how big?

I’m not sure if there will be more audience interaction and role playing at WK’s next opening, but for this group, it was certainly captivating.

The arresting officer with guests.

Thank you to WK Interactive for these photos.

HERE is a good video to further describe the criminal records theory.

WK INTERACT at SUBLIMINAL PROJECTS from Joshua Gibson on Vimeo.

How To Blow Yourself Up NOW ON VIEW 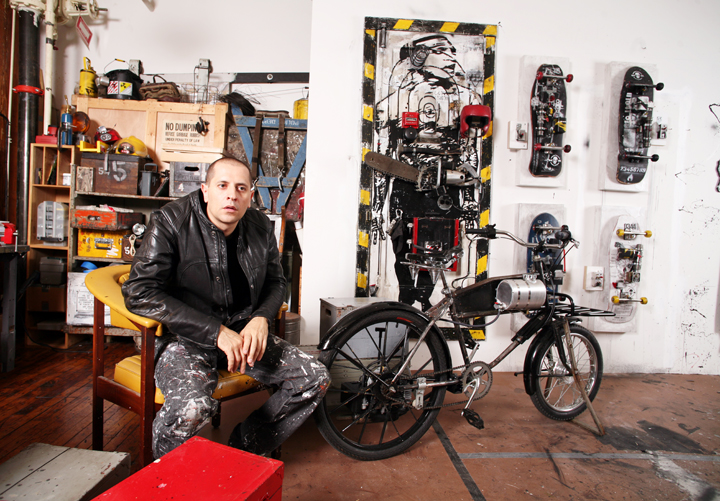 Street artists are often in tune with the subterraneal rhythms of the city, its people, the movements: the psyche.  Their affinity for the wild unscripted truths that pop up asymmetrically as a normal course of everyday working in the streets makes them better positioned to divine the messages.

Can I help you with something? (image WK Interact)

WK Interact’s new show “How To Blow Yourself Up” addresses the unspoken fear always lurking in our unspoken New York day; dark wire fears strummed by Orange Alerts a few years ago, the smell of acrid smoke in the subway, the installation of thousands of cameras all over Manhattan, and “entertainment” like “2012”, a disaster film based on end-time prophecies of ancient religions where the world suffers cataclysmically.

If only WK was trying to calm your fear.

Hey dudes, is this what you mean by Half-Pipe? (image WK Interact)

Maybe, instead, he is merely calling the bluff of the fatalists by wrapping it around a copper coil of twisted irony.  Maybe he is giving you the means of your own self-destruction so you will feel self-empowered! It’s so hard to tell.

The show opening November 7th at Subliminal Projects gallery in L.A. turns friendly accessible objects you might associate with fun into blunt devices of nihilistic doom.  It used to be fun when you saw this stuff on “Mission Impossible”, but when you personally see a skateboard equipped with what appears to be a pipe bomb, your blood can turn cold.

He’s added a dash of color to his typical black and white, but it’s not for whimsy. Think of police tape, hazmat suits, 9-Mile Point blinking red alarm lights. Cheery.

Brooklyn Street Art: First, about the name of the show…How alarming!  Are you encouraging people to self-detonate?
WK Interactive: We are all wired with our very own internal detonators. The artificial devices, which I provide, are to encourage individuals who find themselves applicable to the scenarios to reflect on their state of affairs, which may bring them to the point of pressing the buttons.

Brooklyn Street Art: As a New Yorker, it is very thoughtful of you to create explosive devices for people who are the move!
WK Interactive: They are also figurative symbols of age, authority or subjection and social position.

Brooklyn Street Art: Lets see now, you have skateboards, bicycles; do you have a nice exploding car? Those are always popular.
WK Interactive: The goal was to keep it economically viable.

Brooklyn Street Art: Some of these pieces look tempting to touch, but I’m afraid my hand might blow off.
WK Interactive: By all means – touch………

Brooklyn Street Art: On the streets of New York, you use almost exclusively black and white. Do you feel more colorful behind closed doors?
WK Interactive: The colors used are all primary and ironically relevant in conveying the importance of the objects in the pieces, for example Police Blue and Dynamite Red.

Oh, the guy’s a real cut-up! The more you try to nail him down, the better he is at evading you. So maybe we should just embrace the chaos, and realize WK is only reflecting back to us what we already knew.

“If you believe the world will end in 2012 and you can’t do anything about it, maybe it’s better to blow yourself up when you feel like it,” says WK.  (photo WK Interact)

The clock has been set and is ticking until November 7 when stark street art fantacist WK Interactive detonates his latest cluster of objets at SUBLIMINAL PROJECTS in L.A.

Always more than pleased to tap into your fears, the original Interactive street artist hand-stretches your comfort level with How to Blow Yourself Up, a corrosive blast of physical possibility and psychic uncertainty.

“Brooklyn Street Art: Some of these pieces look tempting to touch, but I’m afraid my hand might blow off.