BSA Special Feature: Joe Caslin: “We will let no life be worth less”

Street artist Joe Caslin, known for his large-scale black and white drawings, has released a compelling and emotive short film entitled ‘The Volunteers – We will let no life be worth less’. The film follows his installation of a four story drawing on House Two in Trinity College’s Front Square. The film focuses on drug addiction, mental health, and our collective response to both and showcases the efforts of 20 people in Ireland working toward re-framing the conversation around de-criminalization and rehabilitation.

BSA has brought you Vermibus since he started messing with glamour, testing the limits of passersby ability to ignore his melted models. A protest against the classist beauty brands that insult us in our public space, Vermibus’ posters re-frame the conversation, jolting you into a grotesque brutalism, sometimes ornate, sometimes darkly disturbing. Here his latest solvent-based poster campaign appears on the metro in Paris, neatly framed and waiting to catch you eye. He calls it “In Absentia”.

The latest video from Contorno Urbano with Fernando Leon.

A post-modern meditation on mark-making. A soul-stirring piano score accompanies this layered montage of graffiti writing and abstract painting. Here there is destruction. And deconstruction. And recollecting of playful errant thoughts and passionate impulses and suite soliloquies, machine gunned and splashed like hot massage oil across the surface like so many erudite dialogues you pined for. Masterful? Maybe. Poignant. Positively. Transcendent! You decide.

Also, it’s an ad for a book duo called Graffolution and Dead and Afterlife of Graffiti, both which we hope to read one day. Until then, this video puts us in a great state of mind.

Interviews with Ron English, Skewville, Gaia, and Logan Hicks, and captures a bit of the flava last weekend.

Curator Frankie Velez has a show on West 36th Street in Manhattan that offers itself as a bit of a missing link between a graff, street art, and fine art. Here’s a stern voiced review.

Gaia’s posted his sketch for his piece “should be like a twenty foot wall when done with it. Its skulls from dance with death, acorns, oak leaves, cabins, american stars and possums. All ATL baby!” 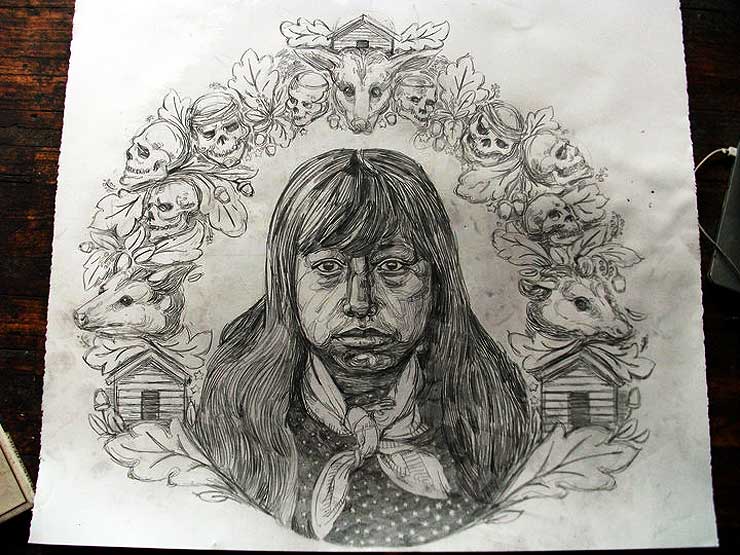 Classic Rick James by the Pool