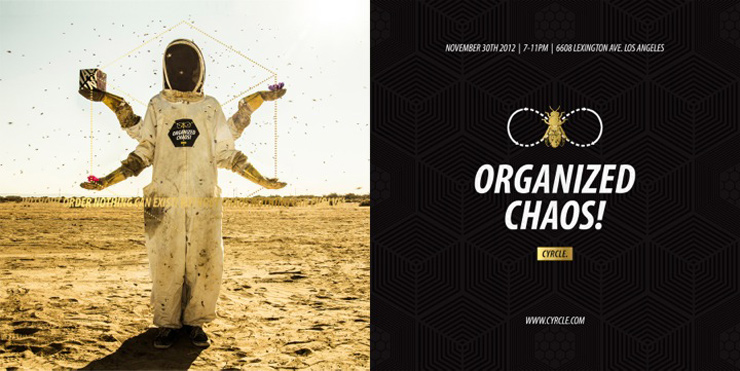 WITHOUT ORDER NOTHING CAN EXIST!
WITHOUT CHAOS NOTHING CAN EVOLVE!
This eponymous mantra resounds throughout the incredible breadth of work in CYRCLE.’s second solo show, opening to the public on November 30th at 6608 Lexington Avenue, Los Angeles CA 90038.  The “ORGANIZED CHAOS!” theme binds the entirety of the show and defines the creative process that brought the art collective to their philosophy, relying on the metaphor of intertwined relation between bee and flower to illuminate the symbiosis between art and society.
It is interactive.
It defies the boundaries of the archetypical gallery show.
It showcases a tactile experience and encourages participation.
The “ORGANIZED CHAOS!” show is the embodiment of what CYRCLE. has come to represent in the Los Angeles art community.  Refusing to constrain themselves to a particular definition, as street artists, graphic designers, or traditional fine artists, the collective is interested in what the function and form of the work itself demands.
Artist Shepard Fairey, best known for his work on the 2008 Obama Hope campaign and his Andre the Giant OBEY propaganda, says:
“People frequently ask me who the new upstarts are in street art… I’d say CYRCLE., but that would be underselling the diversity of their talents and the depth of their conceptual process. CYRCLE. work in many mediums and techniques, utilizing whatever approach most powerfully delivers the concept and aesthetic. CYRCLE. are surprisingly focused and rigorous for some young punks.”
JR, a 2011 TED Prize winner, who is currently expanding his Inside Out Project in Japan states, “CYRCLE. bring back the Power of working as a colléctive.”
In a physical manifestation of CYRCLE.’s signature brand of chaos, the viewer will be encouraged to become the bee and to initiate order within the chaos of the human movement occurring within the show, therefore creating a type of performance art within the actual pieces of the show itself.
The show is produced by Fatima Robinson and Rhea Scott, in association with Black Dog Films.