Street Artist Atek84 wins the award for best concept by staging this full immersion public installation/renovation of a junk food joint into a church where junk television is worshipped 24/7. He says it is a “modern church” where the philosophy that TV is the new god. Over the period of months he slowly transformed the property in his hometown in Belgium into a high profile critique of the power of the almighty television on the perceptions and behaviors of society – especially the degrading effect that junk television has on our minds and spirits. To drive home his message of the omnipotence of the big screen, he created an installation on a wall about 9 meters high with a real working flatscreen TV on it, playing day and night.

A new video follows Street Artist XAM through his process for imagining, creating, and installing his new campaign of homes for birds in Lower Manhattan.

A minimalist modern monochromatic sketch on shape, texture, and touch from KLUB7 as they paint clear glass and the camera plays with light, shadow, and environmental factors. It’s far more visually stimulating to watch than for us to describe.

Element Three: No Mercy In The Heart Of A Wolf

Return with us now to the joys of the neighborhood wall. This New Jersey crew suffered some dissing of their previous piece that featured the bare breasts of a woman in it’s metaphorical representation and despite numerous repairs to their work, ultimately had to abandon the composition because of one dork in the neighborhood who kept protesting the horrible breasts. From the ashes of their collective disappointment, the team decided to use it as inspiration to created something else and come back and wreck the wall. This video is a record of the creation of the new piece “No Mercy in the Heart of a Wolf”.

Language alert – the first musical accompaniment contains vulgarity that may offend some of the kiddies.

A thoughtful retracing of certain elements and textural emotions in the making of murals for Articulate Baltimore, a district improvement mural program that featured the work of peeps like Pixel Pancho and locals Billy Mode and his homeboy Chris Stain, and of course head of the ship Stefan Ways, among others.  Articulate Baltimore is also co-founded by Jesse James.

The City of Baltimore just got hit with its second large scale mural project in one calendar year as Articulate: Baltimore joined Open Walls Baltimore during a five week period this autumn. 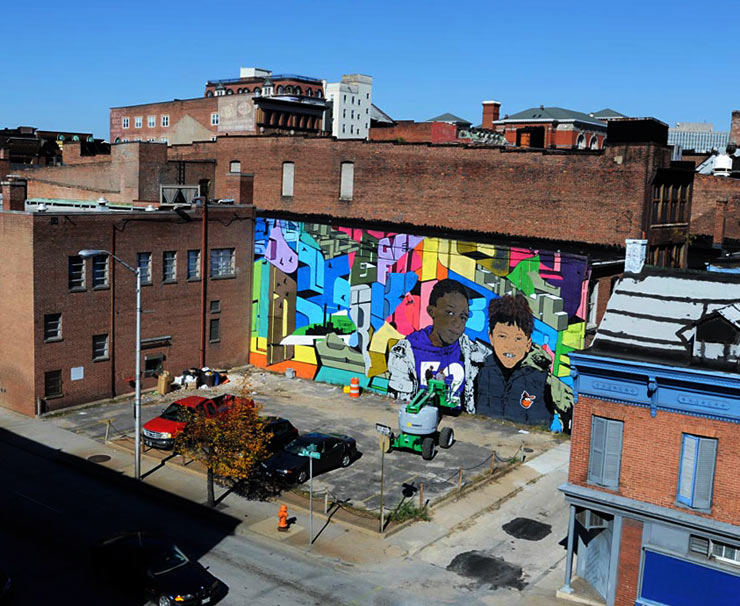 A mixture of local artists and some Street Artists who are known internationally, the project is sponsored by a collection of public, private, and tourism development concerns as a way of activating a small selection of the city’s huge inventory of vacant spaces to “increase the visibility (of) the new westside district and encourage more visitors to frequent its venues”. With this sort of laser-sharp urban renewal employed in a very confined area, we may be witnessing the splintering of so-called Street Art festivals into more focused venues, employed in a more selective way to achieve specific ends. 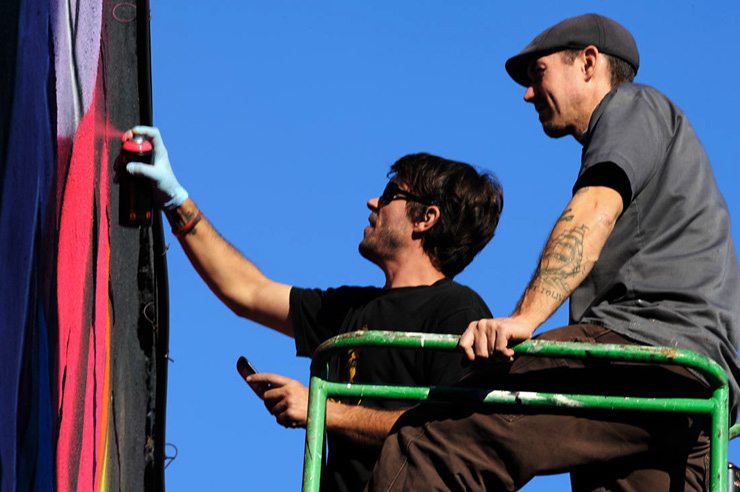 Baltimore natives and well known Street Artists Chris Stain and Billy Mode get to do something at home for a change. Articulate, Baltimore 2012 (photo © Martha Cooper)

The list of artists in Articulate: Baltimore includes artists Ways & J. Digital, Jessie Unterhalter & Katey Truhn, Indigo, HKS 181, Chris Stain & Billy Mode, Pixel Pancho, and 2501. Co-curated by Maryland-based artists Stefan Hauswald and Jesse James, the full collection covers roughly a two-block area that is very near the center of downtown.  The whole initiative appears to be one conceived with rejuvenation in mind, as public art often does for previously moribund areas. According to the website for Articulate, all of the artists realize that their work isn’t meant as a permanent installation and may be replaced at any time. “The artists expect their impact to be powerful but limited in duration— they expect that their work will be replaced over time, perhaps a matter of months or years.”

Many thanks to photographer Martha Cooper, who was there to capture official images of the installations, and she shares them here, including some that are exclusive to BSA. 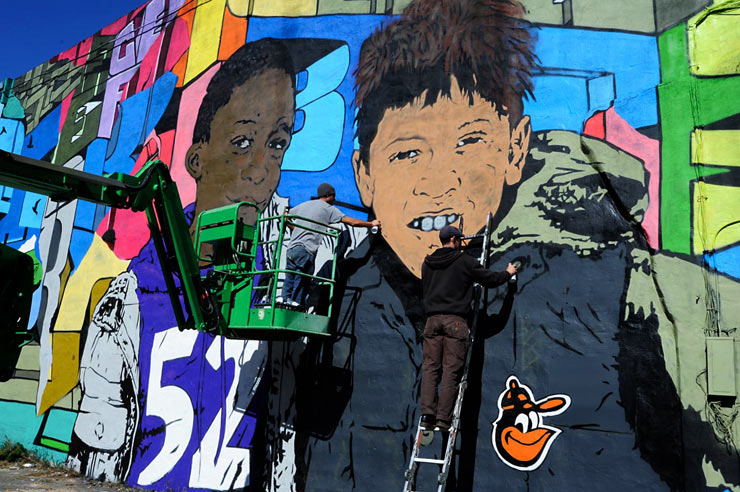 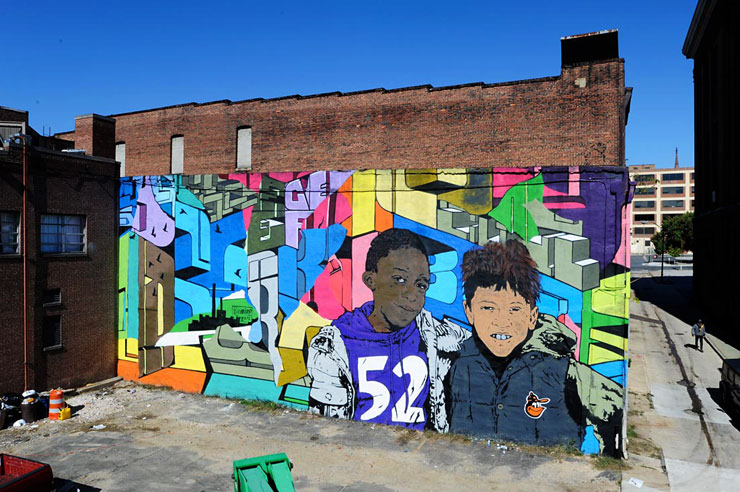 Combining the colorful 3-D letterforms of Mode and the stencil-styled portraiture of Chris Stain for Articulate, Baltimore. 2012 (photo © Martha Cooper) 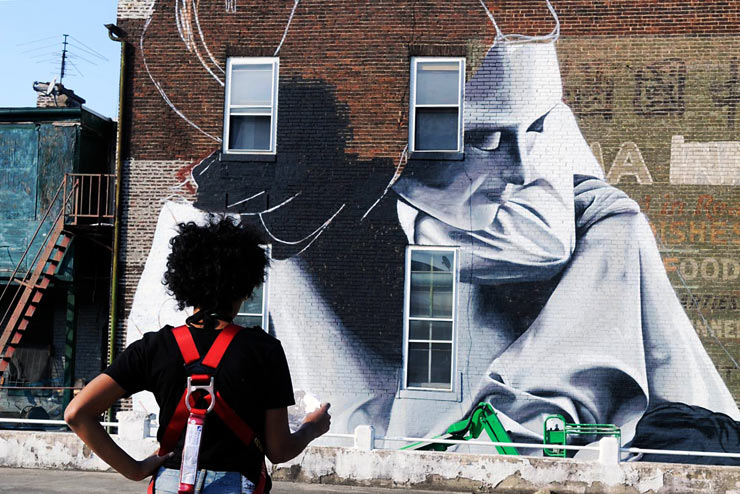 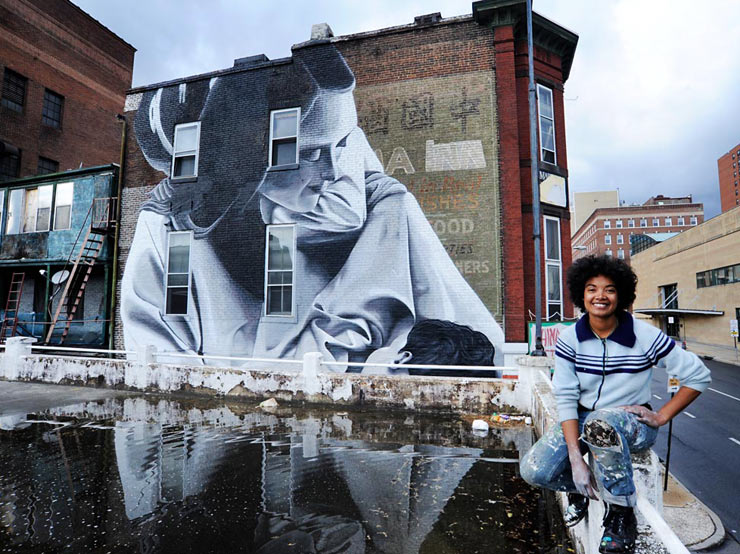 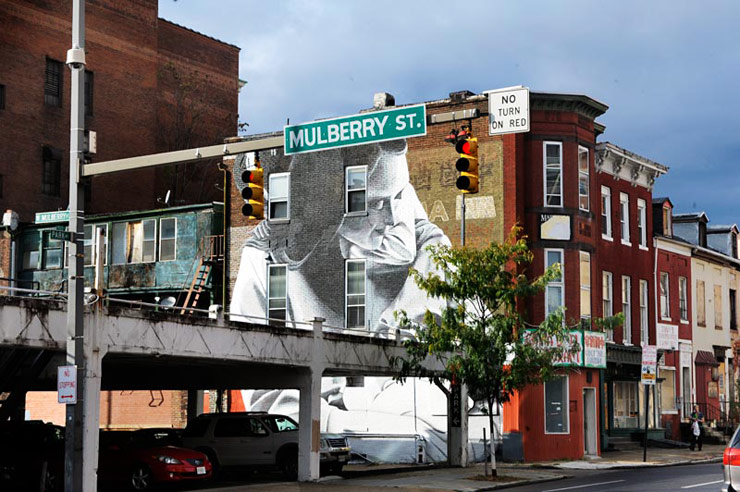 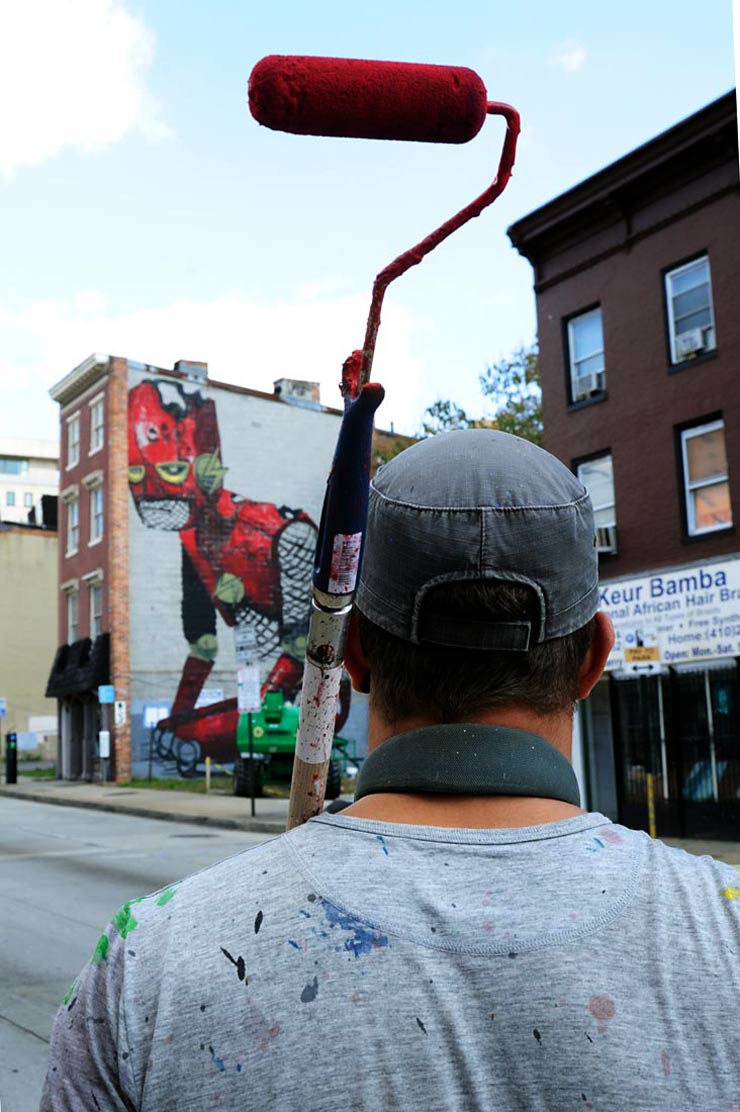 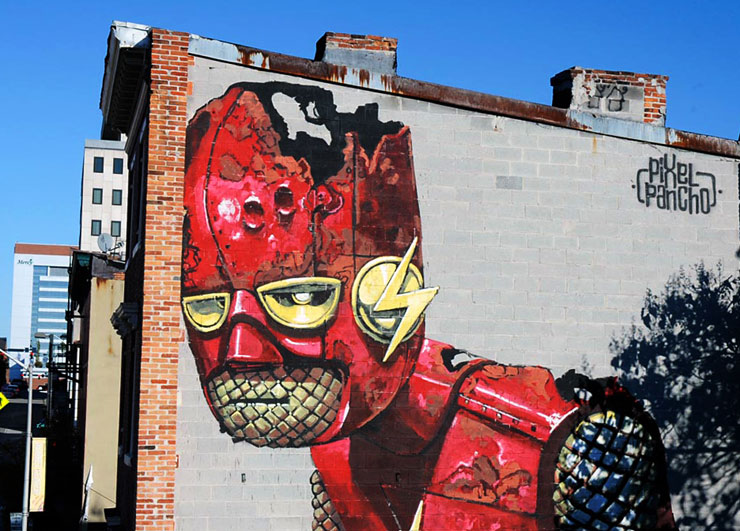 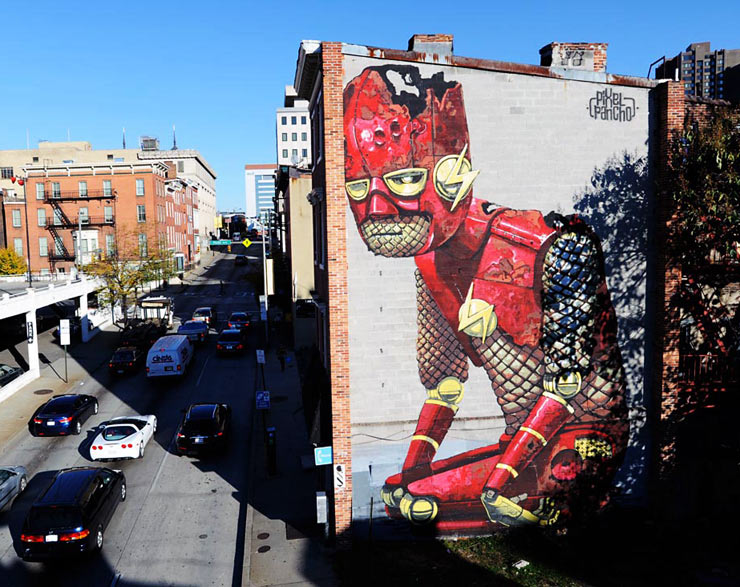 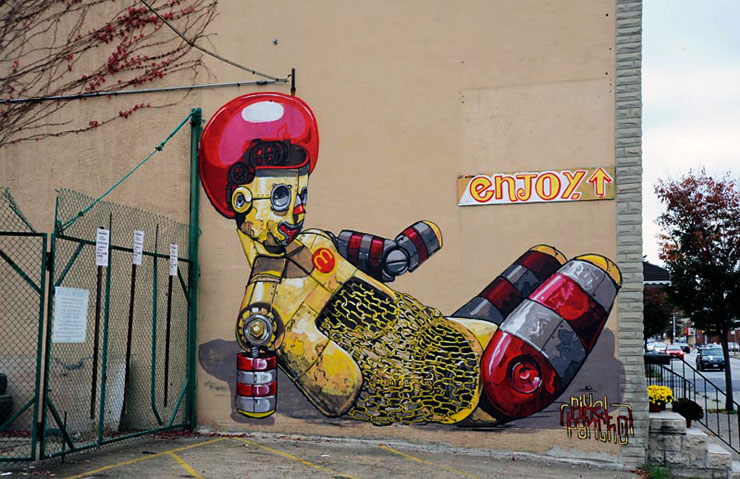 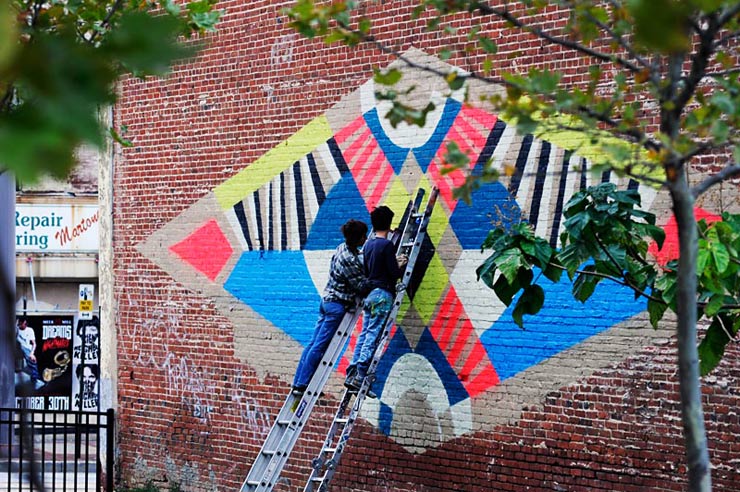 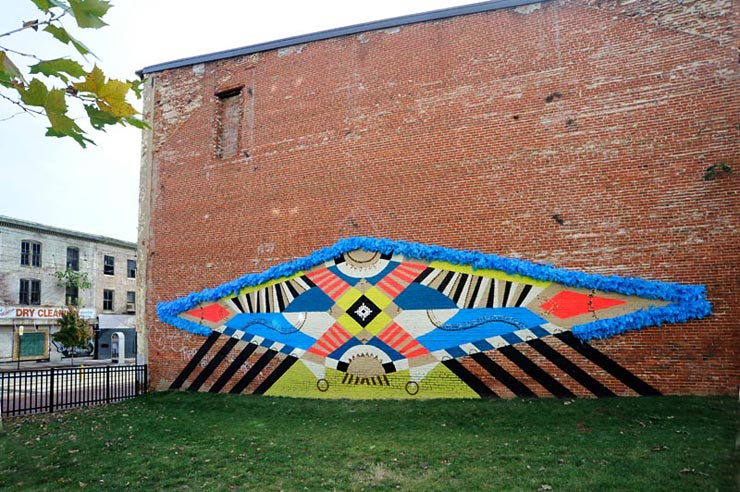 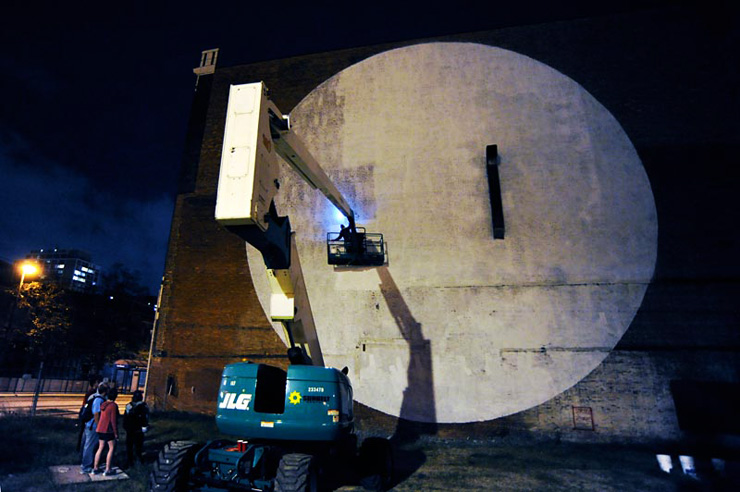 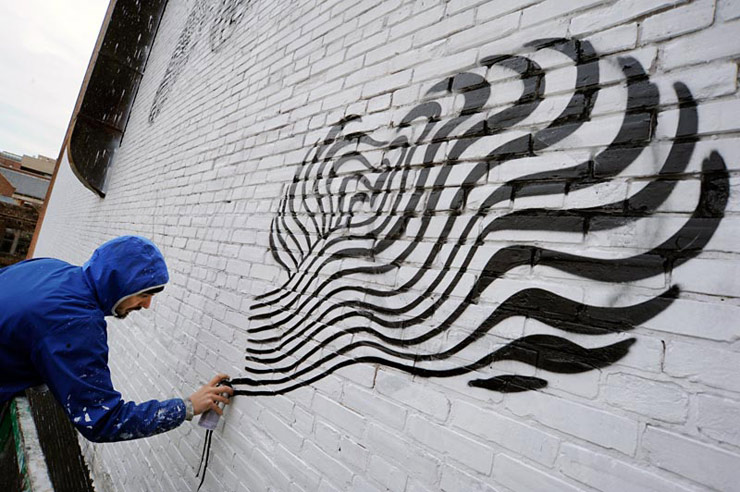 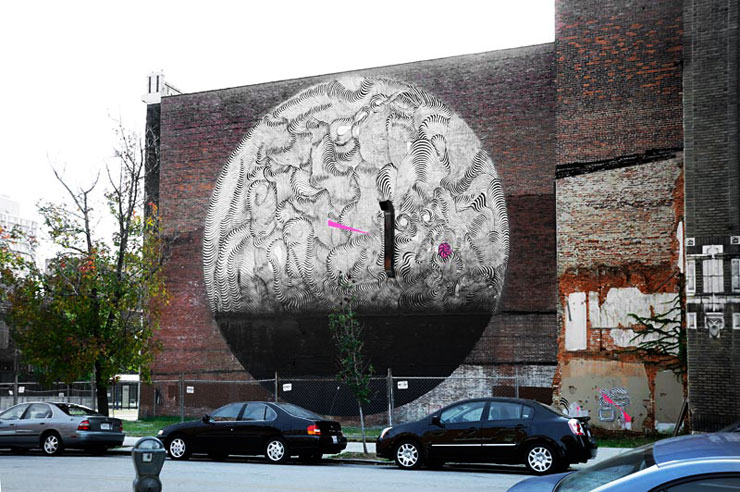 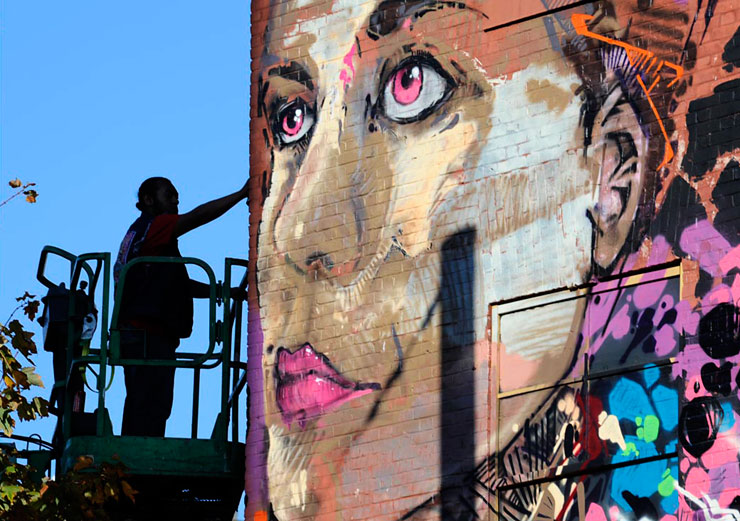 Having pink eye in this case is something good. HKS 181. Articulate, Baltimore 2012 (photo © Martha Cooper) 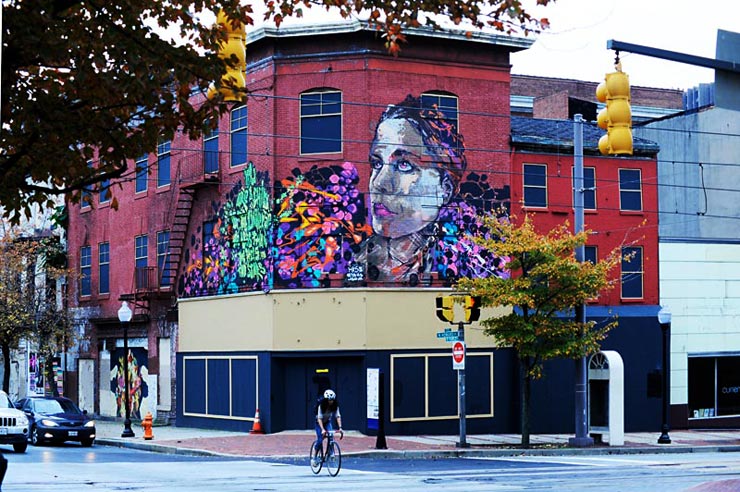 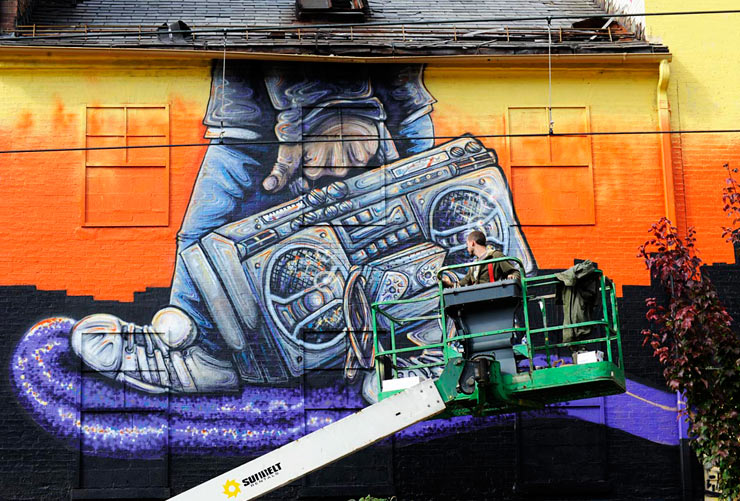 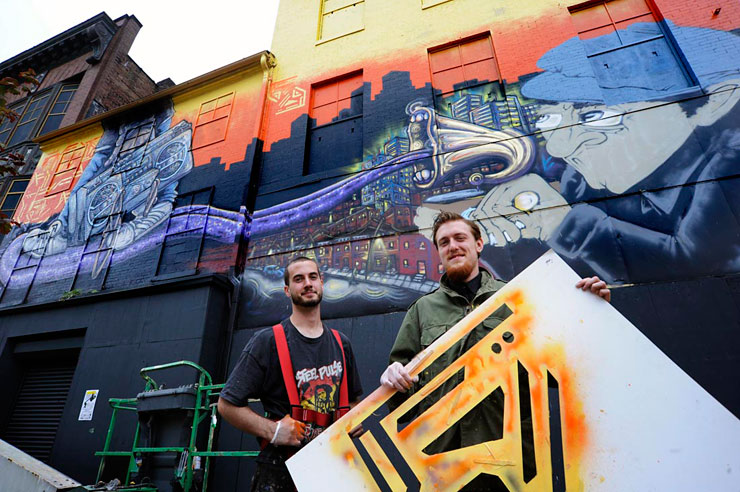 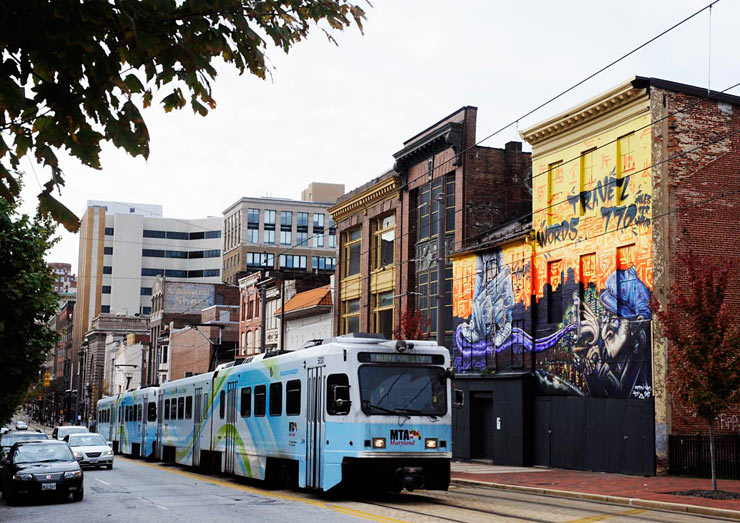 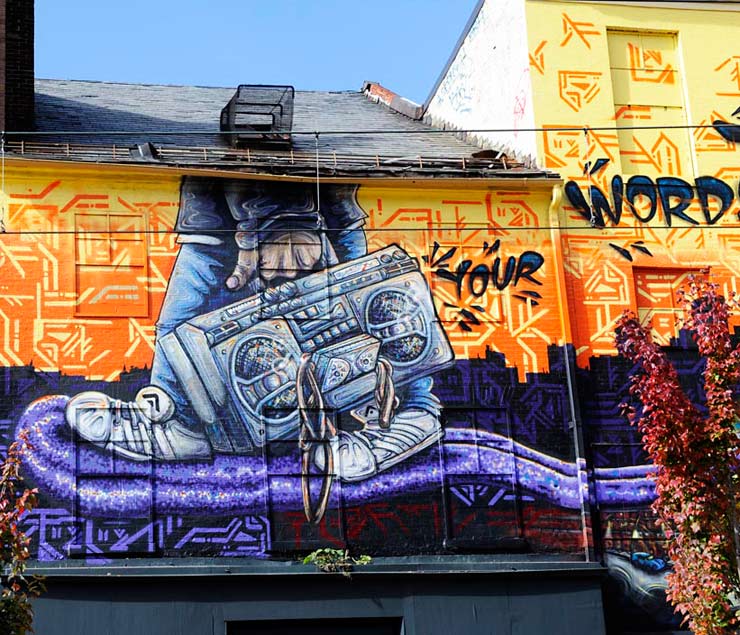 For more information about Articulate Baltimore click on the link below: