Who Decides What the Content Is on These “Street Art” Walls?

There has been a lot of discussion among Street Artists recently about the rise in the number of permissioned/commissioned walls that people are getting up on. Not strictly regarded as Street Art by some once it crosses over onto legal walls, an increasing number of graffiti and Street Artists are choosing to create on slabs of edifice by permission from private landlords and as part of festivals, fairs, or business improvement districts all over the world.

You could see this coming of course – the evolution of perceptions about Street Art and graffiti can be traced to many changes in society, but we won’t enumerate them here today. Suffice to say there is growing evidence that the public fascination and embrace of the scene is fueling a growth of legal walls in cities across the globe.

People who like this development say that it is good that Street Artists are getting an opportunity to develop their work with the luxury of time and without looking over their shoulder, even if it takes away from the “rebel” cache that may be attached to a traditional under cover hit-and-run technique. But a few more critical voices on and off the scene are positing that some of the actual work produced is getting sort of dull and decorative.

We know from experience from providing many artists the opportunity to get up on a legal wall that  sometimes a landlord will grant permission on the condition that certain restrictions apply. Often they relate to things like nudity, profanity, local neighbors opinions, even certain points of view. Other times they want the artist to include a shout-out to them, their business, or their nephew’s favorite superhero. In one way or another, the complete unfettered artistic freedom of the artist is almost always tempered by these considerations. 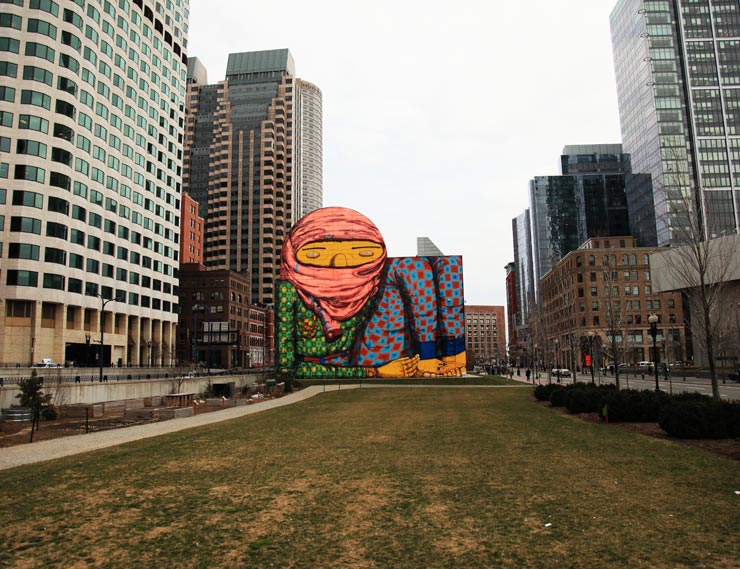 Os Gemeos “The Giant of Boston” at The Rose Kennedy Greenway at Dewey Square Boston. 2012. Click here to read our coverage of this installation on the Huffington Post. (photo © Jaime Rojo)

It reminds us of Boston last year when Brazillian Street Artist Os Gemeos put up a piece by permission in  a prominent location in the city in conjunction with a solo show they had at Boston ICA. Not exactly Street Art? Clearly, it would be better described as a mural on a public piece of real estate. But the vetting process for approving the content was criticized, and the character depicted in the final piece set off a brief firestorm of hysteria that most dismissed as racist rantings, but some took their opinions seriously enough to demand it be taken down. It’s still up by the way.

We’ve seen ‘Public Art” applications from city agencies that are so laborious and convoluted and include so many cooks in the kitchen that you are virtually assured that the final product will be a painting of a flower or smiley face. This is probably why many Street Artist will continue to seek walls of abandoned buildings and dingy doorways, even while doing the occasional permissioned wall.

Which leads us to todays bit of blog-spotting that we bring you from Marni Soupcoff on Huffington Post Canada who poses the question “If the Public Owns the Wall, Does It Get a Say in the Pictures?” Managing Editor for Blogs and 4th generation Torontonian, Soupcoff talks to two guys on both sides of that discussion, and asks you to offer yours.

“Who gets to decide exactly what form the art will take? Should the public — the owners of the property — have a say? The government? Those who live and work in the area? Or is that interfering in the artistic process and getting in the way of the artist’s creativity? Do we want government dictating art?” – read more here.