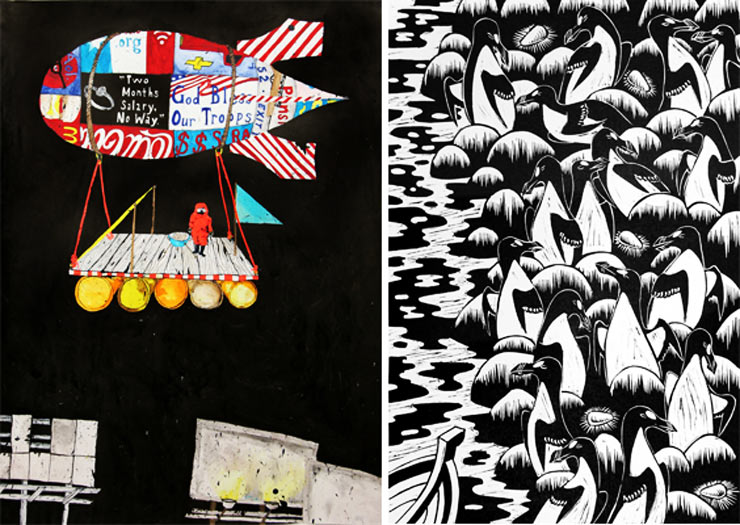 Justseeds Sowing the Seeds of Love
Opening Reception: Friday December 7th, 7-9 pm
Exhibition runs December 7-23, 2012
‘Sowing the Seeds of Love’ by collective group, Justseeds, is the newest exhibition in conjunction with Munch Gallery. Each artist has created a unique piece specifically for the gallery, and all original work will be accompanied by limited edition work. The exhibition will also include a site-specific collaborative mural. We are excited to present the first Justseeds group exhibition in New York City.
Artists include:
Jesus Barraza, Kevin Caplicki, Melanie Cervantes, Santiago Doesntsitstill, Alec Dunn, Molly J Fair, Thea Gahr, Nicolas Lampert, Josh MacPhee, Fernando Marti, Colin Matthes, Dylan Miner, Roger Peet, Jesse Purcell, Pete Railand, Favianna Rodriguez, Shaun Slifer, Chris Stain, Meredith Stern, Mary Tremonte, Bec Young.
Justseeds is a union of 24 artists, who bring together their individualistic opinions to collectively establish a certain perspective on their worldly views. Justseeds continues to collaborate with artists and other collectives from around the world, and the artwork is a forward attempt in discovering the issues and compliances of the human spirit in this world.
Founded in 1998, and originally the graphics distribution project of Josh MacPhee, Justseeds made the transformation into a worker-owned cooperative in 2007 – the original network being largely in place through past collaborations and friendships. In May 2010, Justseeds moved their distribution center from Portland to a new and larger base in Pittsburgh. Justseeds is a conglomerate of creative minds, whose artwork offers viewpoints on different social, environmental and political stances.
——————————
Munch Gallery
245 Broome Street (between Orchard and Ludlow Streets)
New York, NY 10002
212.228.1600
info@munchgallery.com
www.munchgallery.com
Wednesday through saturday 12-7 pm
Sunday 1-6 pm
And by appointment
Subway: F or M to Delancey/Essex Street or D to Grand Street

How & Nosm Studio Confessions
It is an age of self-discovery, and the twins continue to be surprised by what they find as they attack huge walls with zeal and precision in New York, LA, Miami, Stavanger, Prague, Las Vegas, Rochest...
BSA Film Friday 09.20.19
Our weekly focus on the moving image and art in the streets. And other oddities. Now screening : 1. "REWILD" from Escif2. Guido van Helten in Faulkton, South Dakota by Brian Siskind3. How Art...
INTI: "A Pale Blue Dot" in Grenoble
Muralist Inti finished a metaphorical mastery in Grenoble, France last month that helps us to put ourselves in perspective, remembering that in the system of planets we reside in, the earth is just o...
BSA’s 10 Top Pieces on The Streets 2019: A “Social” Survey
The moment you think you understand the street is the moment you begin to lose touch. Behavior on social media is also about as reliable as your Uncle Oscar after he's had a few too many frosted rum ...
Elfo says "Elite: R.I.P. in 2020" on Walls of Verona
“The reports of my death are greatly exaggerated.” That’s the text of a cable sent by the writer Mark Twain from London to the press in the United States after his obituary had been mistakenly pu...
Alec Dunn Bec Young Brooklyn Street Art Chris Stain Colin Matthes Dylan Miner Favianna Rodriguez Fernando Marti Jesse Purcell Josh MacPhee Kevin Caplicki Manhattan Mary Tremonte Melanie Cervantes Meredith Stern MJesus Barraza Molly J Fair Nicolas Lampert NYC Pete Railand Roger Peet Santiago Doesntsitstill Shaun Slifer Thea Gahr