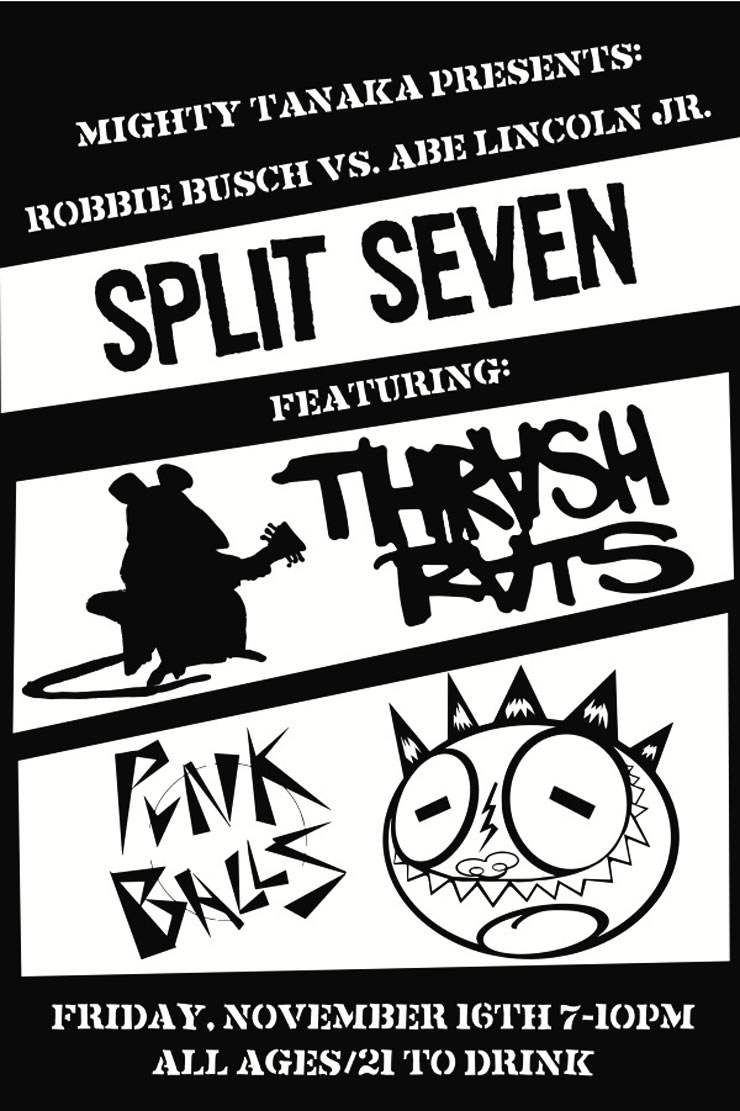 After the music dies down and the lights come up, an energy and excitement lingers in the air.  With a ringing in the ears and a vibration throughout the body, an awesome gig has come to an end.  As the bouncers try to corral the audience from the venue floor and out into the night, it’s imperative to stop and check out all the treasures to be found at the band merchandise table.  From the tour dates t-shirt to the rare vinyl pressings, the experience of seeing an extraordinary concert can be relived for years to come through the iconic wares.  Mighty Tanaka is pleased to bring you our next show, Split Seven, featuring the artistic pile driving power chords of Abe Lincoln Jr. and the wall to wall, mosh pit madness of Robbie Busch.  Together, these two artists have created a cacophony of faux musical mayhem through the unique recreation of a band merch table.

Split Seven is a fictitious rock n’ roll experience with both Abe Lincoln Jr. & Robbie Busch producing fabricated albums from invented Punk Rock and Heavy Metal bands.  This dual creative interpretation brings together various artistic elements of two opposing types of iconoclast music while juxtaposing their individual styles and influences.  Together, they build a virtual band experience, highlighting the various artistic qualities of both genres, without ever producing a single note of music.

Abe Lincoln Jr. & Robbie Busch explore a number of techniques in order to create an epic rendition of their chosen music style, which includes elements of stickers, stencils, paintings and laser cuts.  Split Seven invites the viewer to engage in this mock battle of the bands while choosing once and for all: Punk Rock or Heavy Metal.

Scenes From a Spanish Restaurant : The Culinary Delicacies of DavidL
Barcelona Street Art may have been booted from many streets a few years ago during a period of commercial fueled gentrification but that organic scene sparked a generation of talents who continue to t...
Barcelona Dispatch : A Street Art Survey From a Fan
By his own account Lluís Olivé has been shooting images in the city of Barcelona for about 50 years; street scenes, demonstrations, parades, architectural details, tiles, iron work, doors, doorknobs, ...
Shai Dahan & His Big Red Dala Horse Run Into Manhattan
Artist, Street Art festival curator, now muralist. Shai Dahan has hel a number of roles related to the graffiti and Street Art scene since his teens. Born in Haifa, raised in LA, Dahan lived shortly ...
13 from 2013 : Jessica Stewart "The Roman Nun and the Spray Can"
Happy Holidays to all you stupendous and talented and charming BSA readers! We thank you from the bottom of our socks for your support this year. The best way we can think of to celebrate and comm...
A Mural Jam and Censorship: Fighting for Freedom Of Expression In Barcelona - Part III
In the US, families of military veterans say, "Freedom isn't free." It refers to the enormous amount of sacrifice people have to make - military and civilians alike - to guarantee that societies prov...
Abe Lincoln Jr. Brooklyn Brooklyn Street Art Mighty Tanaka Gallery NYC Robbie Busch