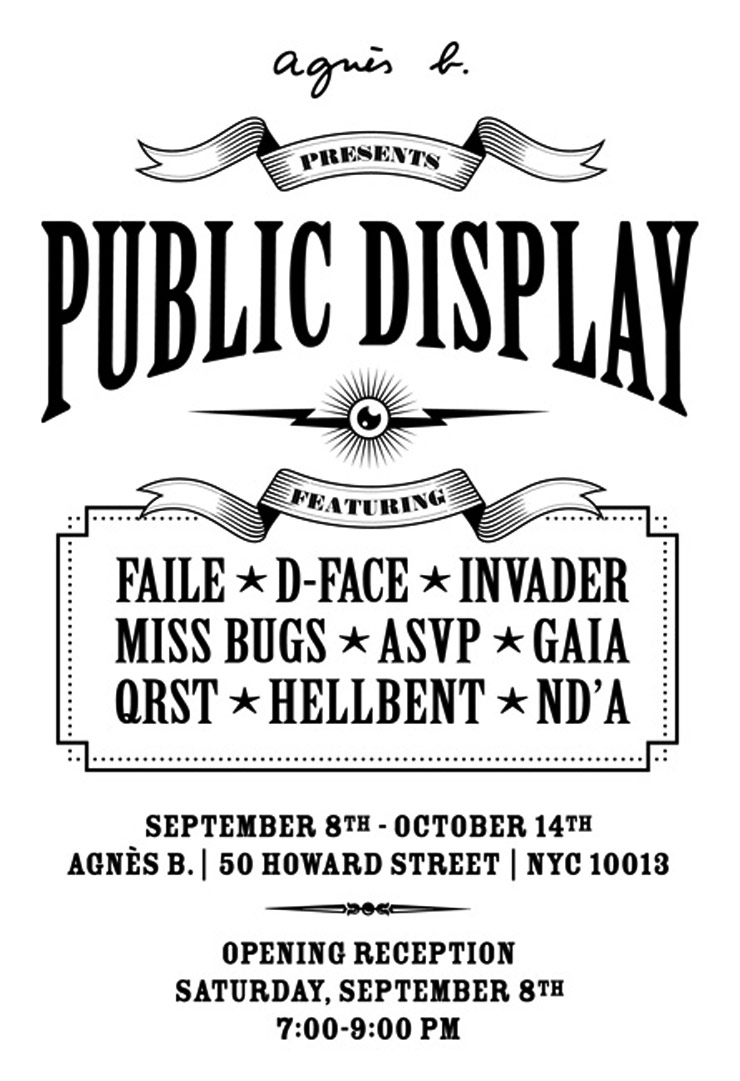 AGNèS B. PRESENTS: PUBLIC DISPLAY
A GROUP SHOW THAT LIVES SOMEWHERE BETWEEN DISNEYLAND AND PEEP WORLD.

Inspired by graffiti and street art, agnès b. has been taking pictures of artworks in the streets of her native Paris, Manhattan and Brooklyn for many years. This is how she first noticed works by ASVP and was intrigued and compelled to work with the duo. The exhibition will feature some well known names from the Street Art world as well as a number of up-and-coming artists that are showing strong promise with collectors and critics alike.

ASVP began working together in 2007. Since then, the team of two has created paintings, murals and poster art that has been displayed in major cities worldwide including: London, Hong Kong, Amsterdam, Zürich, Chicago, Detroit, Los Angeles, Las Vegas, San Francisco, Varanasi India, Florence Italy, Istanbul as well as New York City. The duo’s work often marries eastern and western imagery from multiple influences including retro advertising, pop and comic book culture, often mixed with bold typographic elements. The team’s dramatic multi-layered compositions regularly include bright tones of pop inspired color. In addition to curating Public Display, ASVP is currently collaborating with Agnès B. on an number of projects scheduled to release in 2013. ASVP was recently selected as one of only two emerging artists to be included in Doyle New York’s Inagural Street Art Auction scheduled for October 16th, 2012.

D*Face a.k.a Dean Stockton, grew up in London and had a childhood interest in graffiti. He credits this to Hanry Chalfant’s coverage of New York subway graffiti in Spraycan Art and Subway Art. His humorous and nihilistic work brings together the generation who don’t give a fuck. It fuses both traditional and contemporary graffiti, independent comic book art and good old-fashioned vandalism. D*Face is best-known for putting up hundreds of provocatively ‘defaced’ ten and twenty pound notes. Working with a variety of mediums and techniques, D*Face uses a family of dysfunctional characters to satirize and hold to ransom all that falls into their grasp a welcome jolt of subversion in today’s media-saturated environment. D*Face held his first major London solo exhibition, Death & Glory, at the Stolenspace gallery, followed by an exhibition at Eyecons, at O Contemporary in Brighton. In 2010, he collaborated with Christina Aguilera, on her album cover of Bionic.

FAILE is a Brooklyn-based artistic collaboration between Patrick McNeil and Patrick Miller. Since its inception in 1999, FAILE is known for their pioneering use of wheatpasting and stenciling in the increasingly established arena of street art, and for their explorations of duality through a fragmented style of appropriation and collage. FAILE adapted its signature mass culture-driven iconography to a wide array of media. Their work has been included in numerous exhibitions around the world at the Museum Hetdomein, Sittard, Netherlands, TATE Modern, London, UK, Break Beat Science Showroom, Tokyo, Japan, NeurotitamHausSchwarzenberg, Berlin, Germany. Their works were also featured in numerous solo exhibitions at Perry Rubenstein Gallery, New York, NY, LilianBaylis School-Lazarides Gallery, London, UK, to name only a few.

Gaia currently lives in Baltimore and was born in 1988 in New York City. His name derives from the Greek designation for ‘earth
goddess’. He uses animal imagery to underscore his interest in bringing nature to the urban landscapes. A rising star in the street art community, his work can be found pasted from Brooklyn to Europe and back. According to the artist himself, much of his early work was inspired by a sense of looming environmental calamity. In 2011, he stated; “I want to express this strange un-locatable feeling of fear about the end of the world –
my generation’s zeitgeist of global warming.” He uses a very large scale to depict his subjects and always captures delicate emotion.

Hellbent is a Brooklyn based artist whose work has appeared on the streets of New York for over 7 years. His work has also appeared in major cities across the US and Europe. Although he works in various media (wheat paste, straight spray paint, rollers and stencils) he is predominately known for his hand carved drawings on panels of jawbones, skulls, and various animals ranging from attacking snakes and dogs to serene hummingbirds affixed to any wooden surface. These “plaques” as he calls them always include his signature stenciled floral backgrounds.

Invader is a French street artist who pastes characters from and inspired by the Space Invaders video game, made up of small colored square tiles that form a mosaic. He does this in cities across the world, then documents this as an “Invasion”, with books and maps of where to find each invader. Invader started this project in 1998 with the invasion of Paris – the city where he lives and the most invaded city to date – and then spread the invasion to 31 other cities in France. Cities around the globe now invaded with his colorful characters in mosaic tiles. Since 2000 Invader has shown in many galleries, art centers and museums, from the 6th Lyon contemporary art biennale (2001), the MAMA Gallery in Rotterdam (2002), at the Paris based Magda Danysz Gallery (2003), at the Borusan Center for Culture and Arts in Istanbul, Subliminal Projects in Los Angeles (2004).
In 2010, he was one of the featured artists in the Banksy film Exit Through the Gift Shop. In 2011, he took part in the exhibition “Art in the Streets” at The Geffen Contemporary at MOCA curated by Jeffrey Deitch.

Miss Bugs is a creative U.K. street art partnership from Bristol. Formed in 2007, the duo is a working collaboration between Missum and Bug. Their part-photo collage, part-art statements are big, graphic and visually inspiring artworks and stunning limited edition prints, each hand finished by Miss Bugs with a wide range of materials including gold leaf, ink, aerosol and even magazine cuttings. Miss Bugs prints include dark and humorous themes, mixing religion with pornography and taking a swipe at the established art world (most recently Damien Hirst). They use iconic symbols such as Bugs Bunny, He-Man, Wonder Woman or King Kong re-mixed to represent a personal idea or cultural stance. Miss Bugs is well known within the street art scene and with recent exhibitions in New York at the Brooklyn Nite Gallery in 2011 and at ink-d Gallery in Brighton, UK they are a creative force turning street art on it’s head.

ND’A is a Portland native turned NYC illustrator hit the streets running with a strong and unique style. His heavy-handed brush work and comical characters nestle within many of the forgotten grooves of Brooklyn. Unlike the typical graffiti characters found on the street, his work is like a troubled second cousin. One can’t help but be fascinated and slightly repulsed. Not to say they are grotesque but that they are grotesque, as the word was originally intended to be used.

QRST creates oil paintings and hand-made prints depicting the strange environments and subjects he imagines, and while working out his ideas,
he often makes wheatpastes to further inspire himself and share his process with the public. QRST’s public work often includes unusual hand-drawn illustrations of playfully tussling rat fights, wide eyed cats, and frumpy birds along with his series of everyday people (sometimes with wings).

Leon Keer Bellows "Dream Big" in Gainesville.
“Dream Big” or go home, champ. We don’t need any half-solutions today. This alligator with a hidden nature revealed in its’ shadow appears quite prepared to bellow and bite in Gainesville, Florida. ...
Downtown Miami for the KOOL KIDS : Juxtapoz Clubhouse 2017
Ahhhhh the sun! The sea! The cigarette butt stuck to my leg from last night. Also, did I wear ONLY this swimsuit and shoes, or did I originally go out with more clothes? Anyway this is Miami and t...
Tuco Wallach: Manimals in the Back Alley and Back Yard
Who's that Raccoon Strumming a Guitar in the Woods? Let's be clear, these are staged photos in an outdoor setting – similar in technique to miniature outside artists such as Joe Iurato and Isaac Co...
JR Goes To The Ballet: Dancing Across the Walls
Street Artist JR has joined the ballet, or at least has become a collaborator with it. Joining a short list of artists associated with the New York City company, and an even shorter list of Street Ar...
YZ Yseult "Empress" Brings More Strong Female Images to the Street
It’s good to see YZ Seult continuing her portraiture of women of African heritage and to see such strong female warrior images being put out on the street for the "Graffeterie Festival" in Uzerche, Fr...
AGNèS B ASVP (New York) Brooklyn Street Art D*Face (London Faile (Brooklyn) FR) Gaia (Baltimore) Hellbent (Brooklyn) Invader (Paris Manhattan Miss Bugs (Bristol ND’A (Brooklyn) NYC QRST (Brooklyn) U.K.