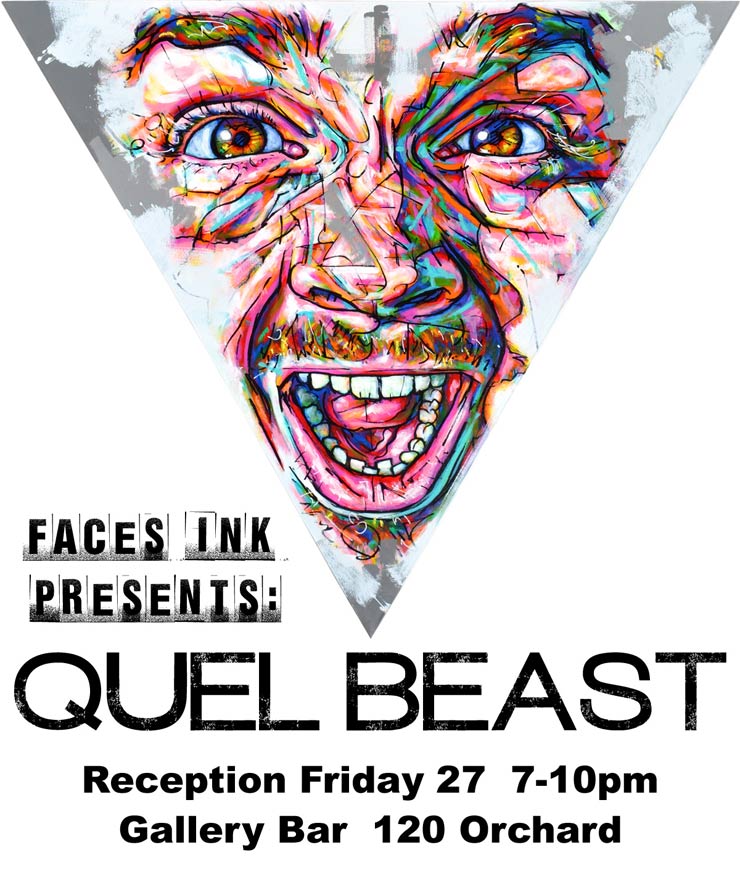 New York street artist Quel Beast will have a reception this Friday the 27th from 7-10pm at Gallery Bar for his large, vibrantly colored portraits.

The influence of New York’s rich street art and graffiti legacy shows up in the bright colors and bold lines Quel Beast uses to bring his faces to life.  A central theme of these portraits has been the emotional turmoil of struggling New Yorkers, but recently Quel Beast has been exploring ways to render the faces we wear when we’re struggling with more than the daily grind.  Almost a year ago Quel Beast began confronting his internal demon of addiction.  The insanity of self-deification and self-destruction, inherent in a life run by self-will, is most evident in his recent “Selfish Portraits”.
Quel Beast learned how to paint by pasting both his failures and successes in the streets of Manhattan and Brooklyn.  He often serves as his own subject, using twisted and wrinkled faces to render portraits that are shifting proportions of joy, frustration, self-obsession and demoralization.  The feelings conveyed through Quel Beast’s vibrant colors and bold expressions would make Chuck Close blush.  This isn’t your mother’s idea of portraiture.
No stranger to struggling in the city, Quel Beast has been sleeping on a friend’s couch while looking for a job.  “I’d much rather make the work I want, than bow to what sells,” he said, “I have friends who show in Chelsea that are just as poor as me; money just isn’t a priority to real artists.”  For these reasons, Quel Beast has priced all of his work in this exhibition well under $1,000.  “Only  collectors and gallerists worry about an artist’s monetary worth,” Quel Beast quipped, “I only worry about being able to afford my next round of supplies.”
The work will be on view this weekend and during the reception.
Gallery Bar is located at 120 Orchard St. on the Lower East Side of Manhattan.

BSA Film Friday: 04.01.22
Our weekly focus on the moving image and art in the streets. And other oddities. Now screening:1. ERWTJE83 turn to Spray Daily's Black Lines2. Ai Weiwei "Turandot", His Version 3. Gold Digger...
Henry Chalfant: Art vs. Transit, 1977-1987 Opens at Bronx Museum
It wasn’t a fait accompli that Henry Chalfant was going to capture an entire graffiti train in late 1970s New York. He needed to devise a technique and plan his attack. In much the same way t...
El Raval In Barcelona: A Magnet Of Small Treasures
Las Ramblas is a good place for rambling foot tours on a Saturday afternoon before reaching the ocean at El Raval. This neighborhood of Barcelona champions the small one-off Street Art piece - the ant...
Parees Festival Marks 3rd Edition in Oviedo, Spain.
The color palette of the new collection of murals at the 3rd edition of Parees Festival is softened, earthen, stable. Adding five new murals brings the total to 23 here in Oviedo The 3rd edition of P...
Who is That Masked King? Olek and Virginia MOCA Disrobe Neptune
Troubled waters here just off Virginia Beach as the tourist season kicks into high gear and families spend the day collecting seashells and the random plastic bottle cap that washes up on the sand. ...
Brooklyn Street Art Gallery Bar Manhattan NYC Quel Beast