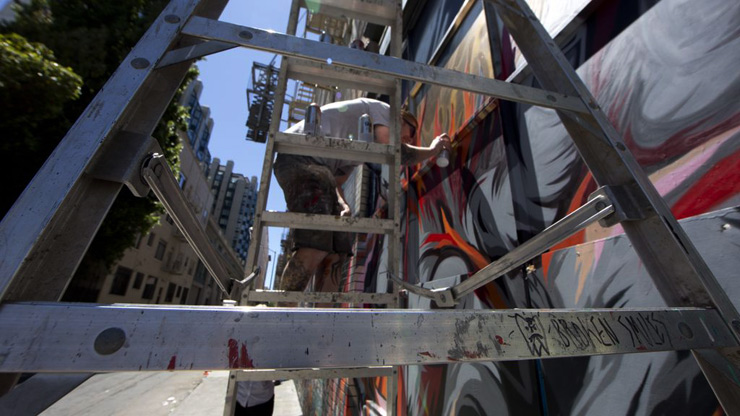 White Walls Presents: “Truth in Myth,” New Work by Meggs
White Walls is pleased to present “Truth in Myth,” a solo exhibition from Australian artist Meggs. The opening reception will be Saturday, July 14th, from 7-11pm, and the exhibition is free and open to the public for viewing through August 4th, 2012. Mythology tells the stories of gods, heroes, humans and supernatural beings as the personification of natural phenomena and more importantly the human condition. In traditional folklore, a myth tells a story that is designed to explain certain ideals, practices and behaviors within society. Following from his interest in superheroes and
comic book narratives, Meggs delves deeper into the subject of fantasy to explore characters and stories from older mythological tales through the morals, dualities and emotions that these superhuman characters represent. Fusing elements of contemporary superheroes to ancient mythological beings, “Truth in Myth” is a collection of new paintings, collage, sculpture and mixed media artworks that expressively reference classic renaissance composition and contemporary pop culture. The layered and detailed works of “Truth in Myth” serve as a continuation of the artist’s search for balance in the understanding of physical and ideological duality of self. “We live in the stories we tell ourselves. In a secular, scientific rational culture lacking in any convincing spiritual leadership, superhero stories speak loudly and boldly to our greatest fears, deepest longings and highest aspirations… the best superhero stories deal directly with mythic elements of the human condition… they help us confront and resolve even the deepest existential crisis. We should listen to what they have to tell us.” – Grant Morrison, Supergods, 2011
Event Information: “Truth in Myth” by Meggs Opening Reception – July 14th, 2012, 7-11 pm On View Through August 4th, 2012 @ White Walls (www.whitewallssf.com) 835 Larkin St, San Francisco, CA

"Change" A Short Film By Doug Gillen in Kosovo
“This is a celebration of them directly,” artist Helen Bur says as she describes her new six-story high painting in Ferizaj, Kosovo. Warm and idiosyncratic, it is a candid photo of local youth whom s...
Martha Picks Some Hits from Pow! Wow! Hawaii (Part I)
Photographer Martha Cooper just returned to New York from Hawaiian paradise and the 5th Pow! Wow! Festival, which this year featured an unprecedented number of artist that some estimate at 100. Natur...
David Walker in Lieusaint, France for "Wall Street Art"
“Wall Street Art”: The merging together of two phrases (Wall Street, Street Art) that never had much to do with each other, but now sometimes do. Additionally it is the newly branded mural program/fe...
BSA Film Friday: 12.06.13
Our weekly focus on the moving image and art in the streets. And other oddities. Now screening : 1. BROKEN FINGAZ "La Fabrica" 2. Half Way To Nowhere with Risk, Insa, Meggs, Echo and ...
Various & Gould Spark a Witch Hunt on Streets of Berlin
Witches are burned at the stake.  Or hanged, drowned, beheaded. Ask the American Puritans. Of course, demonizing and ostracizing and terrorizing never quite went out of style since those formative ye...
Brooklyn Street Art CA Meggs San Francisco Whie Walls Gallery