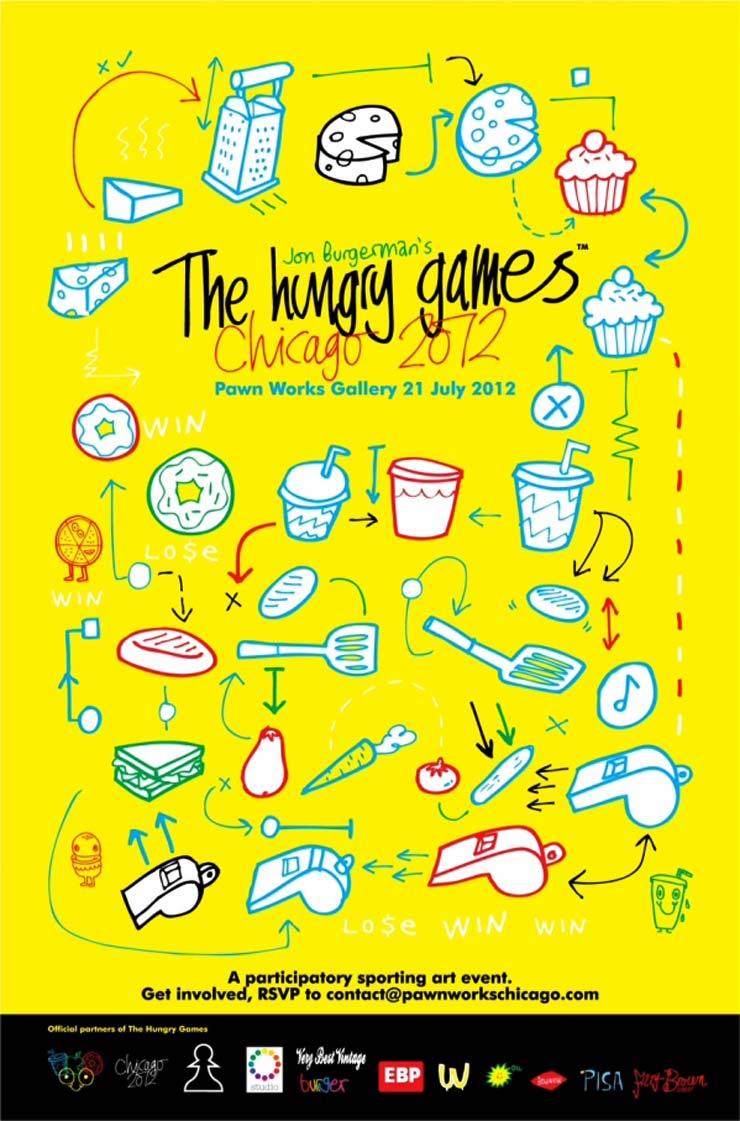 Hungry for Sugar, Fat and Money!

U.K. born artist Jon Burgerman has risen to become a prominent figure in the recent boom of practitioners who traverse the disciplines of contemporary art, design, illustration and entrepreneurism. His award winning work can be seen globally from gallery and bedroom walls to cinema and iPhone screens. A sense of British self-deprecation, dry humour and modern-day anxiety imbues his work along with an enthusiasm for salad.

Four years ago Burgerman applied to tender for a job for ‘a large sporting event’ (one which he is not legally allowed to disclose). It involved the devising of a set of mascots. Having designed many variations of mascots, tweaking and adapting them to the feedback of the event organisers after many meetings, presentations and pitches spread over two years, Burgermans work had made it to the final two options. Excited and nervous about the possibility of having his characters chosen for the large sporting event a concern also loomed that the large sporting event would in fact own his work and exploit it for as much financial gain as possible. Whilst away in China, Burgerman received a phone call explaining that his characters had not be chosen.

To soften the blow of not having his art work grace the grand worldwide stage of a large sporting event he has now decided to create his own tiny, localised, sporting event in response, entitled The Hungry Games.

As well as devising a series of artworks, mascots and sundries for the exhibition, Burgerman has invented a collection of sporting activities. Much like the arts, new, young sporting events also need patrons, with sponsorship an integral part of the project. Each event will have its own local sponsor, who will also be represented in the exhibition. The opening night will feature a series of actions that require audience participation, such as The Soda Pop Race, Vegetable Toss Off, Cheese Grating Racing and more.

The artwork surrounding the exhibition will include a series of paintings relating to the events and sponsorships from the likes of The Empty Bottle, Very Best Vintage, Bite Cafe, Color Wheel Studio and more,  referencing popular sporting actions and slogans. Also featured will be merchandise, multiple cut outs and medals designed by the artist.

The Hungry Games, aims to satisfy the viewer in their desire for mascots, commercial tie-ins, collective experience and spectacle, whilst leaving them hungry for more.

The Inauguration will be held on Saturday July 21, 2012 at 6pm sharp with the help of our frineds at The Color Wheel Studio in Chicago’s Wicker Park.  The Opening Ceremonies will continue until 10:00pm and the show will be on display through August at Pawn Works 1050 N. Damen Ave. Chicago, Illinois.

Welling Court 2016 Part II and AD HOC's 10th Anniversary this Weekend
Long before Bushwick Open Studios and the Bushwick Collective there was Ad Hoc Gallery in a part of Brooklyn better known for bullet proof plexi-glass at the corner deli than being any kind of artists...
BSA Images Of The Week: 03.22.15
Can we please not talk about snow? Spring, you temptress. Here's our weekly interview with the street, this week featuring Angelina Christina, Bifido, BiP, Bortusk Leer, C215, Chris Stain, Crum...
BSA Images Of The Week: 11.10.19
Welcome to BSA Images of the Week, baked fresh daily for you from New York, infused naturally with a gritty melange of international flavors. In this city, global IS local. Here’s our weekly i...
Moniker BK 2018 Catalogue Introduction Text by BSA
For the past few days we've been highlighting some of the artists whose brand new works will be debuted this week at Moniker International Art Fair this week. We are pleased that our editor in chi...
Borondo in Kiev Paints Saint Sophia's Cathedral on a Wall
You could call it a mural, this new piece celebrating Saint Sophia’s Cathedral in Kiev. You may also simply refer to it as an outdoor painting of a majestic and Byzantine indoor view. Borondo for S...
Brooklyn Street Art Chicago ILL Jon Burgerman Pawn Works Gallery