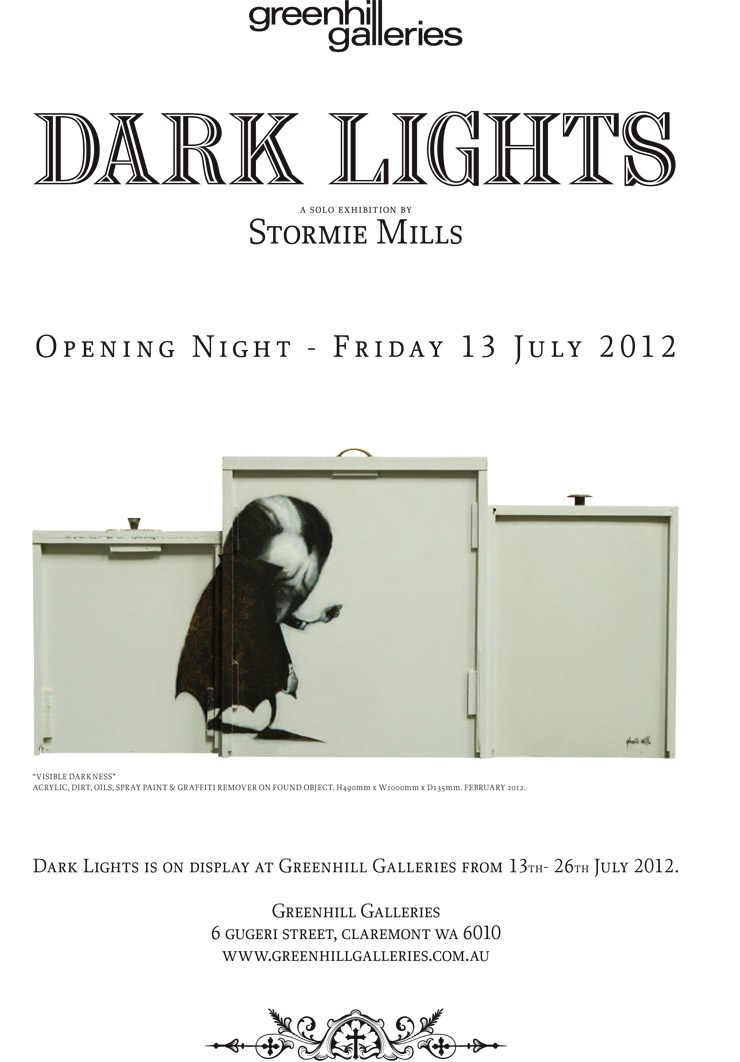 By shining a light into the darkness his work seeks to uncover what lies beneath in each of us.

Dark Lights explores the idea that a “villain” in society can still possess a captivating human quality when the light is shined within them.

By contrast a pillar of society exposes their “dark side” as they stand still under the light.

Stormie mills began painting in 1984. the first mark on the world began on a dark wet night that fuelled the relentless all consuming passion to create an image.

More than 25 years later stormie has more than made a mark in the global context as a highly collectable artist that has seen him travel around the world producing large scale commissions and transforming the concrete landscape in barcelona, greece, london, los angeles, miami, melbourne, new york, perth, sydney and tokyo.

Using a combination of acrylic, dirt, spray paint and graffiti remover and working predominately in a palate of black, grey, silver and white. stormie has crossed many boundaries of painting from, 40 metre scaffold facades on buildings, to inside discarded draws, to the tiniest detail on a fallen leaf and to the finest of belgium linen.

In between painting stormie dedicates time to giving back to the community often speaking to students in schools as well as presenting to formal forums. in may, stormie was invited to present at the agideas international design week, one of the largest and most prestigious design festivals in the world.

Stormie’s work reflects a deeply personal expression of emotion motivated by the notion of isolation. each work is a communication of the human condition engaging the viewer to explore beyond the image on the surface. each work stormie creates is compelling and continues to attract collectors for his unique statements on life.

Dark Lights is on display at greenhill galleries from 13th- 26th july 2012.