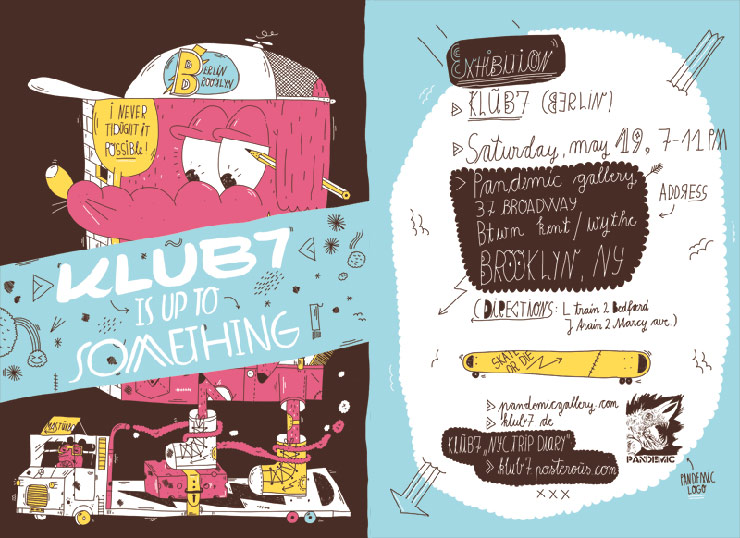 KLUB7 ART COLLECTIVE
The Berlin, Germany based art collective KLUB7 is creating art on various surfaces, making murals, customizations and illustrations throughout the world. Together they developed a collective trademark style that combines the diverse backgrounds of the six members. KLUB7 has been around for more than 10 years. Born out of the graffiti scene in the east of Germany, this collective has undergone an amazing transformation. Since the group’s inception, all five men and its one female member have entered their 30s and developed a very diverse range of activities, that leaves the collective creation of graffiti art behind, although they have not completely renounced those roots. From the subculture of urban art to projects under legal conditions KLUB7 has progressively and continuously expanded its network. Alongside, Berlin as a melting pot and a centre for contemporary art has become their home – and it demands as much as it supports.
The fact that KLUB7 uses chalk, appear to be a tricky consequence on unfriendly experiences. Increased surveillance, fines and numerous campaigns against tagging and other media, including posters, stickers and stencils, have seen a real boom in developed countries. Official advertizing campaigns trying to avoid juristic debates or even punishment with using chalk spray. This should feel and look like rebellion without being subject to criminal charges. KLUB7 is motivated for other reasons in using chalk. They work on walls and the ground. First of all, this simple drawing and painting material is easy available and seems particularly fit for spontaneous artistic interactions. Most often, their activities involve children as well as the adult public in a sort of “jam session” that expands the view of graffiti art to an acceptable public act.
PANDEMIC gallery
37 Broadway btwn Kent and Wythe
Brooklyn, NY 11211
www.pandemicgallery.com
Gallery hours:
Tues.-Fri. 11-6pm
Sat. & Sun. 12-7pm
closed Monday

Shepard Fairey and the Future in New York's Little Italy
Before the summer ends New York is still happily awash in myriad public festivals, concerts, street fairs, free Shakespeare in the park, stoop sales, fire hydrant fountains, rooftop parties and of cou...
BÄST, New York Original, In Memoriam
His wit is what we’ll miss the most! BÄST took no statement so seriously that he couldn’t satirize it – including ones that came from your mouth. A sweet-faced wiseguy with sartorial style, his illus...
Vermibus x Moniker x BSA
In advance of Moniker in Brooklyn this May, we are interviewing some of the artists who are influenced both by street practice and fine art as the contemporary urban art category continues to evolve...
Trump Rat and Democracy at Jeffrey Deitch "Protest Factory"
Halloween comes to a close after what seemed like a week-long series of events and celebrations thanks to it occurring on Wednesday and no one knowing when to have a party or go trick or treating. ...
Bien Urbain 2014 in Besançon, France
Artistic Routes Through and with Public Spaces The month long 4th Edition of Bien Urbain just wrapped in Besançon, France and the results are predictably rather awesome due to the quality of the work...
Brooklyn Brooklyn Street Art Klub7 NYC Pandemic Gallery