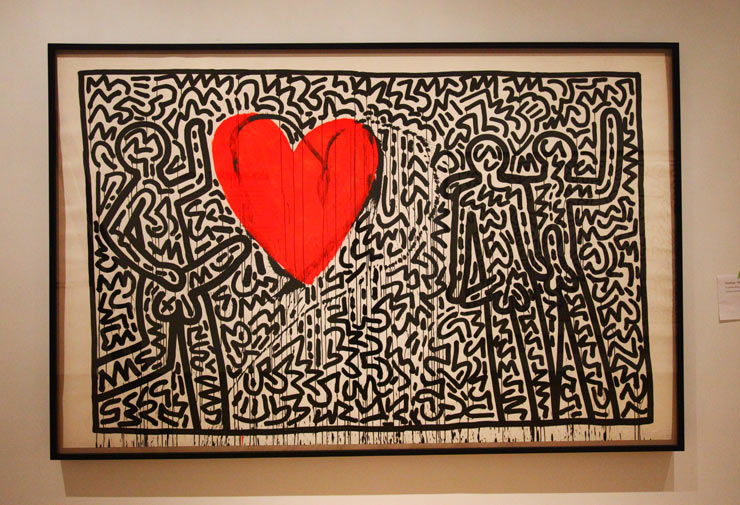 Keith Haring: 1978–1982 is the first large-scale exhibition to explore the early career of one of the best-known American artists of the twentieth century. Tracing the development of Haring’s extraordinary visual vocabulary, the exhibition includes 155 works on paper, numerous experimental videos, and over 150 archival objects, including rarely seen sketchbooks, journals, exhibition flyers, posters, subway drawings, and documentary photographs.

The exhibition chronicles the period in Haring’s career from his arrival in New York City through the years when he started his studio practice and began making public and political art on the city streets. Immersing himself in New York’s downtown culture, he quickly became a fixture on the artistic scene, befriending other artists such as Jean-Michel Basquiat and Kenny Scharf, as well as many of the most innovative cultural figures of the period. The critical role that these relationships played in Haring’s development as a public artist and facilitator of group exhibitions and performances is also explored. Pieces on view include a number of very early works never before seen in public; seven video pieces, including Painting Myself into a Corner (his first video piece) and Tribute to Gloria Vanderbilt; and collages created from cut-up fragments of his own writing, history textbooks, and newspapers.

Keith Haring: 1978–1982 is curated by Raphaela Platow. The exhibition is co-organized by the Contemporary Arts Center, Cincinnati, and the Kunsthalle Wien. The Brooklyn presentation is organized by Tricia Laughlin Bloom, Project Curator, and Patrick Amsellem, former Associate Curator of Photography, Brooklyn Museum.

This exhibition is made possible by Lisa and Dick Cashin with additional support provided by the Stephanie and Tim Ingrassia Contemporary Art Exhibition Fund.

Strøk Windmilling in the Windy City of Hsinchu 新竹市 (Taiwan)
You know how to do windmills right? Here Norway’s Strok brings them to a wall at Hsinchu International Land Art Festival in this Taiwanese city known for being very windy. He’s been experimenting wit...
Madrid Dispatch: Primo Banksy and TVBoy
These days it is the default storyline of a non-British arts journalist to deign that their local street artist is “Tel Aviv’s Banksy”, or “Wanaka’s Banksy”. Here in Madrid, this artist just calls hi...
"No Limit" in Borås, Update 1 : Temporary, Anamorphic David Zinn
No Limits is in it's second year in Borås, Sweden and the mural festival has been a success aside from two days of rain that displaced the travel plans of a number of the artists. Primarily a beauti...
Asbestos Paints a Roof Over His Head in Cork, Ireland
Here in Cork, as in an increasing portion of the western world, housing is gradually turning into a privilege, instead of a right. For the Ardu Street Art Festival in this city of 190,000, the second...
BSA Images Of The Week: 05.17.20 / Dispatch From Isolation # 56
Times are tough but so are you. Such a New York sentiment and at the heart of it we believe in our fellow New Yorkers and people in general to pull through this series of cavalcading catastrop...
Brooklyn Brooklyn Museum Brooklyn Street Art Keith Haring.Keith Haring Foundation NYC