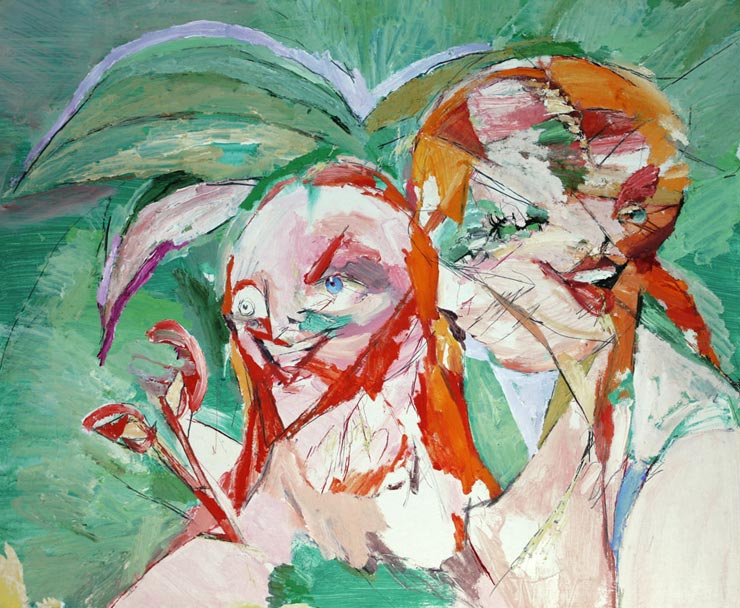 Salome. The voluptuous young princess who performed the seductive dance of the seven veils inflaming King Herod to the point that he would bring John Baptiste’s head in a silver charger. Judith. The beautiful widow who allured the enemy general Holofernes and managed to decapitate him to save her city of Bethulia from the Assyrians. Delilah. The woman who became the object of Samson’s desire and was able to deceive him by making him unveil his deepest secret concerning his immanent great strength.

Ferocious attractive women that cunningly exploit men are drawn out from the cosmos of Jeudo, Christian and ancient Greek mythology and become the central subject matter in Alexandros Vasmoulakis’ new work. Moving from his previous depiction of vigorous and dynamic reclining nudes that sarcastically gaze at the male viewer, the artist once again unleashes the forces that control the conflicting relationship between men and women and enhances the infamous personality of a femme fatale.

Through a colorful mixture of oil, ink and acrylic, Vasmoulakis’ female protagonists are rendered as supernatural creatures. Deities that deviate from images of mere objectification. The artist’s rough brush strokes and abrupt lines intensify their Dionysiac nature, which is playful and humorous, as well as liberating. According to Vasmoulakis, the patterns of a patriarchal society throughout history have been established due to men’s lustful desire and simultaneous fear of women. An issue that reverberates to the mythical association of Eros and Thanatos with the disquieting charm of female beauty.

However, the artist distorts their features, suggesting their physical attractiveness without representing it. He portrays the castrated man, who, disarmed and powerless, witnessed Death and Desire, confessing that this revelation “felt like a kiss”. Once more Vasmoulakis figures become strange amalgams of the past and present that can never be captured and solidified, but somehow perfectly trigger a stream of consciousness of the eternal game between the two sexes.
Elli Paxinou

1 Herode, from Salomé: A Tragedy in One Act by Oscar Wilde

Gallery Nosco presents:
“IT FELT LIKE A KISS”
A Solo Show with
ALEXANDROS VASMOULAKIS

RSVP: lila.benini@gallerynosco.com by the 10th April to be included on the guestlist

BSA Film Friday: 04.22.16
Our weekly focus on the moving image and art in the streets. And other oddities. Now screening : 1.La Pintura. Graffiti Documentary. Trailer 2. Saving Banksy: Trailer 3. Spencer Keeton...
13 from 2013 : Jim Kiernan "Snowden – Eyes Are Watching"
Happy Holidays to all you stupendous and talented and charming BSA readers! We thank you from the bottom of our socks for your support this year. The best way we can think of to celebrate and comm...
Studio Visit with MRKA : Graffiti and Branding
"Graffiti and branding are the same thing; One is legal and one is illegal." BSA Contributor Rosanna Bach visited MRKA for a studio visit and they talked about the intersections of the street, the In...
A "Gentle People" Aussie Tour: Paint, Fun, and Run with 1UP & Olf
It’s almost sublimely subversive to publish your illegal graffiti escapades in a handsomely bound photo book with creamy paper stock and gauzy, professional photos. Positioned as a travelogue across ...
BSA Film Friday: 06.16.17
Now screening : 1. PASSAGE / From Wall to Wall 2. Occupied in Bethlehem - from Fifth Wall TV 3. BYG //12 + 1 // Contorno Urbano // Barcelona 4. 2KM3 Saint-Gervais Mont-Blanc Contemporary Art Plat...
Alexandros Vasmoulakis Brooklyn Street Art Gallery Nosco London U.K.