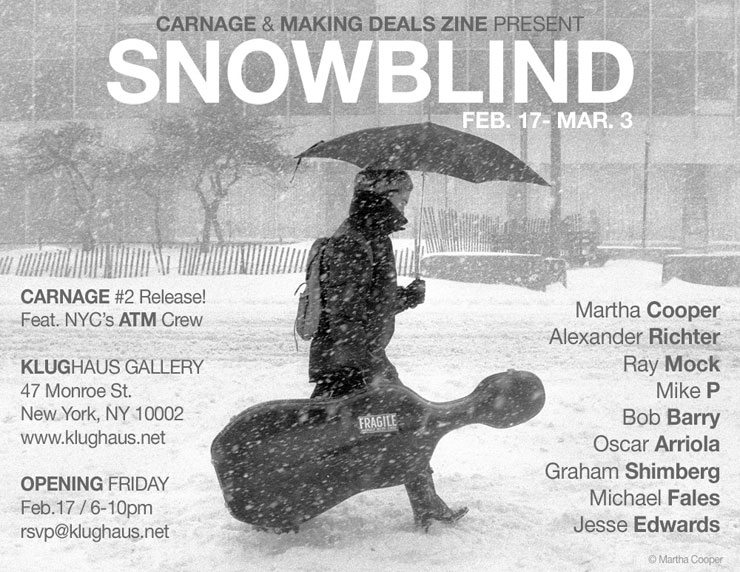 With SNOWBLIND, Klughaus Gallery, in conjunction with Carnage and Making Deals Zine, is proud to present a group of artists who have captured the gritty pleasures of the winter season.

The showʼs opening reception will mark the launch of issue #2 of Carnage, a limited edition zine featuring the prolific and highly distinctive work of New York Cityʼs ATM Crew.

Klughaus Gallery exhibits a variety of contemporary art. The gallery works primarily with artists that have roots in graffiti and street culture and seeks to develop itself as a leader in fostering urban art appreciation within the local (Chinatown/LES) community.

Martha Cooper is a documentary photographer who has specialized in shooting urban vernacular art and architecture for over thirty years. Her work has been exhibited in museums and galleries worldwide and published extensively in magazines from National Geographic to Vibe. Some of her publications include Subway Art, New York State of Mind, Going Postal, and most recently, Tokyo Tattoo 1970.

Ray Mockʼs mission as a photographer is to capture the uncooptable core of city culture and make ugly look pretty. His work has been featured in books, in magazines and on countless websites. He publishes Carnage and likes to hang around trains.

Jesse Edwards is a Seattle based artist who focuses on oil paintings ranging from classic landscapes to more unconventional still-lifes. In addition to his paintings of guns, marijuana plants and graffiti tools, he is known for his pixilated nudes as well as his quality work with ceramics. He has studied at the Cornish School of the Arts and Gage Academy and has exhibited his work throughout the United States in many prominent galleries and museums including Seattleʼs Center on Contemporary Art (CoCA), Woodside/Braseth Gallery, BLVD Gallery, Deitch Projects, The Hole NYC, and The Museum of Sex. Edwards has also been featured in many prestigious publications including the New York Times, Seattle Times, Vice Magazine, Seattle PI, and City Arts Magazine.

Mike P is a New York City based artist who works in a wide range of mediums focusing on painting and illustration. His art can be found in one form or another in many of the places that he has traveled around the world.

Alexander Richter is an NYC based commercial photographer specializing in portraits for editorial, advertising and the music industries. When he is not making pictures, he can be found with his wife in Maine drinking fresh squeezed lemonade and eating lobster rolls.

Michael Fales can be found photographing the streets as the city comes alive in the morning, or exploring itʼs tucked-away nooks. His photos have appeared on numerous websites, books, and exhibitions. He currently resides in Brooklyn with his wife and two cats.

Graham Shimberg is a photographer, track-walker, freight-nerd, and bindle-stiff.
Bob Barry documents graffiti amidst the paranoia and the Disney-fication of a post-9/11 New York.

Oscar Arriola is a Chicago-based photographer who has enjoyed documenting graffiti, city life, tuxedo cats, rogue cops, and artists since the mid-80’s. His photography has been featured in the recent Chicago Street Art book.

BSA Images Of The Week: 05.03.15
We've been seeing an increase in the number of politically charged pieces showing up in the street lately. It is no surprise given the rise in marches and demonstrations and discussions in our c...
BSA Images Of The Week: 03.06.16
Armory Week : The art fairs are happening in NYC and folks are finding new, original and purely derivative ideas from the commercial shows that swarm with fans and lookyloos. The few folks we spok...
WK Interact Makes Some Noise in Tokyo
French New Yorker and Street Artist WK Interact has just finished a new gig on a massive wall in Japan and he is about to help make some noise about it, so to speak. The Japanese band Noisemaker has a...
The Conflicted Wonderings of Wasted Rita at URVANITY ART 2021
Positioned as an ironic truth-teller with a sense of humor, Portuguese visual artist, illustrator, and street Artist Wasted Rita uses her droll texts and lo-fi illustrations to skewer societal and st...
BSA Images Of The Week: 03.15.20
Welcome to BSA Images of the Week! Only two weeks ago we were making jokes here about the NYC plastic bag ban and Coronavirus. Now the city, state, and federal government are in official states of...
Alexander Richter Brooklyn Street Art Graham Shimberg Jesse Edwards Klughause Gallery Manhattan Martha Cooper Michael Fales Mike. P New York City Oscar Arriola Ray Mock