Pongtopia! is presented by Brookfield Office Properties, in partnership
with SPiN Galactic. A dynamic three-day event combining the sport and
art of table tennis with the spirit of charity and education.

Given the recent increase in popularity of America’s favorite pastime,
Brookfield, SPiN and Operation Design are working together to showcase
this popular sport as never before — with world-class pros and
celebrities battling it out, as the New York area’s most amazing players
compete for the Brookfield Cup.

Street artist Billi Kid, of Public Works Department, will curate the
artistic components of the event, an incredible trove of one-of-a-kind
pieces of artwork and a live auction to be held on Thursday, November
3rd. Pongtopia! will display extraordinary, creatively painted Ping-Pong
tables and paddles by high-profile street and graffiti artists. Each
piece of table-tennis art will be available for purchase and proceeds
will go to support creative programs in selected New York City public
schools through Operation Design. 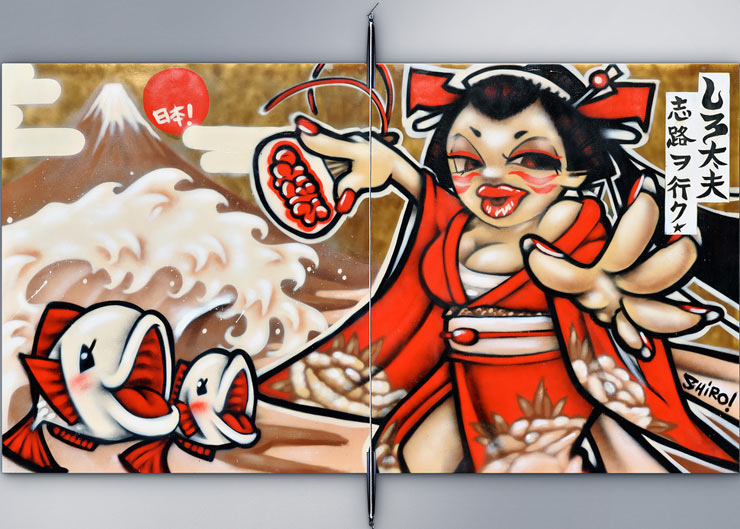 To see images of the complete set of tables and padles click on the link below:

Rafael Schacter Investigates "Street To Studio"
“These are artists who are thus not slavishly reproducing their exterior practice within an interior realm but who are, rather, taking the essence of graffiti – its visual principles, its spatial stru...
BSA HOT LIST: Books For Your Gift Giving 2020
It's that time of the year again! BSA has been publishing our "Hot Lists" and best-of collections for more than 10 years every December. In this year that has been so heavy and difficult for many...
Slap It! Slick Stickers Spread Across City Surfaces Speak and Surprise
Stickers, or slaps, are small but formidable graphic and text messages, especially when massed together on a doorway or light pole. They are also fast and surreptitiously placed, as simple as a gestur...
"Major Minority" ; The Great Gathering of a Tribe
Poesia and EKG Talk to BSA about an Audacious Survey A new show organized by Poesia, a San Francisco based graffiti artist and founder of the site Graffuturism, pulls together one hundred or so art...
Skio and Théo Lopez at Square Henri-Karcher in Paris for Art Azoï
Paris, like many cosmopolitan cities around the world is mostly a pedestrian city – with about 60% of journeys are by foot rather than by car. With this in mind the city's urban planners have been foc...
ART ¹ Billi Kid Blip Brooklyn Street Art Buildmore Cake Carly Ivan Garcia Cern ChrisRWK COL Wallnuts Cope2 CzrVII Dashdoe Dave Warnke DAVID COOPER Dint Wooer Krsna El Celso Elijah Arts Franck de Las Mercedes Frost215 Fumero Geoff Hargadon Ian Ross Indie Jaxiejax Art Jim McHugh Joe Iurato Manhattan Mike Die NohJColey NYC Operation Design Peat Wollaeger Peru Ana Ana Peru Pongtopia! Question Josh? Rednose Sand One Seamo Shiro Street Grapes The Winter Garden Ticky Tock UWP (UnderWaterPirates) VengRWK Zam