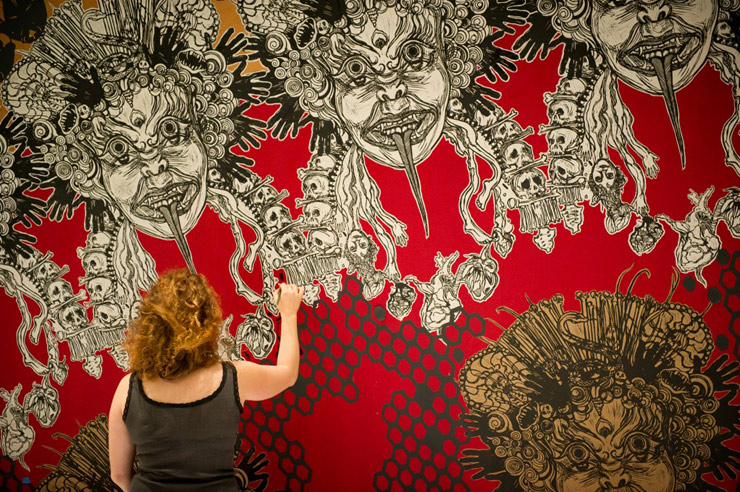 There’s a good chance you’ve encountered Swoon’s work before: her intricately cut, life-sized portraits have covered abandoned buildings and warehouses in cities around the world. Often found in beautiful states of decay, her wheat-pasted installations are populated by realistically rendered people going about everyday activities in a cityscape of her own invention.

In both her art and her own life, Swoon is deeply engaged with social and humanitarian projects. During the 2009 Venice Biennale, she and a crew of 30 other artists and friends sailed SWOON boats made of reclaimed materials through the canals of Venice—creating new purpose out of what was cast aside. Her latest endeavor, the Konbit Shelter Project, is a sustainable building project assisting Haitians who lost their homes in the devastating 2010 earthquake. Working alone or in collaboration, Swoon’s work is often about forming a community in order to practice what she refers to as a “real world” engagement.

For the ICA’s fifth installation of the Sandra and Gerald Fineberg Art Wall, Swoon’s installation will extend from the elevator atrium to the lobby, soaring 40 feet up to the ceiling—the largest installation to occupy the Fineberg Art Wall. The work, titled Anthropocene Extinction, is composed of streams of intricately cut paper which connect key sculptural elements within the installation, including a 400-pound, suspended bamboo sculpture. The exhibition is accompanied by an ICA-produced video featuring installation footage and an interview with the artist.

To find out more about this exhibit, location, time, dates and directions visit ICA site at:

BSA Images Of The Week: 07.29.18
Here’s our weekly interview with the streets, this week featuring 1UP Crew, Amanda Browder, Antennae, City Kitty, Dirt Worship, Dragon76, Jason Naylor, LMNOPI, London Kaye, Makatron, Sheyro, The...
Panmela Castro, Olympic Goddess in Rio for the Games
From Rio, “The Goddess of Victory” by Brazilian artist Panmela Castro on the Boulevard Olímpico. Fresh off her PM/10 mural in front of the under construction Urban Nation in Berlin, Panmela says that ...
Jetsonorama in Hotchkiss : 14 From 2014
Happy Holidays to all of you charming and sparkling BSA readers! It’s been a raucous sleigh ride with you and we thank everyone most sincerely for your support and participation this year. A sort o...
El Sol 25 Mashes Figures on Street Poster Exhibition in The LES
New York Street Artist EL SOL 25 has again delivered a campaign of quality adult illegal Street Art in the city after touring recently through Montreal and the French Quarter in New Orleans. The life-...
Tomek and False Photographed by Sabeth 718
We're counting down the last 12 days of 2012 with Street Art photos chosen by BSA readers. Each one was nominated because it has special meaning to a reader or is simply a great photograph from 2012 t...
Boston Brooklyn Street Art Geoff Hargadon ICA Institute of Contemporay Art Mass Swoon