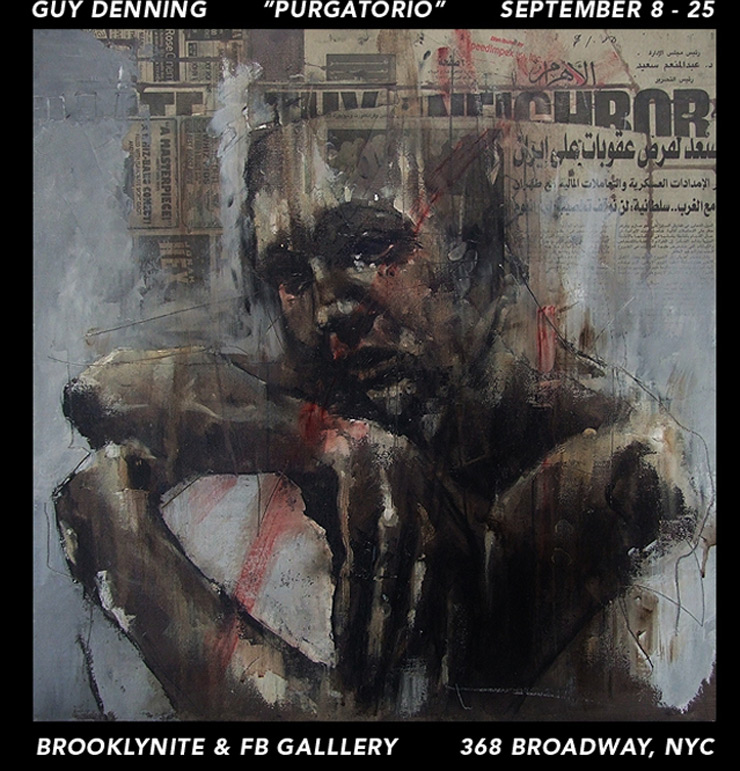 On the heels of his highly successful “Inferno” exhibition in Italy earlier this year, Guy Denning presents the second of his three part series of oil paintings on Dante’s Commedia in New York City for the aptly titled exhibition, “Purgatorio”.

Originally drawing inspiration from Dante’s writings, Guy’s intention has not been to recreate the poem in a visual or literal sense, but instead let it act as a framework for his own personal interpretation. As with the writing of Shakespeare, Guy finds a perpetual relevance in Dante’s work where the specifics of name, situation and place are easily adapted to the modern world; as if time moves on but the problems of humanity remain essentially the same.

The events of September 11th and the emotional toll it took on the American individual is final and critical element to this body of work. Guy suggests that the suffering of America is too often defined by the media in terms of the political rather than the personal, leaving the individual voice of ordinary people sometimes unspoken in the narrative of history. His work sets out to make a small and personal amendment to that omission. Poignantly enough, this exhibition will be held in a NYC ‘Pop-Up’ location just blocks from Ground Zero and on the 10 Year Anniversary of the 9/11 attacks.

The work, though tied to Dante’s writing will also feature elements of images found on the internet, particularly of people in New York City on that terrible day. Significant press images are also used as reference for Guy’s work in hopes that they will be scrutinized that much more intensely than the photos we glance at far too quickly in newsprint. He has also constructed one large landscape painting, in the fashion of the traditional ‘history’ genre, made from connected canvas panels. This oil painting, derived from studying still frame images from amateur video footage, aims to create an assumed and complete narrative of the major elements of the day from a New York perspective.

Guy states that this is a collection of work recognizing the suffering of the American people on September 11th and immediately thereafter – when the United States had the sympathy of the world. He wants it to be viewed as nothing short of respectful to the memories of all those that died and suffered as a result – both in New York and beyond. Guy quotes another English artist William Blake who wrote “Can I see another’s woe, and not be in sorrow, too? Can I see another’s grief, and not seek for kind relief?” Despite the many cultural differences of the peoples of the world we are all essentially united by our humanity; our common desires, hopes and despairs. It is the ordinary people’s common humanity that will take us forward and not politically inspired violence.

Wall/Therapy 2015 Day 4
“Love is Sacrifice” says the calligraphic script on the new wall by Jeff Soto and Maxx242. The two words rarely appear one without the other, as any sentient being will tell you. Maxx242 . Jeff S...
Olivia Laita, Wishes And Hopes For 2019
Olivia Laita, Curator, Arts Manager with ONO'U Festival in Tahiti, Founder of Aotearoa Urban Arts Trust in Auckland, New Zealand Why this photo? This photo captures a point in current time here in Auc...
BSA Images Of The Week: 08.16.20
Welcome to BSA Images of the Week. Kamala and identity politics are IN, workers are OUT, and the US Postal Service is being dissembled before our eyes. Are we supposed to find a light-hearted rej...
Turbulent Waters In The Black Sea From Jake Aikman in Kiev
“Getting a feel for dramatically upscaling my process,” says London born Jake Aikman as he brings a foreboding and riling image of the Black Sea to Kiev in the Ukraine. Primarily a studio painter back...
NRNY Mural Program with "Street Art For Mankind" in New Rochelle, NY
An hour north of New York City in the wealthiest county of the state, a new mural program extends the reach of organizers Audrey and Thibault Decker of Street Art for Mankind. They say that they have...
Brooklyn Street Art Brooklynite Gallery FB Gallery Guy Denning Manhattan NYC