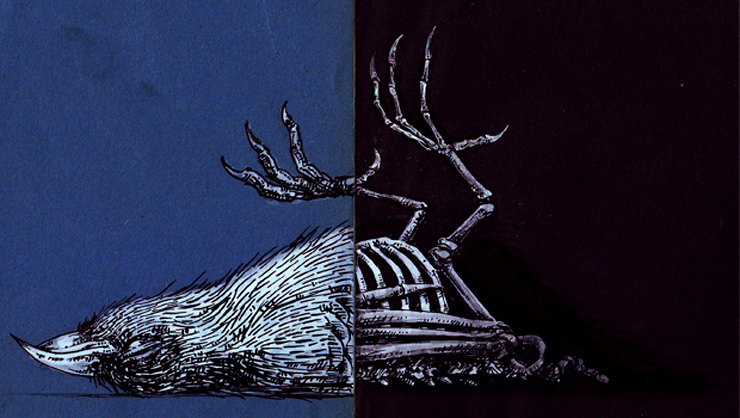 The Viennese Art Gallery INOPERAbLE presents works of one of the most highly regarded artists of the street art movement, ROA.

INOPERAbLE gallery will show the latest work of the Belgian artist, including installations, paintings on found objects, and original drawings. ROA will also present his limited edition hand bound book “ROA: An Introduction To Animal Representation” (Mammal Press). A limited number of copies of the books, which include his first ever print, will be available at the opening.

ROAs work indoor is just as fascinating and innovative as those created outdoors in urban and suburban areas. The artists original works have solidified him as an undisputed key figure in the Urban Art movement. Recently a work of ROA was scheduled to be removed by the Hackney city council, however an overwhelming reaction from the local citizens helped save the work. Similarly numerous works by Banksy were “rescued”, again marking ROAs signifigance in the contemporary art scene. Animals are the central theme in ROAs artistic universe. His monumental rabbits, birds, rats or fish, usually in black and white, can be found in cities like New York, London, Paris, Berlin or Mexico. Hefocuses on the fauna of the region, merging them naturally and seamlessly into the environment. Often the decompossing creatures reflect the artists critical view of society around the walls where he works. The bold and large scale murals of ROA confrontﾊ viewers and provide a break in their hectic everday lifestyle, if only just for a moment.

Over the last half decade, ROAs work has been exhibited internationally in solo and group exhibitions. Most notably ROAs work was shown in the internationally acclaimed exhibition “Art in the Streets” at the Museum of Contemporary Art (Los Angeles) alongside Banksy, Swoon, Barry McGee, Space Invader, Basquiat, JR, Os Gemeos and many more. ROA spends much of his time traveling the world, visiting cities and villages of all sizes. This summer he was invited to Gambia along with a handful of active Street Artists to paint murals in small villages, which are usually ignored by tourists. The project was meant to encourage “whites” to stop in these towns to admire the works and support the local businesses, rather than just throw candy out of the window to the children.

ROA will spend the month of August in Vienna as Artist in Resident at Museums Quartier. With the help of the MQ and INOPERAbLE, ROA will spend much of his time creating awe inspiring works around the city. Keep your eyes open for new works as he hits up the capital of Austria, and prepares for his solo exhibition at INOPERAbLE.