One of the many cool things about this LA experience is that artists took the charge of “Stories” in a variety of directions. The observation that we have had for a few years now, and the one we talked about to whomever we met last week, is that many of today’s street artists are telling personal or political or socially relevant stories with their work. 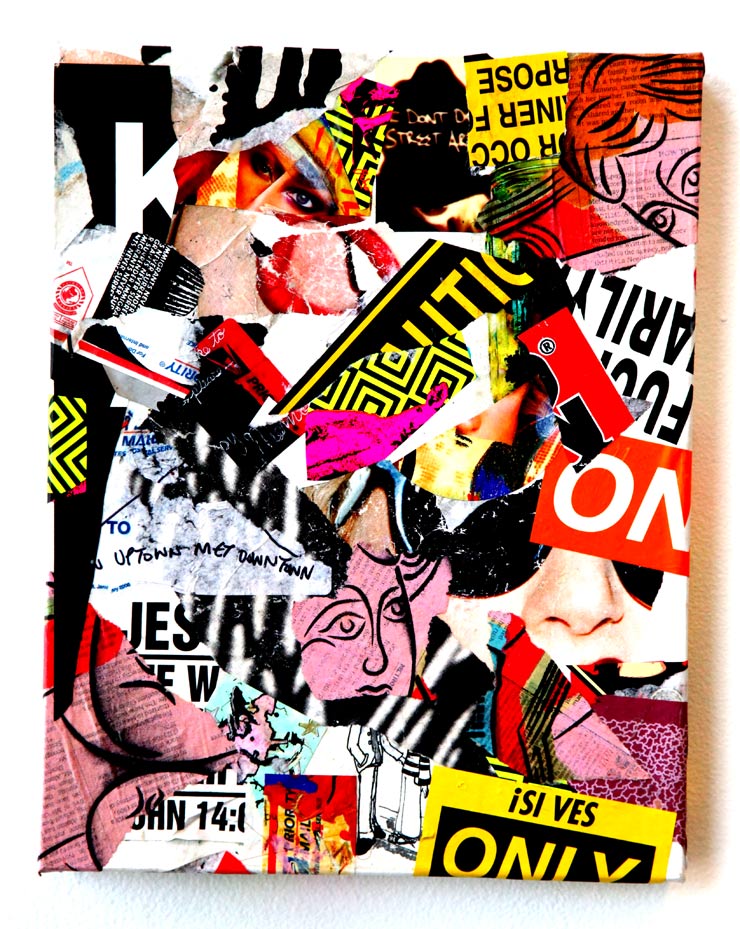 No stranger to experimentation and stretching his own creative boundaries, our most storied participant in the show of course is the graffiti writer and fine artist Futura. With a well documented career dating back to the late 60s and early 70s, the Brooklyn artist could easily be disinterested in whatever is happening on the street today, and no one would blame him. But rather than complacently re-telling stories about the past, you’ll find that Futura is just as engaged and inquisitive about others and about what is happening as ever. 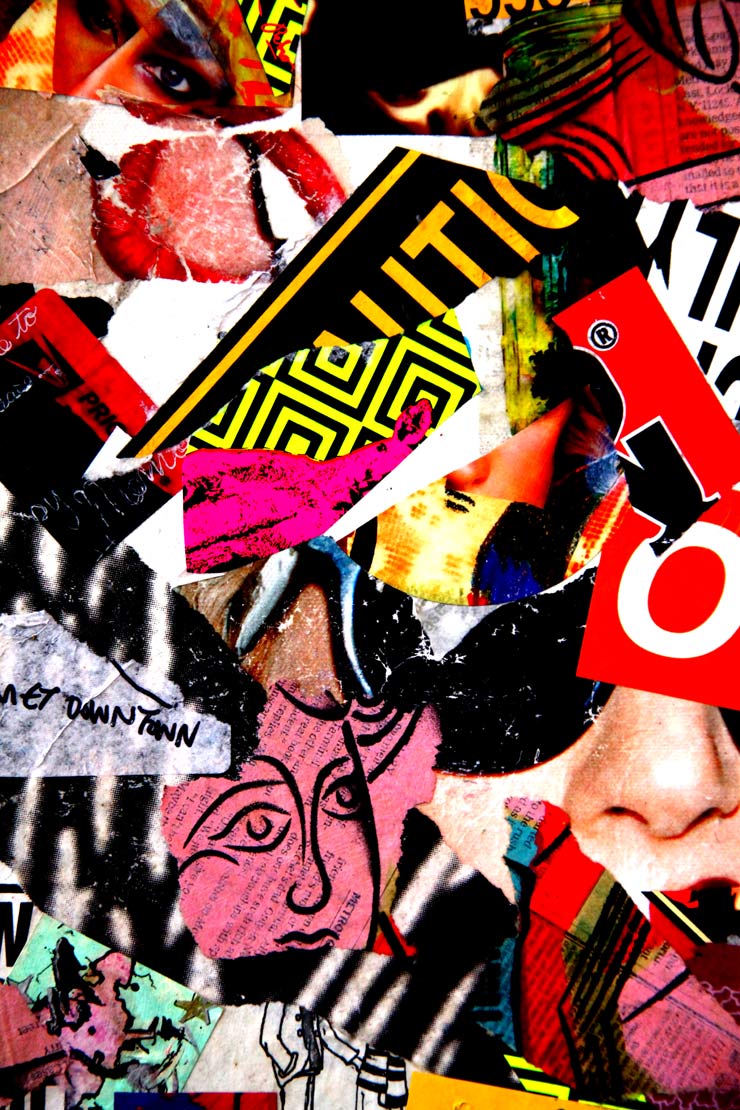 Futura’s mind is too alive, his wanderlust unsatiated, his sense of humor too sly to just lay back on his laurels.  In fact he pulled a fast one on us by creating a collage of stuff he pulled off of walls in Brooklyn! By peeling off stickers from other artists and pieces of  ads from walls in Brooklyn he re-created a piece of a wall or a door from 2011 and signed the back with his own tag.

A pretty edgy approach, and yet it couldn’t have been more appropriate – and timely as more of the scene than ever is pushed with stickers. One of the slaps he included actually is by another artist in “Street Art Saved My Life”! Can you identify it?

Nuart Journal Punches Forward: "Eloquent Vandals," Vol 1, No. 2
The nascent voyage of ‘Nuart Journal’ comes slowly into view as a softly bound Street Art/graffiti cultural preservation document; its glossy cover is purple for issue Number 2, like a thick royal-co...
BSA Images Of The Week: 03.19.17
Here’s our weekly interview with the streets, this week featuring: Baron Von Fancy, City Kitty, Claudio Dre, Consumer Art, Ethan Armen, Humenbote, Jerk Face, Mr. Sis, Pantonio, Paola Delfin, Par...
Valencia Dispatch: Illustrators, Thinkers, and Riddles
Thought provoking, curious, underplayed. There is a certain circumspect quality to the Street Art scene in this seaside city in Spain that ranks third in population but which may be vying for the Stre...
Rosie the Riveter says "We Can Do It!" : Dispatch From Isolation # 25
Rosie the Riveter has been working hard to raise awareness of political and social causes ever since the character was a propaganda tool for the "war effort" in WWII. The image of strength and defian...
Isaac Cordal: "Ego Monuments" Mock in Montreal Gallery Show
The evolution of an artist's practice is something we feel very privileged to observe over time and we revel in the successful steps forward that any artist takes, preferring to see it as an act of c...
C.A.V.E. Gallery Futura Jaime Rojo Steven P. Harrington Street ARt Saved My Life ThinkSpace